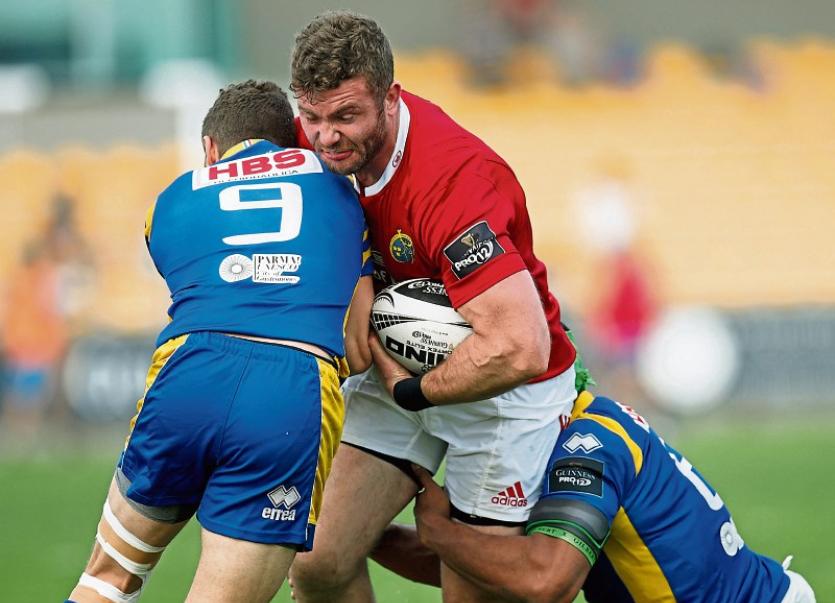 MUNSTER jumped up to second place in the Guinness Pro12 table after racking up seven tries in a convincing 50-14 bonus point win over Zebre at the Stadio Sergio Lanfranchi in Parma on Saturday.

The victory was a timely one for Munster, coming just seven days before the province’s glamour European Champions Cup quarter-final clash with Toulouse at Thomond Park on Saturday, April 1.

Niall Scannell and Tommy O’Donnell finished off well worked forward tries for Rassie Erasmus’ side, before winger Ronan O’Mahony, the province’s top tryscorer this season, sped in for Munster’s third try of the game.

With New Zealand out-half Tlyer Bleyendaal converting all three, Munster were out to a 21-0 lead before their hosts fired a shot. That came via the Zebre pack and Derick Minnie who just about kept his side in touch by the interval.

Zebre scored again through Lloyd Greeff, but not before Rory Scannell secured the try bonus point soon after the resumption, Zebre’s task not getting any easier when Marcello Violi saw yellow at the same time.

O’Mahony took advantage in securing his brace, a feat that was also matched by replacement prop James Cronin on his return from injury to see Munster secure a half century on the scoreboard and finish up as more than deserved winners.