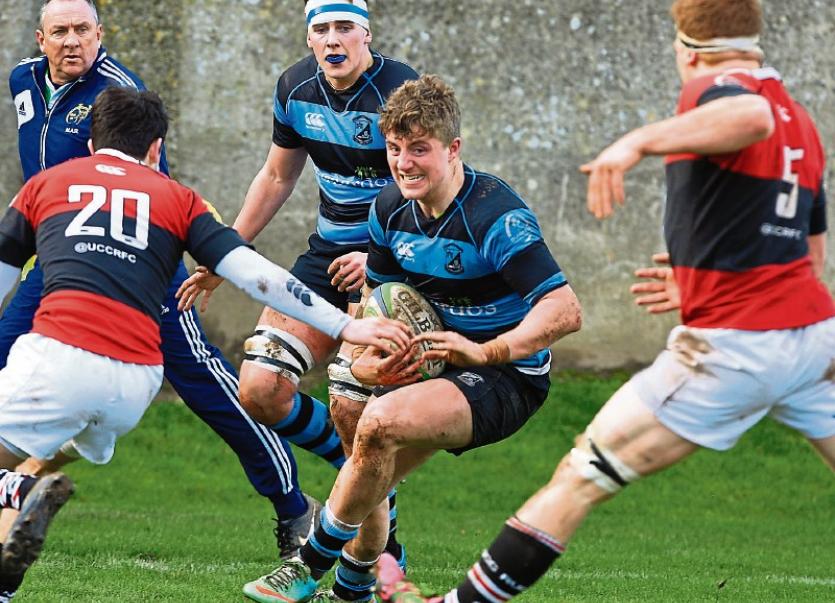 THE Ulster Bank League continues this Saturday with the challenge faced by the two Limerick side's in Division 1A increased significantly by a clash with Munster's British and Irish Cup quarter-final.

Both second-placed Young Munster, who face Dublin University at Tom Clifford Park and eighth-placed Garryowen who entertain high-flying Clontarf at Dooradoyle will be missing players who are involved in Munster A's B&I Cup quarter-final with Ulster at Musgrave Park on Sunday.

Both of Limerick's top flight clubs also have players who will be involved in the Ireland U-20s squad which faces Wales in the 6 Nations championship over the weekend.

Saturday's fixtures are crucial for both Munsters' and Garryowen who suffered defeats last weekend.

Young Munster's hopes of securing a home semi-final in the play-offs were dented 20-13 defeat to UCD at Belfield.

The result leaves second-placed Munsters' just one point ahead of third-placed Cork Con in Division 1A table with now just four series of regular season fixtures to come. Munsters' are odds-on shots to secure an actual play-off place as they currently enjoy a significant 13-point lead on fifth-placed St Mary's College in the table.

Garryowen's need for points this Saturday is equally great as the Dooradoyle side is now hovering just five points clear of the relegation play-off place following their 19-3 defeat to Dublin University last weekend.

Saturday's opponents Clontarf will arrive in Limerick in confident mood following their victory over Lansdowne on Friday night.

Meanwhile, Limerick's two representatives in Division 1B, UL-Bohs and Shannon, will be looking to build on excellent weekend wins.

Second-placed UL-Bohs, fresh from their excellent weekend win away to Ballymena, host ninth-placed Galwegians at UL 4G rugby pitch on Saturday in another crucial fixture in their promotion bid.

UL-Bohs are currently 10 points clear of fifth-placed Ballynahinch in their bid to secure a promotion play-off ‘position. A top four finish will guarantee a play-off slot for the Annacotty side.

Meanwhile, Shannon will look to pull further clear of the relegation zone when travelling to third-placed Naas on Saturday. Shannon, following their weekend win over UCC, are now four points clear of Galwegians who occupy the relegation play-off place in Division 1B.

In Division 2B, promotion-chasing Old Crescent host seventh-placed Skerries at Rosbrien. Crescent scored an impressive 17-0 away win over Bective Rangers last time out.

Also in 2B, bootom side Thomond who picked up two bonus points in their 28-22 home defeat to MU Barnhall last weekend, make the long trip to sixth-placed Dungannon.

In Division 2C, promotion-play-off chasing Bruff will look to get back to winning ways when making the trip to second-placed Sligo.