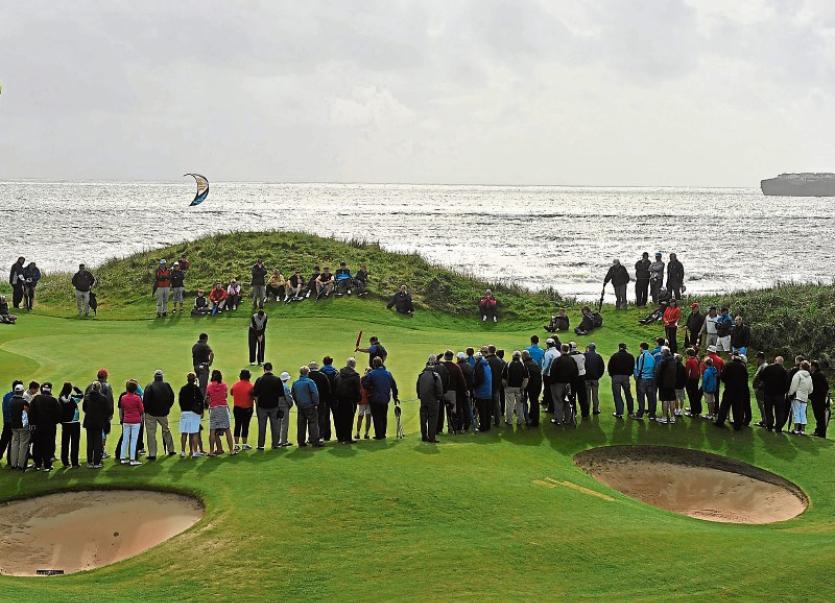 The prestigious Arnold Palmer Cup Matches involving the best collegiate players worldwide, male and female, is coming to Lahinch in 2020.

Since its inception, 101 (so far) former Arnold Palmer Cup participants have gone on to earn playing rights on the USPGA or European Tours and 22 have figured for Europe or the USA in the 'real' Ryder Cup, which speaks volumes for the standard of player involved.

It's something really worth looking forward to and it will put golf in the Midwest under the spotlight on a world stage.

Co-founded by Arnold Palmer and The Golf Coaches Association of America (GCAA) this annual event began at the Bay Hill Club & Lodge in Florida in 1997 and is now played all around the globe in a Ryder Cup-style format except it is the USA versus the Rest of the World.

At Lahinch, and from 2020 onwards, a new and very welcome addition to the Palmer Cup will see women and men representing their nations as playing partners. Commenting on the decision to award the 2020 Arnold Palmer Cup to Lahinch, Club Captains Gerry Pierse and Angela Cullinan said, “This is a great honour for Lahinch.

“ It is also, we believe, recognition of the Club’s support and encouragement for the amateur game stretching back over a century, with the hosting by the Club of the first South of Ireland Championship in 1895 and the Irish Ladies Close Championship in 1904.

“We have no doubt but that the experience of competitive golf on a classic links course will create lasting memories for the young men and women who are selected to represent their respective teams.

“As a Club we will do all in our power to ensure that the tournament is true to the ethos of the game and the vision of Mr Palmer by using our friendship in golf as one of the great avenues for communication and understanding between the nations of the world.

“Above all we can assure all visitors to Lahinch who come to participate, whether as player, spectator or administrator, a truly unique and wonderful Irish welcome.”

Lahinch Golf Club, founded in 1892 by a group of Limerick businessmen led by Alexander Shaw, is celebrating its 125-anniversary this year.

The Lahinch Club Council has approved an exciting additional calendar of events to celebrate this special milestone in the Clubs history beginning on Good Friday, 14th April when a bronze plaque will be unveiled at the Post Office, Main Street, Lahinch (the original site of Sharry’s Hotel where the Club was founded) followed by the Captains’ Drive-In at 5.30pm & reception for members and invited guests in the clubhouse.

Augusta natonal - a Horticulturist's Paradise In A Sea Of Green

We are looking forward to the Masters Tournament in the second week of April because when people look forward to The Masters, thoughts of flowering shrubbery, graceful dogwoods and blazing azaleas, combining with dazzling, green grass are often the first thing they think about.

Before it became a golf course Augusta National had been the famous Berckman's Nursery for generations. Some of the property’s most spectacular features were incorporated into the course routing as it was being built.

The large oak in front of the Clubhouse and the dozens of magnolias lining the Club’s renowned 330-yards long, driveway—date back to the 1850s. The wisteria running down the Aphanite tree next to the Clubhouse is believed to be the largest in the USA.

From the staging of the very first Masters (then called The Invitational) in 1934, Augusta was always a golf course with as many visual delights as golfing strategies.

It's extraordinary because there is nothing 'special' about the surrounding countryside. There are no mountains, lakes or sea views in the backdrop. And yet, every golfer who has been to Augusta considers it a kind of heaven on earth.

Everywhere you look there is flora among the giant, loblolly pine trees—many of them over 75-feet tall. Unless you’ve been to Augusta it's impossible to imagine how beautiful it is in reality until you actually go there in person.

Each hole is named (see below) for a tree or shrub and almost all of them could be grown here in Ireland.

If the soil is right, acidic or alkaline as the case may, why not have a little piece of Augusta on your own golf course or better still in your home garden? 1-Tea Olive; 2-Pink Dogwood; 3-Flowering Peach; 4-Flowering Crab Apple; 5-Magnolia; 6-Juniper; 7-Pampas; 8-Yellow Jasmine; 9-Carolina Cherry; 10-Camelia; 11-White Dogwood; 12-Golden Bell; 13-Azalea; 14-Chinese Fir; 15-Firethorn; 16-Redbud; 17-Nandina; 18-Holly.

Depending on the weather and when the peak blooms occur, Augusta National is more resplendent during Masters week some years than others but even in an “off” year - the display is unique in golf and viewers with no interest in the developing contest will tune in because the action is happening in such a beautiful place.

Augusta fever! The course and setting is so thrilling. Once you get a taste of being in contention it drives you nuts. It doesn't allow you to play your normal, comfortable game, because you want to win too much - Johnny Miller