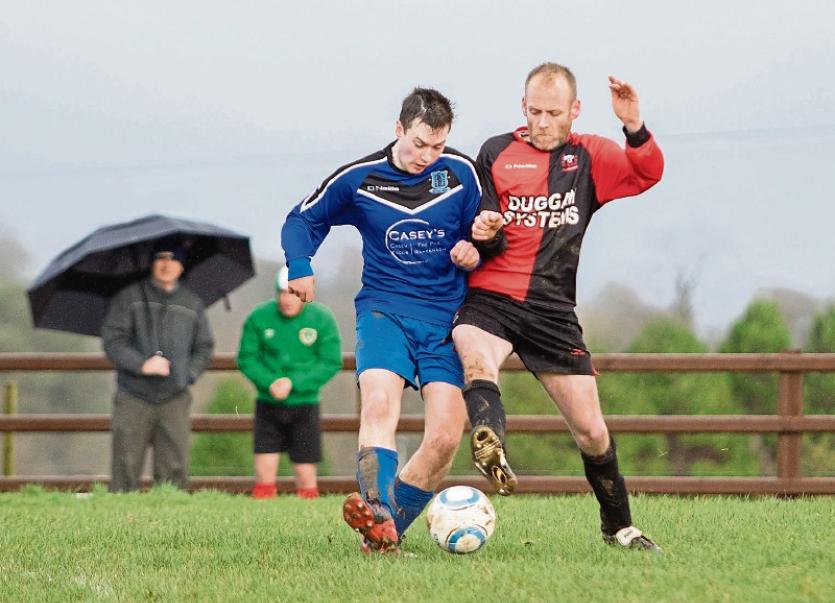 The only game played on Saturday was the Desmond Youths Cup quarter-final between Rathkeale and Abbeyfeale United. The home team were favourites as they are still in contention for the League title and will finish at least 12 points ahead of Abbeyfeale.

However, in a shock result, it was the Fealesiders who advanced to a semi-final meeting at home to Newcastle West Rovers with a 5-4 win on penalties after a 1-1 draw.

There was limited goalmouth action in a scoreless first-half but stand-in skipper DJ Stack opened the scoring for the visitors in dramatic style in the 55th minute, brilliantly driving a free-kick from the left side of the penalty area into the far corner of the net.

While finding the target was Stack’s intention as he stood over the ball, I doubt if the same can be said for Rathkeale striker, Eoin Kelly, as he stood over a free-kick five yards inside the opposition half in the 82nd minute.

He was hoping to pick out a team-mate and was as surprised as anyone else when his delivery bounced into the net.

Rathkeale came closest to a winner after that but there were no further goals in normal time or extra-time and so it went to a penalty shoot-out.

The turning point came when Jack Fitzgerald fired wide with Rathkeale’s fourth, which was followed by Cillian Cotter putting Abbeyfeale in front.

Jack Harnett then scored for Rathkeale on his second attempt, referee Tom Fitzpatrick, who had a very good game, judging that goalkeeper Bill Lucey had come off his line in tipping Harnett’s first effort over the bar.

It all came down then to Killian Healy and the striker didn’t disappoint, sending goalkeeper Mark White the wrong way.

With their own pitch unplayable, Ferry Rangers conceded home advantage to Athea United in their Desmond Cup 3rd round tie. Athea led 1-0 at half-time with a goal from Kevin Murphy, who doubled the lead in the second-half.

His brother, Darren, made it 3-0 and it was Darren who then completed the scoring after Niall Foley had scored a consolation goal for Ferry.

Adare United are through to the Richard Hogan Cup Final after winning 3-0 on the Manor Field astroturf pitch against St. Ita’s, who conceded home advantage. Jack English scored  a hat-trick.

Broadford United remain on course to retain the Premier Division League Cup after a hard-earned penalty shoot-out victory away to Glin Rovers in tough conditions.

Darren Sheehan opened the scoring for Glin with a free-kick in first-half injury-time. Broadford equalised midway through the second-half when a Micheal Brosnan shot was parried by Sean Lyons and Timmy Larkin converted the rebound.

The visitors went in front in the 76th minute when Brosnan headed to the net from a Dylan Kelly cross. That looked to be enough but then Paul Sheehan’s injury-time equaliser ensured extra-time, in which there were no further goals. Broadford won 3-2 on penalties.

NOTE: All other games were off due to the wet weather.