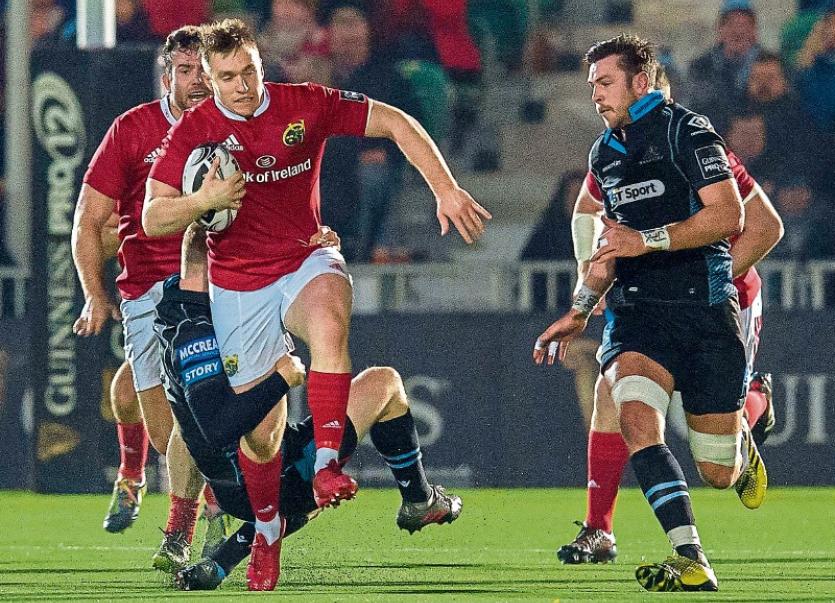 CENTRE Rory Scannell might be set to compete with an All-Black and a Springbok for a starting place in Munster's midfield for key upcoming games, but he doesn't seem fazed in any way by the idea.

But then why should he? Scannell has made huge strides at Munster over the past 12 months,

Scannell has made 12 starts for Munster this season, including all four Champions Cup fixtures, on the back of his breakthrough season in 2015-2016 when the 23-year-old racked up 26 appearances in all, including 20 starts.

Last season, Scannell and All-Black Francis Saili formed a formidable midfield pairing, and while the New Zealander was injured through the opening months of this season, the Cork man forged a new impressive partnership with Springbok jaco Taute. With Saili fit once more, competition for starting places in the centre at Munster has rarely been more keen.

Scannell said: "Last season I broke into the first team, every week I have just been trying to do my best, keeping improving. There is plenty of competition now in the backs and the forwards which is great.

"We have Francis (Saili) coming back, every week there are a few great players who are not even making our 23, but I think it is making us better as a team.

“Everyone knows that when they are give a shot they have to perform or the next guy will come in and do a job. I'm trying to do my best at the moment with the shots I have been given."

So how does playing with Taute differ from lining out alongside Saili?

Scannell said: "Obviously they are both internationals. I have learned a lot from both of them. Last season was very exciting playing with Frankie because he is such an attacking threat and he has that flair where he can just open up a game.

"Jaco would be slightly different. He is probably a defensive leader in our squad now and I have learned a lot defending inside him. I have learned a lot from both of them. It is great having them both back fit now and we can chop and change the combinations which is good.

"Obviously they are both very experienced players and when I came into the team last year, I hand't a huge number of caps under my belt.

“Frankie was a great help to me, helping me improve and Jaco has been the exact same this year. He is a Springbok and has been around the block with the Stormers. For me, personally, I think I have developed quite well playing alongside both of them."