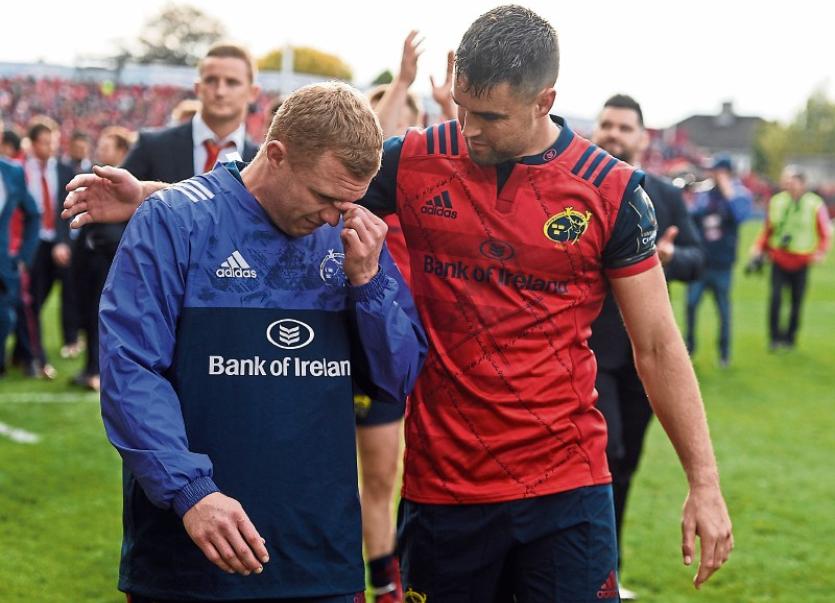 MUNSTER winger Keith Earls has issued a statement ‘unreservedly apologising’ for his actions when sent off against Glasgow Warriors in the Champions Cup in October and for a subsequent media interview he did in relation to the incident.

European Professional Club Rugby (EPCR) had carried out an enquiry into statements in the media by Earls who was suspended for two weeks as a result of his sending off for a dangerous tackle on the Glasgow Warriors hooker Fraser Brown.

Earls said he was issuing a statement this Monday in a bid to put the matter to bed as the fall-out from the incident has ‘rumbled on for a number of weeks’ of his own doing.

Earls statement read: “I wish to address my part in the Champions Cup Munster v Glasgow Warriors game and a subsequent interview I held, as the incident in question has rumbled on for a number of weeks and in addressing this I hope to put to bed a matter that has escalated because of my own doing.

“In a poorly worded interview on my part I failed to acknowledge that I apologised to Fraser Brown for my actions during the Munster v Glasgow Warriors game.

“I also failed to confirm that I acknowledged I had committed an act of foul play, and fully accepted the corresponding sanction, apologising to Glasgow Warriors and EPCR for my conduct.

“I have since written to EPCR once again confirming my acceptance of the disciplinary decision and outcome. I have also addressed the misunderstanding directly with Fraser and unreservedly apologised again for my actions and the wording I used during the interview.”

In a separate statement, the EPCR noted that in a subsequent media article, Earls was quoted in such a way that ‘suggested that he did not accept that he had committed an act of foul play, and that in his view his role in the tackle was not something for which he needed to apologise.’

The statement continued: “EPCR wrote to the player to enquire about this. In his response, Earls made it clear to EPCR that he acknowledges that the tackle in question had been an act of foul play on his part and that he sincerely regrets his role in the tackle.

“He also acknowledged that it had been wrong of him to have suggested otherwise when speaking to representatives of the media, when he has a responsibility to uphold the image of the game, and he offered an unreserved apology to EPCR.

“In light of all of the circumstances, EPCR has accepted Keith Earls' position and no further action will be taken.”