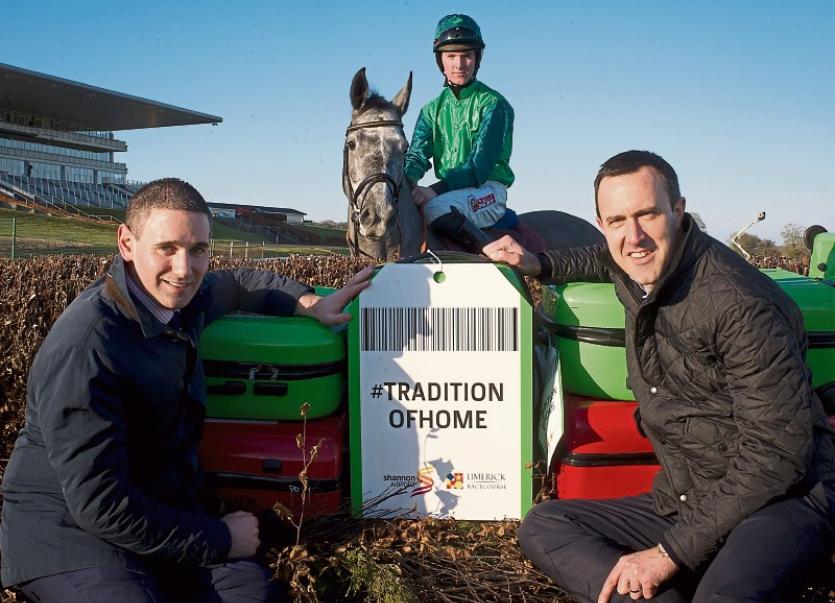 THE biggest racing festival ever staged in the Mid-West, the Shannon Airport Christmas Racing Festival at Limerick Racecourse, is this year set to break records for both attendance and prize money.

The annual festival, which is the biggest gathering outside of Dublin across the Christmas season, takes place from Monday, December 26 to Thursday December 29 and is expected to break the 40,000 attendance mark.

At in excess of €450,000, the prize money on offer will be the most significant yet for the festival, which is the biggest celebration of the year in Munster of National Hunt racing.

With just over three weeks to go, pre-sales are already suggesting that this year’s festival will break all records, with more sales than ever booked this far out.

The four day festival will kick-off on St Stephen’s Day at 12.25pm, with the card boasting seven National Hunt races each day, and concluding at around 3.50pm daily but followed by live entertainment to keep the festive spirit soaring in the Munster Suite.

Limerick Racecourse and Munster Rugby have teamed up once again to bring you a fantastic day of great sporting action with an all in ticket for the races, race-card, shuttle-bus service and match tickets for Munster vs Leinster in the Guinness Pro12 at Thomond Park on St Stephen’s Day.

Following the excitement of the opening day, Tuesday is ‘Sporting Limerick Day’ with an opportunity for punters to receive a free €5 betting voucher if they wear their club colours.

Wednesday includes the Sunway Holidays’ Most Stylish Ladies Day, which will see a holiday for two also up for grabs, while Thursday concludes with a special family day event, including face-painting, party games and much more. Children under 16 years will enjoy free admission to the races on all four days of the festival.

Food will be served by the award winning Fitzgerald’s Woodlands House Hotel team from Adare, spoiling race goers with their array of fresh fare served in the panoramic restaurant, private suites and self-service restaurant in the Munster Suite.

Tickets for the event, including hospitality packages, can be booked on www.limerickraces.ie or by calling 061-320000 or email info@limerickraces.ie.

Launching the festival, Shannon Airport CEO Matthew Thomas said: “In a region passionate about its sport, this festival has carved out a special place in the annual calendar.  It is now very much tradition for racing fans and, indeed, those just looking for some excitement over the Christmas season in the region.

“We’re delighted to support the festival again this year as it not alone brings people together for a celebration of national hunt horse racing but it is also a great social event.

“The team at Limerick Racecourse really go all out to put together a festival that is really a highlight of the festive season, whether you are a horse racing fan or otherwise.”

“From a racing perspective, it shines a light on some really promising horses for the remainder of the season. In the past names to feature here have included the likes of Faugheen, Martello Tower, Gilgamboa and Weapons Amnesty, who have, of course, gone onto great things so there will be a close look for where the form is again this year again.

“Racing festivals are, however, about more than what happens on the turf and this particular festival has truly built up over the years into the biggest social event of the Christmas season outside of Dublin.

“We expect to have close to 40,000 people here over the four days and they will get a brilliant mix of excitement on and off the track.  We’ve put a huge amount of effort into building the festival into what it is today, which is an event for all - horse racing enthusiasts, those who merely come for the fun and it’s very much for all ages as well.”

Speaking of the partnership with Shannon Airport, O’Neill added: “Shannon is now in its third year as title sponsor and they have been perfect partners for us as they know all about being at the heart of community, which this festival is very much at Christmas.

For further details, go to www.limerickraces.ie.