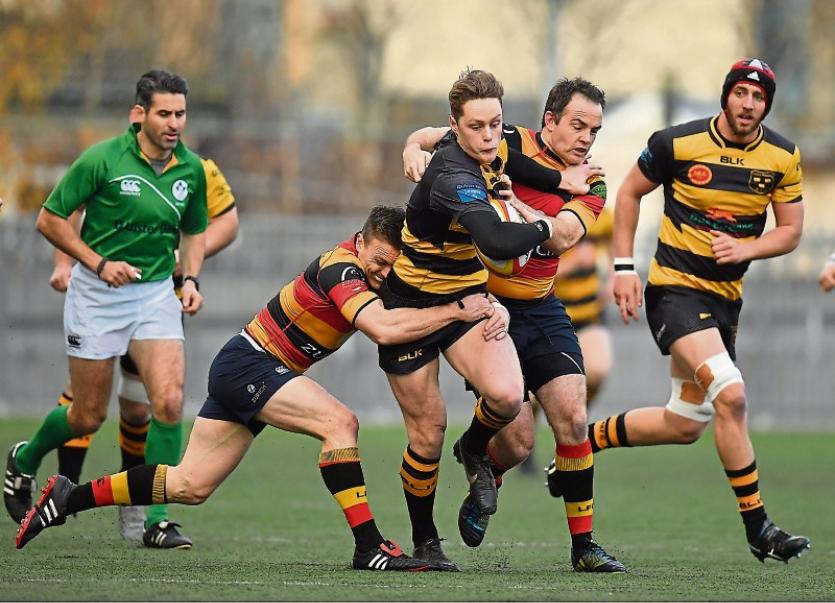 FOUR Limerick clubs recorded precious Ulster Bank League wins on the final Saturday of action before a seven-week break for Christmas and the New Year.

In Division 1A, improving Garryowen moved up to fourth place in the table after recording a thrilling 41-26 bonus point victory over basement side Terenure College in a free-scoring affair at Dooradoyle.

Garryowen, who have picked up 14 points from a possible 15 in their last three fixtures, led 29-17 at half-time. The Light Blues’ six tries came from a Steve McMahon hat-trick, with Conor Oliver and Dave McCarthy also touching down, while the home side was awarded a penalty try after winger Liam Coombes was impeded as he chased a grubber kick through.

In the same division Young Munster slipped to third place in the table after suffering a 30-24 defeat to leaders Lansdowne on their 4G pitch in Dublin 4.

Munsters, who are now five points behind Lansdowne in the table and one point adrift of second-placed Cork Con, trailed 12-20 at half-time against their hosts.

Munsters will take some comfort from taking a try bonus point and a losing bonus point from the fixture.

Meanwhile, in Division 1B, second-placed UL-Bohemian kept up the pressure on leaders Buccaneers when scoring a dramatic 18-17 victory over UCC on UL’s 4G rugby pitch.

A Robbie Bourke penalty goal with the last kick of the game helped the Annacotty side score a vital win against their fellow students.

UL-Bohs had looked comfortable at half-time as tries from Joey Conway and Harry Fleming, one of which was converted by Bourke, helped the Red, Red Robins into a 12-0 interval lead.

UCC stormed back however and were leading 17-15 late on, only for Bourke to kick the home side to a dramatic victory.

Also in 1B, Shannon remain rooted to the foot of the 1B table after shipping a heavy 53-12 thumping at the hands of Galwegians in their relegation battle at Crowley Park.

‘Wegians ran in three first half tries to lead 25-7 at half-time. Shannon replied with a ty from Greg O’Shea, converted by Conor Fitzgerald.

The Galway side scored four further tries in the second half to bring their tally for the game to seven. Shannon’s sole reply was a Niall Mulcahy five-pointer.

In Division 2B, ninth-placed Thomond suffered a heavy 45-7 home defeat to Greystones.

Thoond, who have a single win and a draw from their opening 9 games, sit just four points ahead of bottom side City of Derry.

There was better luck for the Limerick clubs in Division 2C, however. Old Crescent are fifth in the table after securing a hard fought 15-14 win away to Dungannon, while Bruff lie seventh heading into the Christmas and New Year’s break after seeing off leaders rainey Old Boys 15-11 at Kilballyowen Park.

Old Crescent, trailed 5-7 at half-time, with Val McDermott touching down for the Limerick side at the break. When Dungannon jumped into a 14-5 lead after 50 minutes, Crescent were facing an uphill battle to take anything from the game.

However, the Rosbrien side stormed back with Brendan Guilfoyle’s try, converted by Shane O’Brien on 70 minutes reducing the Ulster side’s lead to two points, 14-12.

O’Brien then showed superb composure late on to land the match-winning penalty goal.

Bruff made it three wins on the bounce in 2C with their gritty victory over table toppers Rainey Old Boys.

Bruff, who led 15-6 at half-time, had tries from Davy O’Grady and Neilus Keogh. While Bruf failed to score in the second period, the South Limerick side restricted their visitors to just a single try in the 76th minute.