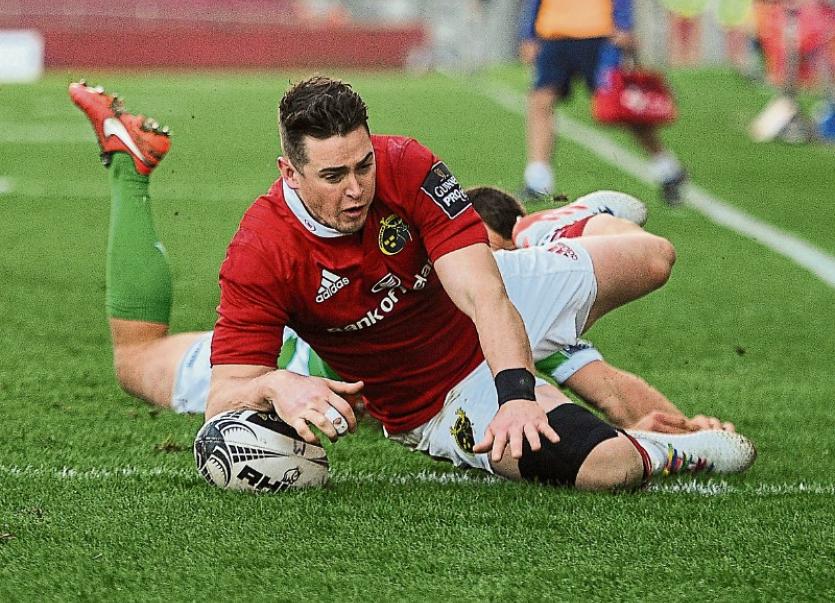 MUNSTER stormed to the top of the Guinness Pro12 table after scoring a facile 46-3 bonus point victory over basement side Treviso at Thomond Park on Saturday.

Munster ran in seven tries in a facile victory, with full-back Andrew Conway and Ronan O’Mahony helping themselves to a brace of touchdowns, while Robin Copeland, Darren O’Shea and Alex Wootton, his first senior try for Munster, also dotted down.

O’Shea’s 42nd minute try, his first five-pointer in the Pro12, sealed the bonus point for Rassie Erasmus’ side which had began the game slowly and were level 3-3 with the visitors towards the end of the opening quarter.

In-form Munster have jumped one point ahead of second-placed Leinster and two points clear of the third-placed Ospreys in the Pro12 table.

Man of the Match Tyler Bleyendaal added three conversions and a penalty goal for a Munster side which led 22-3 at half-time before an official attendance of 12,196.

However, the actual number of spectators inside the ground was probably closer to 4,000-5,000 as the official attendance includes absentee season ticket holders.

The game saw for starts in the red of Munster for former Ulster centre Sam Arnold and New Zealand hooker Rhys Marshall.

Next up for Munster is a demanding Guinness Pro12 away fixture against Galsgow at Scotstoun on Friday night, 7.35pm, before the focus switches to the crucial back-to-back fixtures with Leicester Tigers in the European Champions Cup.