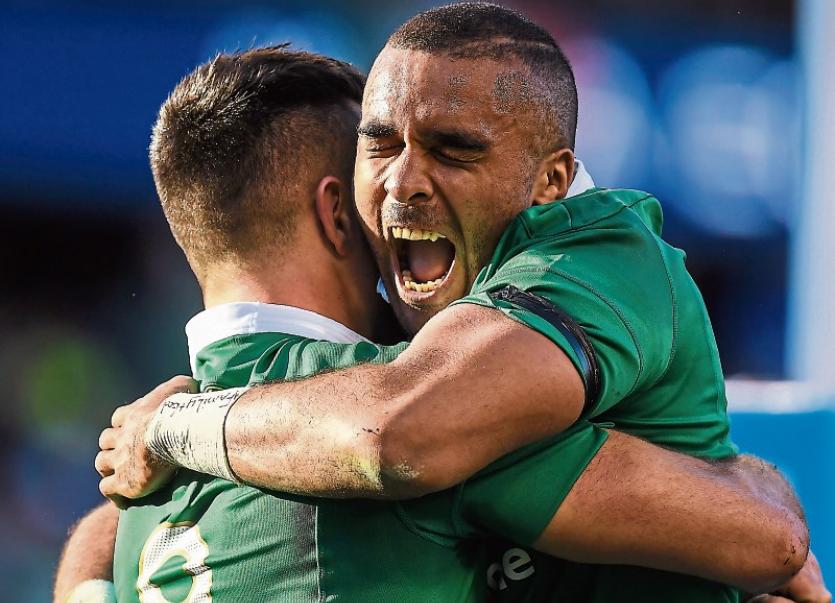 Simon Zebo is embraced by Conor Murray after the game Picture: Sportsfile

ANTHONY Foley’s family thanked the history making Irish players for paying a touching tribute to the Munster head coach prior to the kick-off of Saturday’s clash with the All-Blacks in Chicago.

The Ireland players formed a figure of eight during the All-Blacks Haka, putting the four Munster players in the team to the fore, as a mark of respect to the 62-time capped Foley who passed away three weeks' ago.

Following Ireland’s first ever success over New Zealand in 111 years of trying, Ireland captain Rory Best said: "It (tribute to Anthony Foley) just felt like the right thing to do and it was our way, as an Irish national team, just to show a mark of respect to Axel and his family.

"Obviously, there was a lot of emotion and the Munster boys got a lot from that. It was just an emotionally-charged day for us.”

In a post on the ‘Axel Foley Memorial’ Facebook page on Sunday, Anthony Foley’s family thanked the Irish players for their gesture.

The Facebook post read: “To say that we were touched by how Ireland faced the New Zealand haka, drawing inspiration from the No. 8, would be an understatement.

“Ironically, 15 years ago Anthony played for Ireland against and lost to New Zealand on a score of......40-29.

“Last night's Irish response to the Haka was incredible remembrance. Today is our second #8masses4no8 Sunday and we'll be remembering Anthony and all who have gone before us by lighting our candle. “