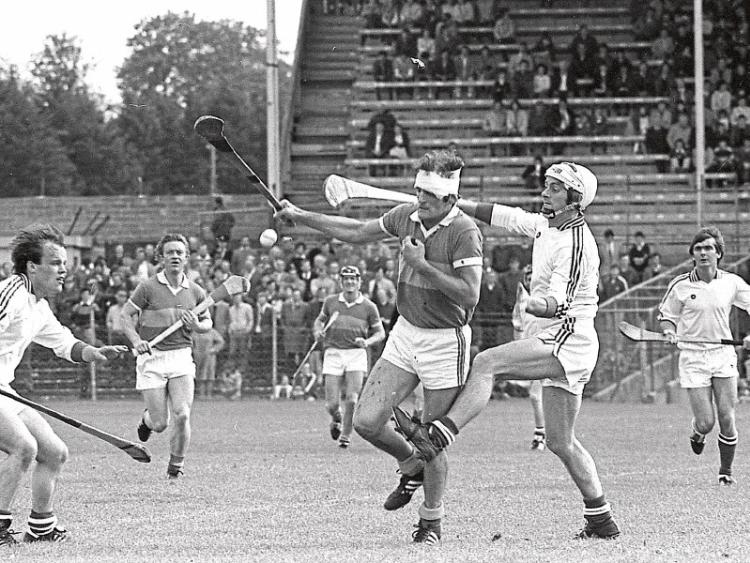 SEPTEMBER 11 1983 saw the parish of Patrickswell-Ballybrown collide in the Limerick SHC final in the Gaelic Grounds.

It was the first of the county senior hurling final meetings of the parishioners.

Thirty three years ago Patrickswell were the defending champions who already had seven titles in their roll of honour. The previous year Patrickswell had beat Bruree in the final. Indeed they progressed to reach the Munster club final, where they lost 1-9 to 0-11 to Tipperary’s Moycarkey-Borris.

In contrast the men from Ballybrown were appearing in a first ever final.

Patrickswell were managed by Michael O’Grady with former club and county star Phil Bennis as coach.

In the white corner was a management team of Teddy Hedderman, Jim Byrnes and Tom Ryan, while Donie Burke was trainer. Burke had previously refereed the ‘81 hurling final between South Liberties and Kilmallock.

Patrickswell were captained by Leonard Enright while Ballybrown’s captain was Tony Hall.

For the first time since 1971, this championship was run on an open draw basis with both sides playing four games to reach the final.

On county final day the opening half was even.

Terence Kenny and Christy Keyes had Ballybrown first half points while Patrickswell kept in touch with Ger Hayes and Terence Murray on the mark for the men in blue and gold.

Eddie Cliffe stretched the Ballybrown lead on the resumption of the second half but then Patrickswell powered towards the winning line.

Two men stepped forward – Liam Foley and Richie Bennins. Both found three points each in the half to move The Well into a winning position.

Liam Foley was to be named Man of the Match – an award presented by Des Fitzgerald Bookmaker of Ellen St and William St.

The curtain-raiser was the minor final, where Bruff were winners.