Mixed injury news for Munster ahead of Paris trip 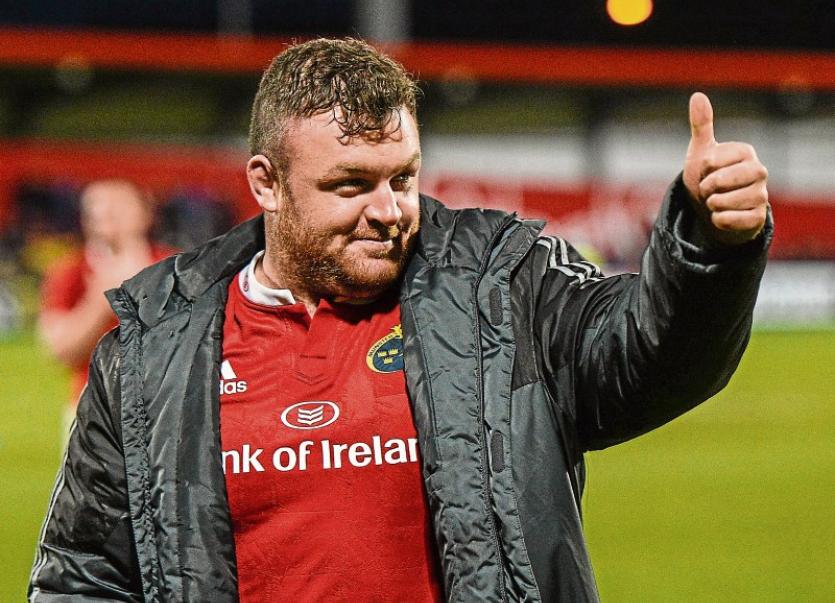 PROP Dave Kilcoyne looks set to give Munster a fitness boost ahead of Sunday’s mammoth Champions Cup opener away to Racing 92 although centre Keith Earls looks set to miss the Pool 1 opener.

Munster reported this week that both prop Kilcoyne and centre Earls were following return to play protocols this week for concussions sustained in the Guinness Pro12 defeat to Leinster on Saturday.

Kilcoyne’s availability for the clash with the French Top 14 champions comes as a massive boost to Munster after fellow loosehead prop James Cronin was handed a four-week ban on Wednesday for an alleged stamp on Leinster scrum-half Jamison Gibson-Park during the course of last weekend’s interprovincial clash.

Munster Director of Rugby Rassie Erasmus said at a press briefing in UL this Thursday: “Earlsie (Keith Earls) would be very doubtful for Sunday due to concussion. We will give him some time, but I think there is a very good chance that he won’t be available.

“Dave Kilcoyne is fine. He has come through the steps of the concussion return to play. Otherwise, there are not really any new injury worries apart from that.”

Erasmus also indicated that Munster are unlikely to appeal against the four week suspension handed down to prop Cronin following the disciplinary committee hearing in Glasgow on Wednesday. As it stands Cronin is free to play again on Monday, November 7.

Erasmus said: “To be honest, I wasn’t part of the process (hearing) yesterday, obviously we had training. I went through the incident with James one on one.

“I know he didn’t do that on purpose. He is not that kind of person.

“It wasn’t a good reflection, so from my side as a coach, or Director of Rugby, I haven’t really seen the documents around the whole thing, but it would make sense for me to rather just leave it.”