Munster back in Limerick to face Edinburgh 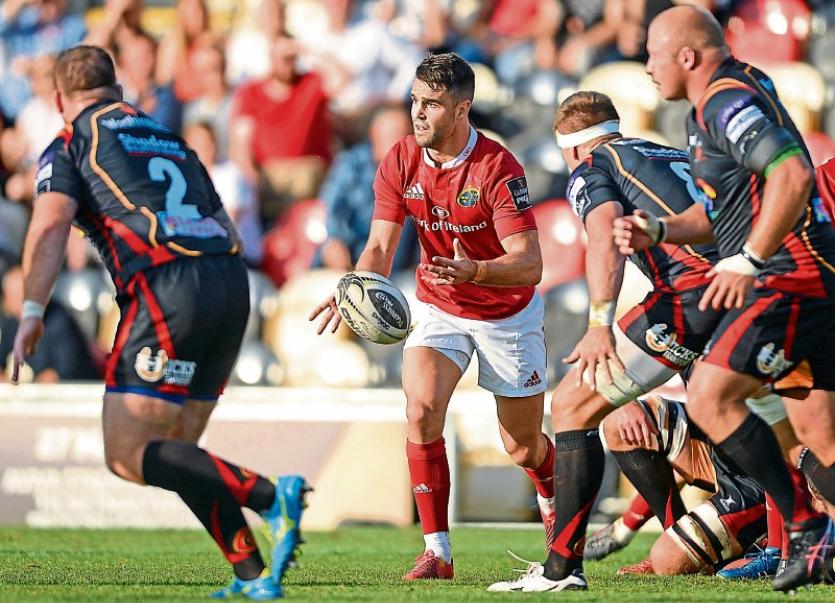 MUNSTER play their first game of the season in Limerick on Saturday when Edinburgh visit Thomond Park for a crucial Guinness PRO12 clash, 3pm.

Munster sit in sixth place in the table with two wins from their opening three Pro12 fixtures. Just three sides remain unbeaten in the league so far.

Saturday's opponents Edinburgh have won just one of their three games.

Prop John Ryan turned in a Man of the Match display on Saturday when Munster edged Dragons 20-16 at Rodney Parade.

Ryan said Munster needed to build on their second away win in Wales this season.

“We really need to kick on from here. Rodney Parade is an incredibly tough place to come. To get the result there, we are all delighted,” John Ryan said.

“Last week after we lost to Cardiff, the key word was 'clinical'. When we went into the '22 last week  we shipped away a lot of ball, we conceded a lot of penalties.

“That was the focus going into this weekend. Hold onto the ball and take advantage when we got into their '22. For Jean Kleyn to to get that try in the first half when we got in there, was a big boost for the team.

“It was a very tough game, same as last season. It went down to the wire.

“The way we played in the first half to go in drawing, we were very disappointed. Credit the Dragons they put it up to us for the whole 80 minutes.

“Our ball rention was better in the second half. We managed to hold onto the ball. Up front won the game for us today.”

Munster were forced to make a late change to their starting line-up on Saturday as Ireland star Keith Earls was withdrawn from the squad  after reporting a tight hamstring.

Saturday's clash with Edinburgh at Thomond Park will be televised live on Sky Sports.

Meanwhile, Limerick clubs will be hoping for netter fortunes when the second round of Ulster Bank League fixtures take place on Saturday.

UL-Bohs were the only local side to record a win on the opening day of the season.

In Division 1A, Young Munster will look to bounce back from their 36-35 home defeat to Old Belvedere when travelling to Cork to face Cork Con. Garryowen will also be looking to record their first win away to Belvedere.

In Division 1B, UL-Bohs will look to make it two wins on the bounce when hosting Ballynahinch on the 4G pitch at UL, while Marcus Horan's  Shannon travel to Buccaneers.

In 2B, promoted Old Crescent travel to MU Barnhall, while Thomond host Bective Rangers at Fitzgerald Park. In 2C, Bruff entertain Midleton at Kilballyowen Park. All games kick-off at 2.30pm.