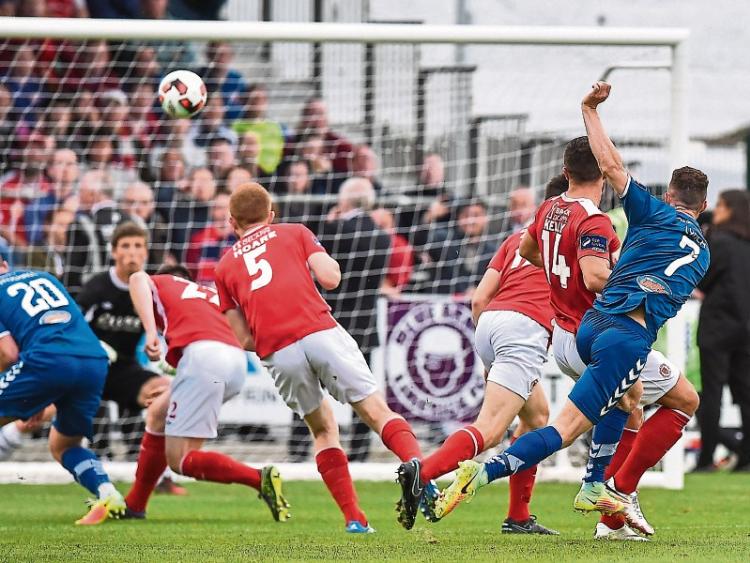 LIMERICK FC’s hopes of claiming a first EA Sports Cup title in 14 years were dashed by Premier Division St Patrick’s Athletic on a 4-1 scoreline in an entertaining final played at a packed Markets Field on Saturday night.

Limerick, looking to add Cup success to the promotion to the Premier Division achieved last month, looked well-placed to take another Premier Division scalp in the competition when leading 1-0 at half-time through a Lee-J Lynch thunderbolt.

First Division champions Limerick have a couple of excellent chances to add to their lead in the third quarter, but paid a heavy price for failing to convert any of them.

Once St Pat’s equalised after 65 minutes through Christy Fagan, the visitors took a firm grip on the showpiece final and Man of the Match Conan Byrne fired the Dubliners into a 2-1 lead on 84 minutes.

As Limerick chased the game late on, the Blues were hit two two breakaway goals from Jamie McGrath and Graham Kelly in added time as the Saints retained the EA Sports Cup.

St Pat’s were deserving winners, even if the Inchicore side was flattered by the margin of their victory.

Limerick opened the better, playing at a high tempo which Pat’s seemed to struggle to come to terms with. The Blues also dominated possession during that opening quarter, using the side expanses of the well manicured Markets Field playing surface to good effect.

Aaron Greene, Chris Mulhall and Paul O'Conor combine well on 11 minutes, but the latter driove his effort wide when well placed just outside the box. A minute later Blues captain Shane Duggan Duggan saw his well struck effort saved, with the in-rushing Chris Mulhall close to getting a toe on it.

Just as St Pat’s appeared to be settling for the first time in the game with Blues ‘keeper Freddy Hall forced into a smart save to deny Christy Fagan, Limerick took the lead much to the delight of the vocal home support.

Home town midfielder Lee-J Lynch cut in from the left before unleashing a screamer high into the roof of the net on 18 minutes from 25 yards out. The Markets Field erupted in delight.

However, St Pat’s weren’t long in responding with Blues supporters relieved to see Billy Dennehy’s header collide off the upright before sliding wide.

Unsurprisingly, the pace of the game slowed somewhat as half-time neared with defences holding sway. Limerick deservedly held their 1-0 lead until the break.

However, the home side came close to surrendering their advantage shortly after half-time when the Dubliners were awarded a free-kick on the edge of the Blues penalty area.

Thankfully, from a home point of view, Blues ‘keeper Hall got down smartly to deny Dennehy from his well struck free-kick.

The see-saw nature of the game continued in the 51st minute when the Blues could and should have doubled their lead after Chris Mulhall was played in. However, the advancing Conor O’Malley deflected the striker’s effort on goal out for a corner which came to nothing.

Pats again came close to equalising on the 56th minute, but Conan Byrne sliced the ball badly after it was deflected across the Limerick goal.

Two minutes later Byrne went down in the box under challenge from Limerick defender Robbie Williams. The referee saw it as a dive with Byrne booked.

Limerick came agonisingly close to adding a second goal against the 2015 winners just after the hour mark. Sean Russell hit a pinpoint cross into the penalty area, which was met by Stephen Kenny in the centre, but his header bounced down and over the bar.

The home side were made pay for spurning those chances to increase their lead when Christy Fagan fired home an equaliser from close range following Dennehy’s low cross.

The goal instilled a new sense of confidence in the St Pat’s players who looked more threatening as the half wore on. The visitors certainly enjoyed the greater share of possession as the home side was forced to defend more often.

Blues keeper Freddy Hall rescued his side in the 81st minute with a terrific reflex save with his legs after Fagan’s effort seemed destined to find the net.

However, St Pat’s would simply not be denied and Conan Byrne popped up to fire home the winning goal from close range in the 84th minute.

And the Inchicore side made sure of retaining the Cup when Jamie McGrath produced a deft finish to beat Limerick keeper Hall with just three minutes remaining.