Ivan Morris: How we won the Fred Daly trophy 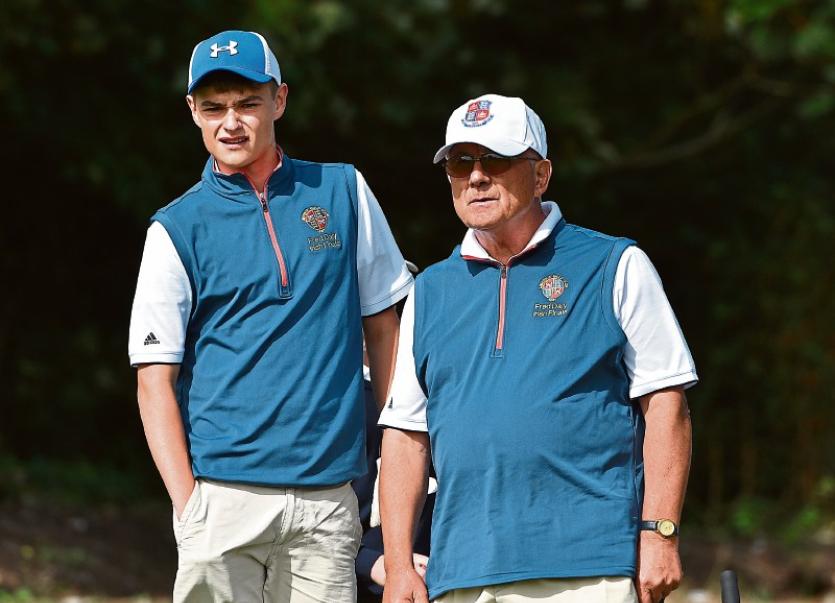 The sports editor of the Limerick Leader usually allows me the freedom to write whatever I want. Not this week because I have been given very specific instructions to tell the inside story on Limerick Golf Club’s U-18 All Ireland Fred Daly triumph.

It was a team I was in charge of so you will have to excuse a certain amount of immodesty. It was a fantastic achievement carried off in the most emphatic way. To win an Irish semi-final and final at any level without conceding an individual match is remarkable. Besides, it was the first time in the 22-year history of the event that any club from Munster has won.

That alarming fact must be worrying for the Munster Branch GUI - casting doubts on their coaching and youth development policies. Saying that these things 'go in cycles' cuts no ice - you have to come up with solutions by trying harder.

In spite of, or because of, my personal pedigree in GUI Cups & Shields, putting a 'senior citizen' in charge of 15-17-year olds is a risky business. Last year's Limerick GC captain, Michael Leahy, took a chance and handed me the reins. He saw it as an opportunity for me to give back to a Club that has been a big part of my life for 55 years.

Limerick GC has walls full of national and provincial pennants. Many players down the years, including me, have given their all to win those cups and shields. Michael and I thought it would be good for club morale and a moment of great pride for me personally to help guide a new generation to achieving similar success. After all, hadn't I often claimed that I knew how to do it?

Having watched our U-18s losing narrowly in the Munster final at East Cork in 2014, I could see potential even if the group was about to lose its star performer, Mark Macgrath. Mark was the first person I spoke to. His insights were invaluable.

Between us we identified Ciaran Vaughan as the next leader of the group. I spent time with Ciaran explaining what being a 'leader' meant. We developed 'chemistry.' A naturally quiet, modest boy, I helped Ciaran to become a 'meaner and tougher' machine on the golf course. It culminated in his fantastic win in the Connacht Boys Championship and a place on the Munster team.

At our first group meeting, I asked the boys why they played golf? When they said that they played because the liked to win - I knew that at least the right attitude was present. The boys seemed to appreciate my straight talking and jumped at the challenge “to beat an old man 35 years past his best.”

At the beginning, the old man beat them all like a drum but it didn't last - nor should it. Momentum is always with youth. Playing rounds of golf with each of these young lads gave me the opportunity to study their strengths and weaknesses; feedback was frank. Valuable friendly matches with Castletroy, Killarney, Lahinch and Tullamore during the winter months were an investment that confirmed commitment as well as ability.

In 2015, we breezed through North Munster and reached the Munster semi-final at Gold Coast before losing to a strong Kinsale side. Kinsale, in turn, lost to a very young Mallow team, which gave me the impetus to call a meeting and lay it on the line what needed to be done if we were to overcome the Mallow obstacle this year. Weekly gym sessions with a fitness trainer, Cathal O'Neill, during which I could see the boys getting stronger before my eyes was the first part of the plan.

Technical coaching with Michael Collins paid dividends too while I concentrated on the psychology of winning and course management issues.

I found a whiteboard and drew a picture of an iceberg. I pointed at the tip and called it 'Success.' The next question was: Using golfing terminology what goes on underneath to make the tip a success? Is it talent, heart, guts, hard work, luck, or what? I went around the room several times prompting suitable words, which I wrote all over the iceberg both above and below the waterline. When hard work was mentioned - I gave that suggestion particular praise and wrote it down half-a-dozen times. Practice - somebody blurted out - 'now we are thrashing,' I said, and I proceeded to write at least a dozen 'practices' here there and everywhere.

Discipline, determination, focus, concentration, dedication, killer instinct, never say die, composure, patience, sacrifice, technique, rhythm and timing, grit, perseverance and so on. Then, a voice said: 'enjoyment' (pause) ENJOYMENT? Enjoyment comes AFTER you have won not before, I said, but it is a feeling that is well worth all the hard work, practice, sacrifice, perseverance and every other word that was mentioned. I told them stories about how Limerick teams, in my day, had won national titles. "If anybody here doesn't care about winning, I won't care about you!" I said.

To my surprise and alarm things did not go well during our early matches this year. We lost (badly) in the Junior Foursomes to Castletroy. We were extremely fortunate to defeat Dromoland in the North Munster area final, only getting through in 'extra time' after our anchor man, Ross Fitzgerald, performed heroics coming back to win from a dormie three position.

By now the boys had pains in their ears from hearing the same old, same old mantras repeated over and over again but I could see them steeling themselves for a 'big fight' when we drew the team we feared, Mallow, in the Munster semi-final.

At this stage, I was in a position to introduce a new player, Sean Enright, who joined the club earlier in the year but had to go through the process of playing his way into contention by performing up to standard in club competitions first. Sean bolstered the team considerably and provided competition for Ciaran Vaughan as 'leader of the pack' - just the spur Ciaran needed. His game went onto a higher level immediately. Competition is good.

To my great relief, all hit top form together at Newcastle West Golf Club on Munster finals day. Mallow were swept aside. Confidence surged through the ranks and although we nearly blew a comfortable lead against Waterford Castle we made it through. There and then, I promised the Munster Branch we would win at Galway. Winning was the only thing on the boys minds. Defeat wasn't contemplated. I made them visualize bringing home the trophy and told them how it would feel. "Your photo will be on the clubhouse wall - FOREVER!"

Our practice rounds went well. The boys liked the course. Our team of caddies played their part too - giving the boys every support. David Barlow, Hugh Kirby, Scott O'Brien, who will all be in the running for places on the team next year, and the two Eoghan O'Neills (Righty and Lefty!) who were unlucky to lose out because the GUI reduced the composition of the teams from seven to five for this year's competition.

On the morning of our semi-final with the holders, Kilkenny, all I said was: It was our goal to be here today. We have earned the right. Don't go home feeling that you could have played better or tried harder. Go for it! No backing off and waiting for something to happen. It's an opportunity of a lifetime, grab it - lo and behold, that's exactly what they did!

They played even better in the final. Ahead in all five matches after the crucial, first four holes they piled on the pressure never taking a backward step against the Connacht champions, Athenry.

I never had a more stress free day as a team captain. Enright's iron shots were like lasers. Vaughan played impeccable fairways and greens golf, Luke O'Brien, calmness personified, provided the winning, third point 'seconds' before Ross Fitzgerald was about to win his match on the 16th. He was told not to bother and was called in.

Morgan Hanley was locked in a tight battle after letting his early lead slip but wasn't looking like a likely loser to me. 4.5-0.5 was the 'real' result in both morning and afternoon.