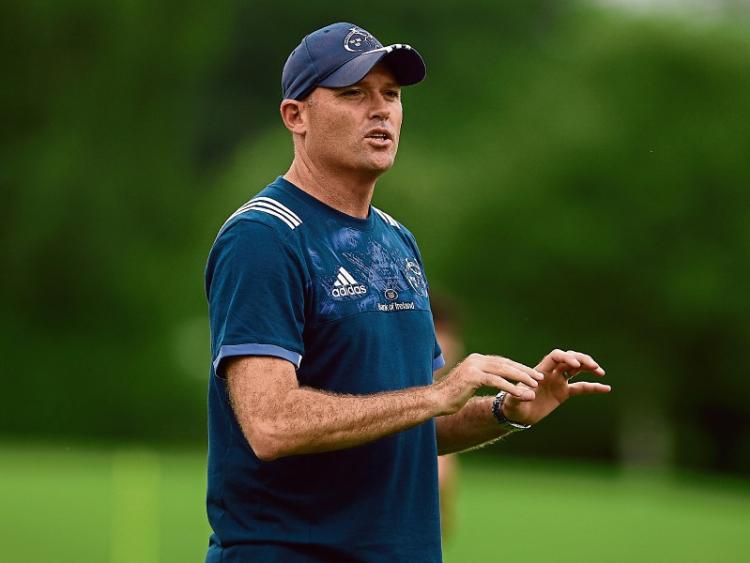 JACQUES Nienaber admits he would never have thought he'd end up in Limerick by July if you asked him his likely whereabouts at the start of 2016.

But that's the ways of professional rugby nowadays.

Nienaber was High Performance Manager with the SARU before joining Munster as defence coach this summer. Nienaber and his family has settled in well to their new life in Monaleen.

“I have settled in good. The community has been fantastic,” Nienaber said.

“My son is playing cricket here. He played back in South Africa and is now playing with Limerick Cricket Club. He played with the senior team the other day.

“He is 13 and his oldest team mate was 52. The people are so accepting and accommodating here.

“From the cricket club straight through to Munster, our neighbors, everyone has been positive and helpful and that has been a huge help to us.

“In January, if you had told me that I would be in Limerick in July, I would not have even thought about that. I’m a physio and my wife is also a physio and we always wanted to work abroad and experience different countries and cultures.

“After I finshed my studies, I went straight into Super Rugby, so I never got to experience any of that. In the beginning of the year, myself and my wife had a chat and she said that we might never go abroad.

“Coaching was always an option and when Allister Coetzee asked me to be part of his team up until the next Rugby World Cup in Japan,  my wife told me that if I took that, we would probably never move as a family.

“My son is 13 and my daughter is 9, so the family is at a stage where it is a good time to move now. So when the Munster opportunity came and Rassie (Erasmus) suggested I come to look at something new, I went for it.

“I am keen  and I have always been to try new things, so I think personally, to develop me as a coach it was a good thing to come here. I am used to Super Rugby, I am used to the way rugby is played there.

“To see what is different, to see if it is different. I am currently learning from the way things have been done here, the ways things are different in South Africa.

“Was it a tough decision? No. It was something we were keen to do a long way back and it is the case that this opportunity came now for us.

“Off the field, I like to have a beer and a laugh, otherwise you would go insane. I think it is important to spend time with family and  friends.

“I trade stocks from time to time, I like that a lot. I play golf, but not enough. Having good craic, I am keen on that. Otherwise you would go mad, but economics, finance  are my interests.”

Nienaber, who has held roles in physiotherapy and strength and conditioning with Currie Cup and Super Rugby sides Cheetahs and Cats,  admits that the first time he looked at Munster from an analytical point of view was when he was interviewed for his  new role.

“They gave me a laptop and asked me to analyse a couple of games. I think it was the Leinster game last season. I went through that game and they asked me questions, but other than that, I think that a blank canvas is the easiest way to go into anything. Because, to be critical, I would need to know the systems and the policies and I didn’t.

“ I come with a set fresh of ideas, judging the players on what I see on the training fields and in the matches.

“The methodology I use to coach a player is different across all teams and nationalities. Everyone has different ways of learning and that is the professional advancement I am looking for here.

“To get the message across that I need to get across. I know what buttons to press for South African players, but I am not sure how to do it here. That is the biggest challenge for me here.

“People will ask, what is your defensive philosophy and I will say the biggest issue is getting your idea and tactics you want to get across, across to players who need to have a certain skill set for that tactic.

“To find a way to get that skill set, if it is not at the required level, or if it is at a level above what I am used to, how can I use that to advance the system I need to use.”

Nienaber was impressed with the resilience the Munster players showed in securing their place in next season's European Champions Cup with a good run at the end of the season.

“The one thing I will say that has impressed me, and I said it to the players last week, is that there is a refusal to be defeated.

“If you saw what the players did in the last couple of weeks of last season and where they were and where they ended up to, that is a characteristic that is huge.

“If you make a tackle, it has to be unbelievably personal. That is where your attitude has to come out. I am excited to work with players who have got that.

“Even in the training sessions, I can things like that. You will only see for 100% in games, but already you can see, as a coach, little glimpses of that ‘never give up’ attitude.”