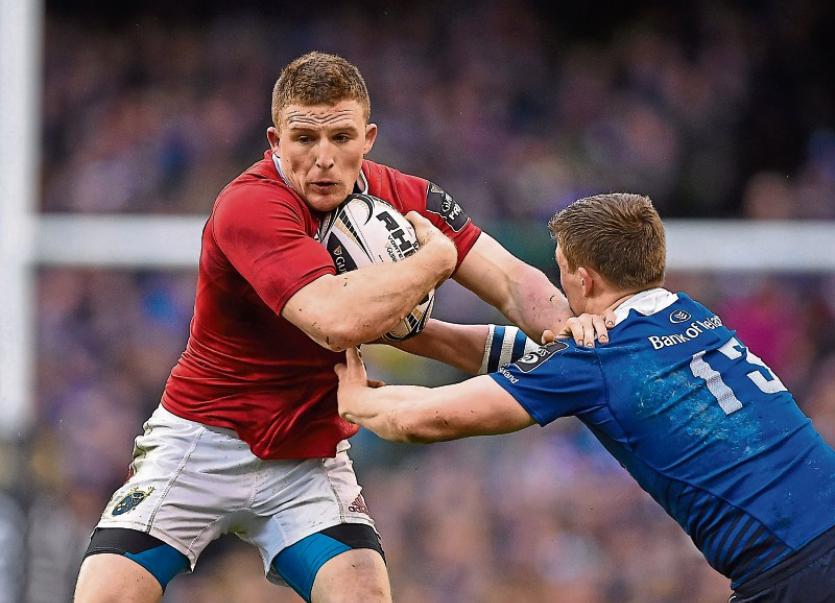 MUNSTER’S in-form winger Andrew Conway is hoping their supporters can play a key role in helping the province tie down Champions Cup qualification at Thomond Park on Saturday.

Sixth-placed Munster are guaranteed to be playing top flight European club rugby next season if they can take two points from their crunch Guinness Pro12 clash with Scarlets at Thomond Park, 3pm.

Andrew Conway said: “It (big support) makes a massive difference. I was just saying, as much as you want to create your own atmosphere, it is easier when an atmosphere is created for you.

“It is is easier when you look up and see your family there as well as thousands and thousands of Munster fans there shouting for you.

“You see a packed out venue, it makes it easier for you. You get an extra lift from that. If  you are on the ground and you are wrecked, especially for forwards, they can hear noise, they can hear people shouting and singing. You get up quicker., that is just how it is.

“As much as you want to do that yourself (get up quicker) the crowd does help you and you do react quicker. It was great to play in. I have not played in front of a packed Munster crowd in a long time.

“It was good to play in front of. Hopefully we can get a good crowd again this weekend too. We need everything we can when facing into a team like the Scarlets.

“Scarlets are a brilliant team. If you watch them consistently, they can score tries from everywhere. They have got some of the best Welsh backs in the game.

“In my opinion Liam Williams is one of the best players in Europe at the moment. Scott Williams make a massive impression when he is in the game.

“They have a really good backrow who are all over your ball. We are going to have to be on our ‘A’ game to compete with them.

“We are looking forward to it though. Obviously we had a good win on Friday. There are a few defensive things that we need to touch up on. It is going to be a good game.”