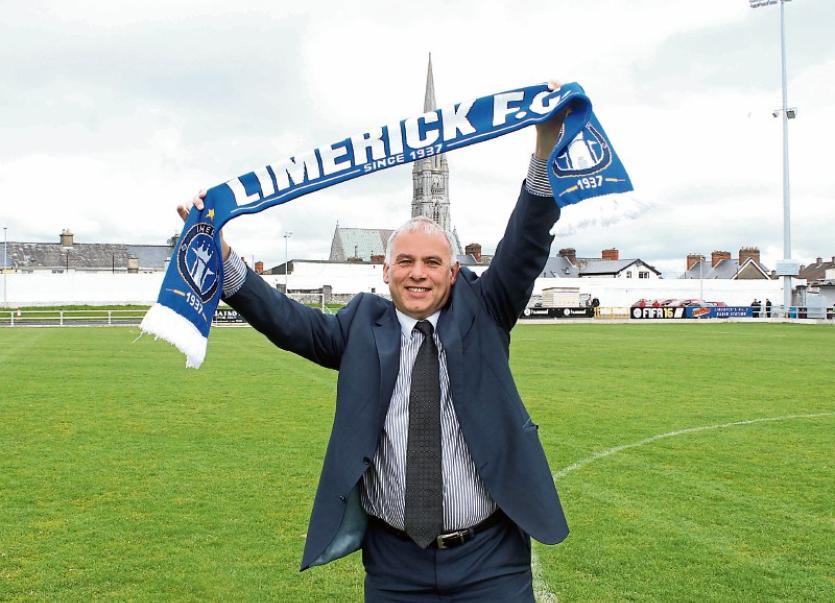 SPORTING icon Tony Ward, an FAI Cup winner with Limerick Utd in 1982, is getting behind the club’s innovative fundraising initiative.

Ward has been made Honorary President of Limerick FC, and is ‘chuffed’ to be part of the ‘Backing the Blues’ campaign.

As well as winning an FAI Cup with Limerick 34 years ago, Ward played against Spurs in Thomond Park the day Glen Hoddle scored four goals and played for the Blues against Southampton in the Uefa Cup when Kevin Keegan gave him an England soccer jersey in exchange for an Irish rugby one.

Tony Ward said: “Pat O’Sullivan approached me to get involved in this initiative around November or December of last year. We met with James (Ring) from the Limerick Chamber.

“He bounced the idea off me and gave me time to think about it.

“It is a just a fabulous opportunity to be back involved in Limerick sport. I love what is going on with the football club.

“I was at Limerick’s First Division game with UCD last Friday night. They are playing a lovely brand of football.

“They are lovely to watch and I love being associated with that and with Limerick sport.

“It is turning back the clock for me and an excuse for me to come down much more often and I love that.

“It is a very personal thing, so I was delighted when Pat (Limerick FC Chairman Pat O’Sullivan) and James approached me.

“I am involved in an Honorary President’s role.

“Whatever Pat requires me to do I am prepared to do it. It is great timing as the rugby season is drawing to an end and the football season in Ireland is now a summer season.

“It’s perfect. I am absolutely chuffed. I am just delighted to be involved again.

“The positivity I am hearing in relation to the club – and I am hearing it left, right and centre – is fantastic. I can only see it going one way.”

O’Sullivan said: ”I have been funding Limerick. I cannot continue to do it. I wanted to bring corporate Limerick to the table.

“In order to bring corporate Limerick to the table, we found a vehicle through the community work we do. That is the vehicle and the pathway.

“We then felt that it would be nice if we could fine one sporting link with Limerick that would give that little bit of extra credibility to it.

“James Ring, the chief executive of Limerick Chamber, suggested Tony Ward and hence he is here.

“When we want to sell something to corporate Limerick, having someone like Tony ward at the top adds that extra layer of credibility.

“It is not just soccer. This is about Limerick and it is across other sports. If we need Tony to come to any functions where we are promoting the club or Limerick is promoting itself through sport that is another example which shouldn’t be forgotten.

“The supporters are there. Now we need corporate Limerick and political Limerick to support us. They are a net beneficiary of it.”

Ward recalled: ”Three different people, Dave Mahedy, Harry Gibson-Steele, who worked in the sports shop we had in Limerick, and most of all when he came to Limerick, Eoin Hand encouraged me to join Limerick.

“It was a golden era during those few years in terms of trophies won. It was such a great set-up, well organsied. You had Pat Grace at the top, Eoin in terms of pure professionalism. It was a great period.

“Eoin asked me to play whenever I was available. It was difficult because the rugby and soccer seasons ran in paralell. I was involved with the Munster and Ireland.

"The year we won the FAI Cup, I think I played in every game bar one in that Cup run because Garryowen had been knocked out of the Cup early. It was a case of Eoin asked me if and when I was available would I make myself free to play.

“There was an incredibly bond and sense of comaraderie in the group. They were so gracious to me at that time.”