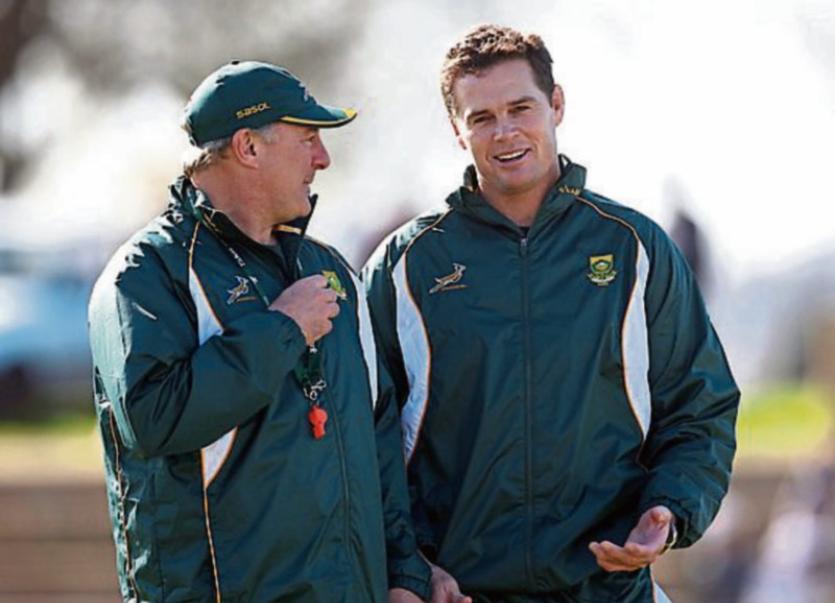 THE fact Johan ‘Rassie’ Erasmus has signed on for a substantial three year term as Munster’s first Director of Rugby indicates the South African’s belief that he can turn the province’s fortunes round.

Three years is a big commitment for Erasmus, who was, by all accounts unfortunate not to be appointed South African head coach which eventually went to Allister Coetzee to make.

During his time in South Africa, ‘Rassie’ has enjoyed a proven track record in head coaching, developing young players and putting highly-functioning structures in place.

The 43-year-old won 36 caps for the Springboks and is currently General Manager High Performance of South African rugby, a position he has held since 2012.

Matthew Pearce, a sports presenter with SuperSport  TV  in South Africa, believes Munster have recruited well in bringing Erasmus to the province.

“Rassie (Erasmus) is a big loss to South African rugby. That is the general consensus going around since the news broke.

“He has done a great job as the head of the Rugby Department at South African Rugby.

“He has been responsible for overseeing the development of playing style in South Africa but across all age groups, starting with schools teams, up through the U-20s, the 7’s, ladies, right through to the Springboks.

“He has had a team of very specialised coaches working within that unit, which includes things like the breakdown. We had the Richie Gray, the Scotsman, as part of the breakdown team.

“We have Pieter de Villiers, who is the ex-French international prop helping out with scrummaging.

“There is a specialist kicking coach and so on and they form part of this unit which has gone under the curatorship of Rassie over the past few years.

“He has a deeper history than that from a coaching side. He was Director of Rugby at the Stormers for a period of time. He was widely touted as a possible replacement for the South African head coach.

“The most important thing to say about him and this will be of enormous comfort to Munster fans certainly as they look forward to his arrival is that Nick Mallett, a colleague of mine, and a past coach of the Springboks and Italy, he coaches Rassie when he was coach to South Africa in the late 1990s. He has said unequivocally that, as a player, he was the finest rugby mind he ever coached.

“He was never lacking in confidence to come forward with ideas when playing under Nick with the Springboks and was always willing to innovate and come up with new strategies.

“There are few better compliments than that.

“My experience of having worked as a broadcaster and journalist around the various structures and teams that Rassie has worked with is that he tends to favour a backroom presence.

In a playing career that spanned eight years, Erasmus lined out for the Free State Cheetahs and the Golden Lions in the Currie Cup, and for the Cats and the Stormers in the Super 12.

He served as captain of the Cats, leading them to the 2000 Super 12 semi-finals, and also captained the Springboks in 1999.

After retirement, Erasmus moved into coaching and guided the Cheetahs to Currie Cup glory in 2005 - the Bloemfontein-based team's first Currie Cup title since 1976.

The following year, his Cheetahs side shared the Currie Cup trophy with the Blue Bulls and he became the first ever coach of the Cheetahs Super Rugby franchise when they were accepted into the Super 14 that year.

In 2007, the Eastern Cape native served as technical adviser for the Springboks during their Rugby World Cup winning campaign in France before becoming Head Coach of the Stormers and Director of Coaching at Western Province.

Erasmus served a second term as technical adviser to the Springboks during the 2011 Rugby World Cup in New Zealand before assuming the General Manager High Performance role.

It is also understood that Erasmus could opt to bring in Jacques Nienaber, the well-regarded defence coach who has worked with Western Province, the Stormers and the Springboks.

Erasmus’ fellow South African CJ Stander had some interesting thoughts on what the new Director of Rugby might bring to the province prior to his appointment.

"I know Johan (Erasmus), yeah, I worked with him a few times. He's a good guy, he has played for the Springboks.

”He is a good coach, he will bring something different whatever happens.

"He will bring a type of game that is a bit more open. He has always got something up his sleeve, so it will be interesting to see what happens.

“He coached the Cheetahs when I was younger and there’s always attention to detail and he always has something against every team that he plays against.

”He’s a guy who knows that a team starts at the grassroots so that’s good, in Munster anyway you have to know where you came from so that’s something we’ll enjoy.

So how will Munster utilise what Erasmus has to offer so as to ensure the quickest possible turnaround in the province’s fortunes.

Munster CEO Garrett Fitzgerald said of the new Director of Rugby role: "For us, we want the director of rugby to be an on-field person, a tracksuit person and ultimately, as the statement says, they're responsible for the performance on the field.

“That is the way we want the director of rugby and that is from a lot of research, talking to a lot of people and that's the role we see for this person.

“You could see straight away he’s a good management ability, all the work he’s done as a player, as a leader on the field as a coach and what he achieved with the Cheetahs, especially from starting off (as a Super Rugby franchise).”