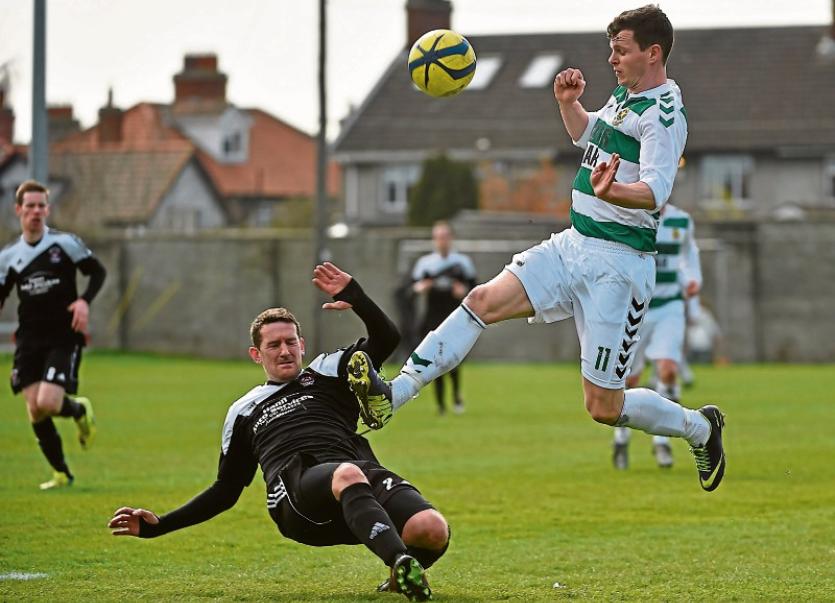 JANESBORO’S dreams of winning their first FAI Junior Cup were dashed in Dublin on Sunday afternoon when they crashed out of the competition at the semi final stage with a 4-1 defeat to a very good Sheriff YC side.

Concession of a couple of soft goals in the first half saw the Limerick side trail 2-1 at the break and on the turnover they were unable to break down a solid home defence.

Right from the kick off the home side showed the danger they posed with Goalkeeper Stephen Walsh forced to knock Mark Higgins inswinging cross out for a corner kick.

Minutes later John Boyle was called on to block Darren Dunne and from the rebound the Irish star blasted over the top.

Janesboro had a great chance to level the game when strong play by Clarke created an opening for the inrunning Mike Hogan but he tried to beat the keeper at the front post without success.

'Boro were piling on the pressure and a good ball across goal by John Tierney picked out Clarke, five yards out, but superb defence from the Murphy's Lee and Paul smothered the chance.

Just before the half time whistle 'Clarke knocked a free kick against the defensive wall and when the ball rebounded him, he lifted the ball with one touch and let fly with a superb volley that scraped the crossbar.

The home side started the second half best and but for an excellent save by Walsh would have conceded after Dunne broke clear of the defence.

Midway through the half Sheriff killed off the tie when Mark Higgins stuck out a leg to send John Rock's mishit shot to the net.

Try as they might ' Boro could not break through although with five minutes remaining Clarke had a header cleared off the line.

That was as good as it got for Boro and with time running out substitute Thomas Dunne beat the offside trap before putting the ball across goal for Rock to seal the win.

While defeat was their lot a very young Janesboro side will have learned from the game and no doubt will be back challenging again in the coming seasons.

While obviously disappointed with the result the 'Boro management team will need to get the players back on track almost immediately as they have a huge number of big games coming thick and fast with plenty of silverware still up for grabs.

Congrats to @Sheriff_YC on making it to the #FAIJuniorCup final here on May 14th! #RoadToAviva