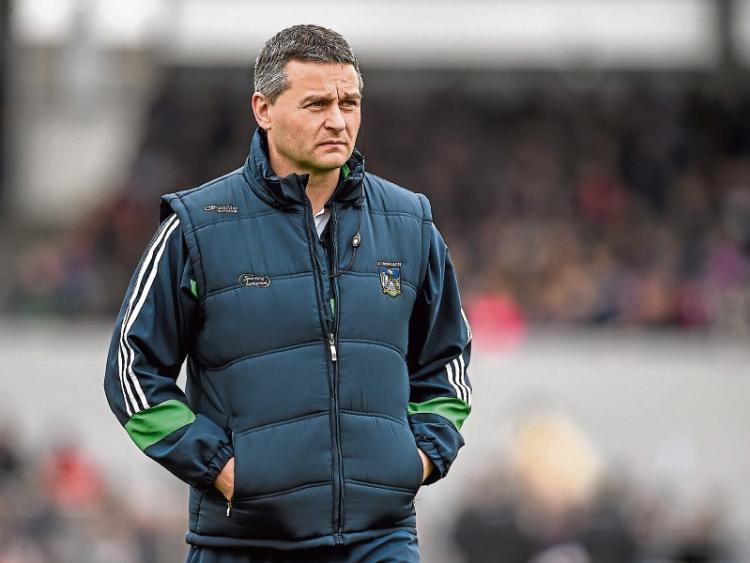 “THE pressure is on,” accepts TJ Ryan ahead of Saturday’s Allianz Hurling League quarter final.

“We wanted to get promoted down in Ennis and we didn’t perform like we wanted and now we have to try and make up for that,” said the Limerick hurling manager ahead of the April 2 game against Dublin in Parnell Park.

“It’s a national competition and we have a chance to get into the last four so it’s a huge game for us and one we very much want to win.”

Victory in Donnycarney, in a game not televised live, will secure Limerick an April 17 semi final against Wexford or Waterford.

However, this quarter final fixture has not been kind to Limerick since the introduction of quarter finals two years ago. In 2014 the fall-out from a routine 1-20 to 1-12 win for Galway in the Gaelic Grounds hastened the exit of joint-manager Donal O’Grady, while this time last year a 1-25 to 0-16 win for Dublin in Croke Park also caused much friction in the aftermath.

Conscious of recent failures to regroup after promotion heartbreak, TJ Ryan brought his side to Salthill last Saturday to play a challenge game against Galway, who play Cork in a relegation tie this weekend.

”The difference this year is that we had two weeks before this quarter final and we will go to Dublin with two weeks good work. We had a good workout in Galway and we played it over three thirds to give game time to everyone,” explained Ryan.

Among those to see action were the returning members of Na Piarsaigh’s All Ireland winning club side.

”They are back in the set-up and it’s a boost to everyone and they certainly strengthen the squad,” said Ryan.

While Limerick travel to Parnell Park on the back of losing the winner-takes-all promotion clash with Clare, Dublin secured three wins from five starts in the top flight. They beat Galway in Parnell Park, Cork in Croke Park and Waterford down in Walsh Park, while losing to Tipperary and Kilkenny.

This form-line has seen Ger Cunningham’s home side installed as 8/13 favourites to advance to the last four.

”It’s a huge game – it’s the quarter final of a national competition and it’s one that we want to go and win,” stressed Ryan.

”Dublin are going well with some good wins in Division 1A and it’s an away fixture for us and they have a pretty decent record in Parnell Park,” said Ryan.

Limerick are bidding to restore confidence after defeat to Clare confirmed 2017 will be a seventh successive season in the second tier of the league with opposition to come from Wexford, Offaly two from Kerry/Laois/Westmeath and either Cork or Galway.

After analysing the loss to Clare, Ryan was left to rue the red card for Barry Nash.

”We were slow to start and were five points down and then 19-minutes later it was down to one point and we were hurling well and then came the sending-off. We were chasing our tail in the second half  the sending-off had a big bearing,” outlined Ryan.

Ahead of the Donnycarney quarter final, Limerick manager TJ Ryan and his backroom team of Davy Clarke, Don Flynn, Joe O’Connor and Dinny Cahill look certain to make changes ahead of the team announcement on Friday night at 9pm.

Tom Condon is a doubt with a leg injury but James Ryan has recovered from the injury that forced him to be substituted in Ennis and Barry Nash will be available as his sending-off was for two yellow card offences.

Involved in a match-day squad for the first time in 2016 will be some the Na Piarsaigh nine.

While Limerick used 28 different players in the five group games in the league, none of the Na Piarsaigh contingent have seen competitive action in green this year.

However, only two of the Na Piarsaigh side – Shane Dowling and Kevin Downes – have been regulars in Limerick championships teams in recent seasons. David Breen is another established Limerick senior player but he opted out of the inter-county scene for 2016 due to work pressures.

Ronan Lynch, Mike Casey, David Dempsey and Will O’Donoghue are all in their first season at senior inter-county level after receiving call-ups on the back of last September’s All Ireland U-21 win. Already this season 10 members of the U-21 winning panel have seen senior league action, while Sean Finn and Colin Ryan have both been ruled out for the remainder of the season through injury.

Cathall King, Adrian Breen and Alan Dempsey have been in-and-out of the Limerick senior set-up in recent seasons without nailing down a starting role.

While some supporters have spoke of a potential call-up for Na Piarsaigh’s Peter Casey, the corner forward is doing his Leaving Certificate and won’t be part of the senior plans. This Monday Casey was joint-captain as Ardscoil Ris lost out by two points to St Kierans College in the All Ireland Croke Cup final in Thurles.

Limerick are bidding to reach the last four of the league for the first time since 2006. That quarter final win was over Waterford – TJ Ryan was full back on that occasion and Seamus Hickey remains the only player still involved. Limerick progressed to beat Clare after extra time in the semi final before a final defeat to Kilkenny.