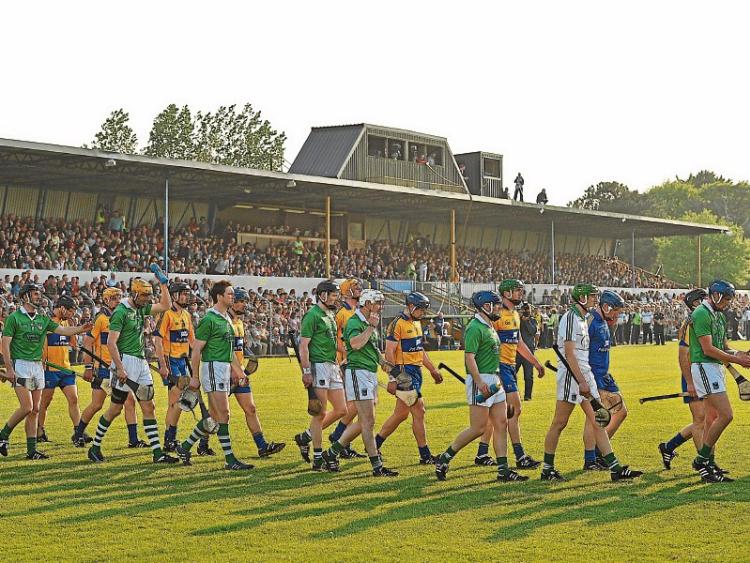 ITS the finale that most predicted – Limerick v Clare in a winner-takes-all promotion clash in the final round of Division 1B of the Allianz Hurling League.

Davy Fitzgerald’s Clare are seeking an immediate return to the top flight while TJ Ryan’s side are six long seasons outside of the league elite after relegation under Justin McCarthy in 2010.

From the outset of this season Limerick manager has made no secret that promotion was a major goal for 2016 – especially given championship isn’t until June 19.

“It’s a huge game for Limerick hurling and we are in the position that we wanted to be in with four wins,” explained Ryan.

“We probably would have been expected from the outset to win the four games that brought a bit of pressure in itself but at the same time that’s parked now and next week is a huge game for us.”

The Limerick manager is hoping that a historic St Patricks Day All Ireland club title for Na Piarsaigh can be an ideal boost ahead of the Shannonside derby.

“It’s all roads to Ennis next week and that’s a big game for us and for Limerick. We are where we wanted to be with four wins but next week is crucial.”

“History shows us that in certain games over the last two or three years we have let our standards drop a bit and we made slip-ups that were costly but this time round its critical.”

Ryan added: “It counts for nothing right now because next week is the big game”.

“It’s a big game with a huge prize,” he said with a sense of anticipation.

“Myself and the team made no secret of the fact that we wanted to go after Division 1B and it was the target in a major way. We are in the final now and in fairness to Clare they are in a similar position – it’s an early season final and one we wanted to be in.”

Indeed it’s the second ‘final’ of the year between Limerick and Clare.

Back in late January the sides met in the final round of the new-look Munster Senior Hurling League and that game also turned out to be the final.

“It’s only out the road and there will probably be a big crowd with a bit of an atmosphere and we are looking forward to it,” said TJ Ryan.

“This is a big week for us but I’m glad we have done this and we have to go after this. It was the early season target so bring it on now.”

Were anyone in doubt as to the importance of Sunday’s tie, Limerick GAA secretary Mike O’Riordan has estimated it’s worth €100,000 to the winner.

"If you take into consideration gate receipts for home matches you could draw 10,000 for games against Cork, Tipperary and Kilkenny, whereas you might have just 1,500 at a Division 1B game,” explained the secretary.

"Then there is the money from advertising space around the ground, greater sponsorship share, programme sales and everything that can be generated from bigger crowds," he said.

Ahead of Sunday there was a boost for the Limerick hurlers with confirmation that dueal player Gearoid Hegarty has thrown in his lot with the hurlers for the remainder of 2016.

The decision of the St Patricks' man to end his dual quest comes a big blow to the footballers relegation battle in Division 3.

After two years on the county football panel, Hegarty was called into the hurling panel on the back of last September’s All Ireland U-21 success but only made his senior inter-county hurling debut in Saturday’s easy 32-point win over Laois.

He had hoped to combine hurling and football for the season but a hectic schedule in January and February has seen the towering 22 year old reconsider.

Already this season with UL he reached a Fitzgibbon Cup final and also helped them into the semi finals of the Sigerson Cup.