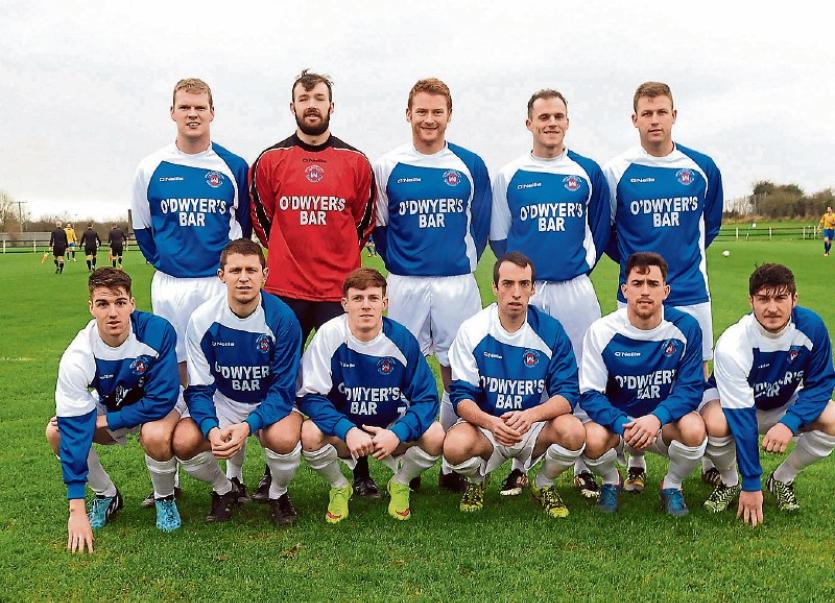 Limerick's hopes of winning the Oscar Traynor Trophy were dashed at the quarter final stage on Sunday afternoon when a hard working Clare side came out tops on a 2-1 scoreline.

The visitors coped better with the elements and soaked up a lot of pressure from Limerick before taking charge in the second half.

A swirling wind, that made it nigh on impossible to pick out passes, was a spoiler from the start but it was no excuse as Limerick had enough chances to have had the game wrapped up by the time Clare took the lead.

The visitors defence marshalled by former Limerick FC Captain Pat Purcell were dominant in the aerial duels and goalkeeper Barry Ryan had a superb outing.

Further up field Darragh Corry and Eoghan Hayes proved constant thorns for the home side.

While the result did not go Limerick's way they did create enough chances to win the tie.

A soft penalty and a rather fortuitous second goal knocked Limerick back on their tracks and Limerick's reply came too late to have the desired effect.

Jonathan Hannafin, Danny O'Neill, Pat Mullins and John Tierney were prominent throughout for the homesters.

Limerick started well and after just two minutes forced a couple of corners. Eoin Hanrahan's inswinger was knocked to safety and from the other side Mike O'Gorman's inch perfect delivery was saved on the line by Clare goalkeeper Barry Ryan.

Good approach work by Shane Clarke and John Tierney teed up the chance for Paudie Quinn but Darragh Corry, tracking back, made a vital interception.

Clare threatened again when Corry let fly with a shot from outside the box that was narrowly off target.

Midway through the half, Shane Clarke won the ball midway inside the Clare half. His incisive through ball picked out Quinn who succeeded in rounding the keeper but his shot on a empty goal was blocked on the line by a last ditch sliding tackle from Conor Mullen.

On 25 minutes from a corner Corry headed goalward. The ball fell to Daryl Eade two yards from goal but his swivel and shot was blocked by the perfectly positioned Gary Neville.

A stray pass across midfield saw Eoghan Hayes gather and race through but a posse of Limerick defenders got back to keep the game scoreless.

Limerick had another great chance on the half hour mark. Shane Clarke turned his marker well on the right and drilled the ball low across goal. Paudie Quinn's touch beat the keeper but the ball struck the crossbar and from the rebound Michael O'Gorman's vicious volley produced a stunning point blank save from Ryan.

A minute later Danny O'Neill was the provider again for Quinn but again his effort was well saved by the Clare net-minder.

Stephen Kelly was allowed turn unopposed, and look up before unleashing a twenty five yard shot that forced Gary Neville to go full length to turn to safety.

Five minutes from half time Jonathon Hannifin's throw in to Eoin Hanrahan saw the Pike man let fly with his right foot from out near the corner flag with a shot that beat Ryan but struck the crossbar before being cleared to safety.

Shane Clarke went close with a left foot shot that rose narrowly over the top and the last action of the half saw Quinn race onto a Thomas Clarke through ball. He won the challenge with keeper Ryan and knocked the rebound into an empty net. Unfortunately, the referee spotted something, missed by most spectators, and awarded a free out.

Despite playing into the gale force wind for the second half Limerick started best. Limerick had a shout for a penalty was Hannafin was upended and when the ball broke for Mike O'Gorman his effort was saved by Ryan.

Clarke worked the ball in along the end line and placed the ball on a plate for any team mate but there was none to be found to apply the finish.

A sliding tackle from Darren Murphy denied Quinn what you felt he must score and when Connery had a shot blocked on the front post Hanrahan's resulting corner kick was cleared off the line by former Pike winger Daryl Eade.

You felt Limerick would pay for all these misses and so it proved midway through the half when Hayes cut inside Thomas Clarke and was upended in the area. The Clare striker took the spot kick himself and converted in style.

Before Limerick had a chance to regroup they were two goals down. A very rare mistake by Limerick keeper Gary Neville saw a hopeful shot by Joe Collins slip between the keepers legs to put the visitors two ahead.

It was a cruel piece of luck for the net minder who has been the most consistent performer in the League over the last four or five seasons but such are the joys of a goalkeeper.

Limerick had a chance to reduce the deficit when Ryan made a aware mistake dropping Hanrahan's cross but Quinn, although alert to the chance, failed to keep the shot on target.

Limerick went all out in an effort to get back in the tie thereby leaving themselves vulnerable at the back. Neville made a number of saves to keep the deficit at two but Limerick's lone response came from a Shane Clarke free kick at the death.

So, it's back to the drawing board for Limerick, with next year marking the 20th anniversary of their last success in the competition.

Carew Park moved to within a point of leaders Fairview Rangers when they scored a slender win over Moyross on Sunday morning.

Adam Frahill, with his first goal of the season, scored the all important goal after 20 minutes against a Moyross side who again deserved more for their efforts.

Albert Slattery's men will be delighted with the points but less satisfied with the performance. They played second fiddle for large patches of the game and while goalkeeper Jamie Stewart was rarely threatened, the visitors did have enough chances to earn a share of the spoils.

There was plenty of effort on display from both sides but the prevailing swirling wind put paid to any semblance of a flowing game.

Richie Mullins again had a fine outing for the homesters as did the goal scorer Adam Frahill and Gary Griffin.

For Sunday's game Injuries and work commitments had Carew down to the bare bones and should they wish to keep their Title challenge on course they will need to add considerably to their squad.

Moyross will be disappointed to leave the park empty handed.

They had their most likely player in Alex Purcell while Stephen Hannon and Pat McCallig also had fine outings.

Moyross were on top in the early stages and had a couple of half chances down the right.

Pat McCallig drilled a ball across the face of goal that struck Mullins. Jamie Stewart saved the defenders blushes saving on the line.

At the other end Jamie O'Sullivan engineered space in a crowded goalmouth but blasted over from 15 yards.

A snap shot from Purcell forced Stewart low to save minutes before Carew struck the winning goal.

A move down the left was partially cleared by the Moyross defence but Adam Frahill gathered 25 yards from goal before hitting a beauty to the top corner despite the best efforts of keeper Mike O'Donoghue.

Five minutes later Moyross went close to levelling the tie. Mike Guerin tried to poke the ball home from Purcell's cross. Stewart got in a block and from the rebound Shane Guerin blazed a volley inches over the top.

Good play across the pitch by the visitors ended with James McNamara forcing a superb save from Jamie Stewart and the Carew keeper made an even better block to deny the impressive Hannon as he burst through the Carew defence.

The second half was a dour affair which hardly produced a chance of note with neither keeper being unduly tested.