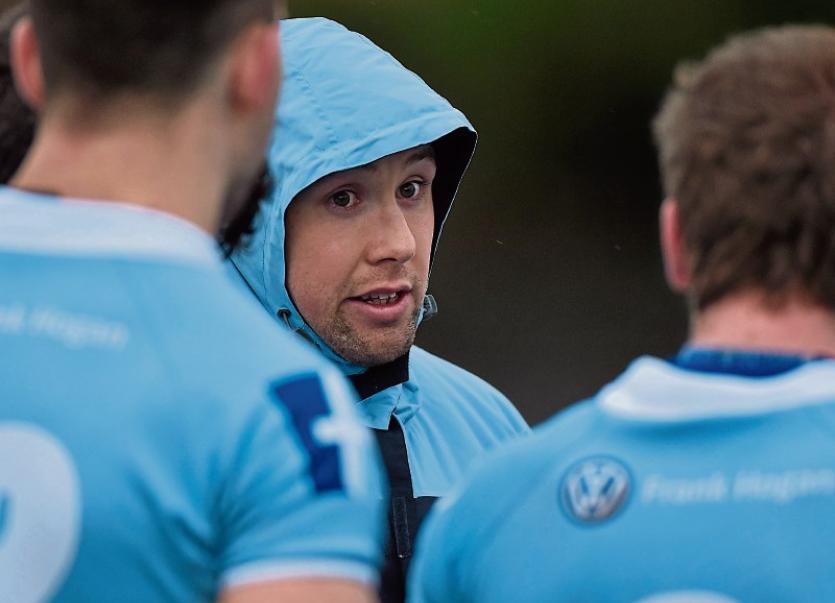 Garryowen head coach Conan Doyle has a word with his charges

GARRYOWEN FC head coach Conan Doyle had reason to celebrate on the double when the birth of his baby daughter was quickly followed up by his side’s gritty Ulster Bank League Division 1A win over UCD.

Doyle’s Garryowen charges sit in third place in the top flight table on the back of their thrilling 27-20 victory over the Dublin students at Dooradoyle.

The ‘Light Blues’ win was secured despite playing 50 minutes of the game with 14 men, following the red carding of prop Andrew Keating.

A delighted Conan Doyle said: ‘Baby Lucy was born yesterday. Both Lucy and my wife Noelle are doing great. We’re thrilled, over the moon.

“As for the rugby, I thought we produced a really good performance in the second half. I thought we were kinda stuck in second gear in the first half.

“Unfortunately, we lost a player to a red card and we seemed to be going through the emotions a bit.

“We realised at half-time that we needed to pick it up or we weren’t going to win the game. We could have been in for a bad beating.

“But the lads really turned it around. It was an excellent performance, and it showed the strength that we have in the squad.

“To be able to survive with seven men in the scrum as well is not easy. Credit to JP Phelan who came on there at tighthead as well as everyone else in the pack.

“After our first group of games (two wins), we were happy enough, but we knew we could get better and we needed to get better, so we really targetted this batch of games to show where we are at and I think we started off slow, but in the second half with 14 men, we did very well.

“The win was a massive step forward for us.”

Garryowen face a trip to Lansdowne on Saturday next in the sixth round of Ulster Bank League fixtures.