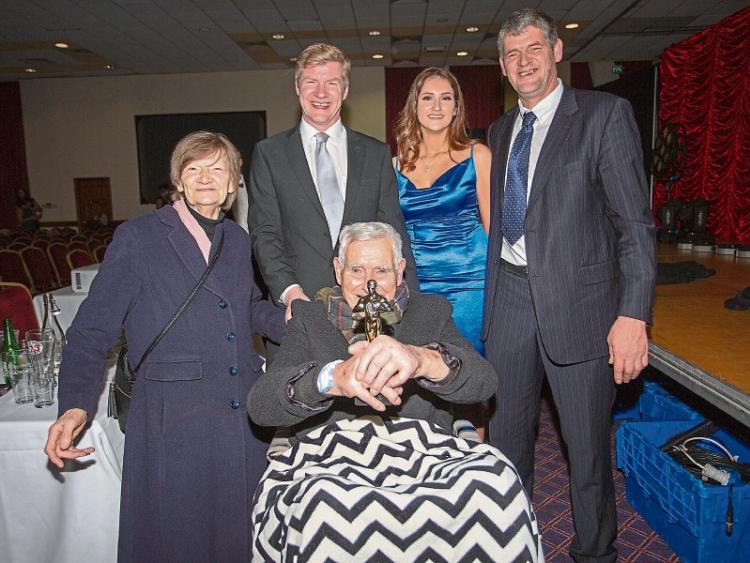 Willie Keane clutching an OsKaR with his wife Patsy, sons John and Mike along with grand daughter Hannah at Ahane GAA’s Night at the OsKaRs | PICTURE: Kieran Ryan-Benson

THE death has been announced of legendary Limerick GAA figure Willlie Keane.

Willie, of Gardenhill, Castleconnell was president and a former chairman of Ahane GAA club. He also served as the club’s county board delegate in the past.

Willie, who attended last month’s Night at the OsKaRs at the Great National South Court Hotel, was a committee member at Ahane GAA Club as well as being a trustee.

He received an East Board Hall of Fame award in 2014 for all his work with the GAA in both Ahane and Limerick.

Willie Keane RIP. All members of the club are invited to stand in the guard of honour. See https://t.co/ZQsbO6VIog for more. #clubify

Willie’s children and grandchildren have or are currently playing with various teams in the club and the whole family still holds very strong connections within the club.

He will be reposing at Meehans Funeral Home, Castleconnell this Tuesday from 4pm to 7pm with removal afterwards to Castleconnell church.

Requiem Mass will take place on Wednesday at 11.30am with burial after in Stradbally cemetery.

There will be a guard of honour for from Meehans funeral home to the church and again on Wednesday from Chapel Hill to the cemetery.

All members invited to stand with the club.