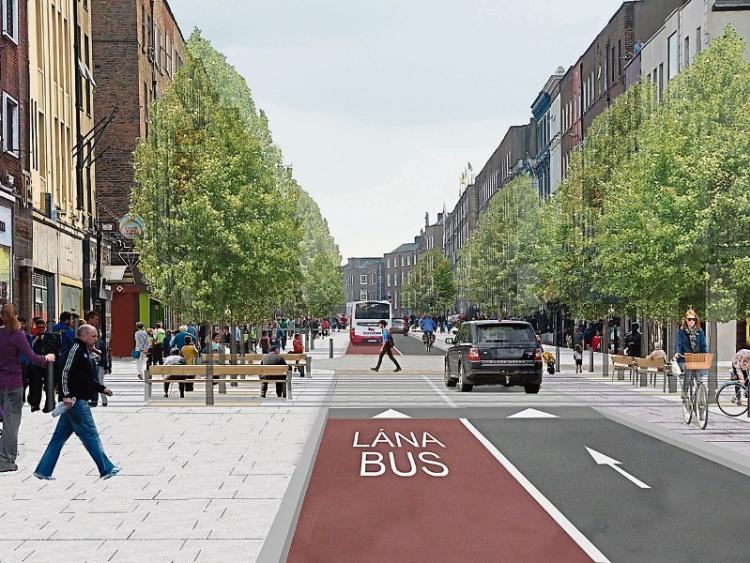 Limerick Chamber is calling for the commencement of the multimillion euro O'Connell Street revitalisation project as a matter of urgency.

It says it's important that key elements of the work can be delivered in time to support businesses that hope to reopen in the coming months if public health restrictions are eased.

Speaking following the Government’s announcement that Level 5 restrictions are to remain in place until at least April 5,  Chamber CEO Dee Ryan said: "The Government is plotting a cautious route to the easing of restrictions and, in time, a gradual reopening of customer facing businesses.  It is essential that we use this prolonged time of supressed movement to make as much progress as we can on the Limerick Urban Centre Revitalisation of O'Connell Street project, which the Chamber believes is essential in support of Limerick business.

Last month Limerick City and County Council confirmed the €9.1m project is not deemed essential under current guidelines and will not be proceeding until the Level 5 restrictions are eased.

“The funding is in place and, for good reason, the commencement of works was suspended in January due to infection levels across the country being out of control. However, with infection numbers significantly reduced, it’s time that this essential project is allowed to push on.  As much progress must be made as possible while businesses are closed so that the impact on their trading when they reopen is at a minimum," said Ms Ryan who noted that works in other urban centres, elsewhere in the country, have been given the go ahead in recent weeks.

"If any urban centre needs this to start now, it’s ours. We have seen the go ahead given by government on major public realm works in Clare.  We need the same urgency in the delivery of the  O’Connell Street works which are critical to stakeholders’ efforts to make improvements in our city centre,” she added.

Limerick Chamber has welcomed the government’s commitment to extend existing business supports to the end of June and confirmation that a National Economic Recovery Plan is at an advanced stage. "However, specifically for Limerick also, we must commence the urgently needed work on O’Connell street as a support for city traders into the future,” said Ms Ryan.

Limerick Chamber has commissioned a report on ‘Future Limerick City’  by Indecon which will be completed in Q2. The initiative is part of the Chamber’s commitment to be a driver for positive change in the city centre and to enable Limerick City to achieve its potential to be the economic engine for the wider Mid-West region.

Regarding the recent discussions on regularising food trucks, Ms Ryan welcomed Limerick City and County Council’s desire to reach a resolution. “I have been in communication with Limerick City and County Council CEO Dr Pat Daly and some Metro Area Councillors on the matter. The local authority is open to looking at this but a motion to amend bye-laws will be needed and this is being explored.

Regarding the recent controversy relating to food and coffee trucks, Ms Ryan welcomed Limerick City and County Council’s desire to reach a resolution.

“I have been in communication with Limerick City and County Council CEO Dr Pat Daly and some Metro Area Councillors on the matter. The local authority is open to looking at this but a motion to amend bye-laws will be needed and this is being explored. I informed the CEO that Limerick Chamber is supportive of measures to facilitate food trucks as they add to the vibrancy of the city. But any accommodation should not negatively impact on operation of other businesses, not least given that their rates and rent are based on location and footfall," she said.