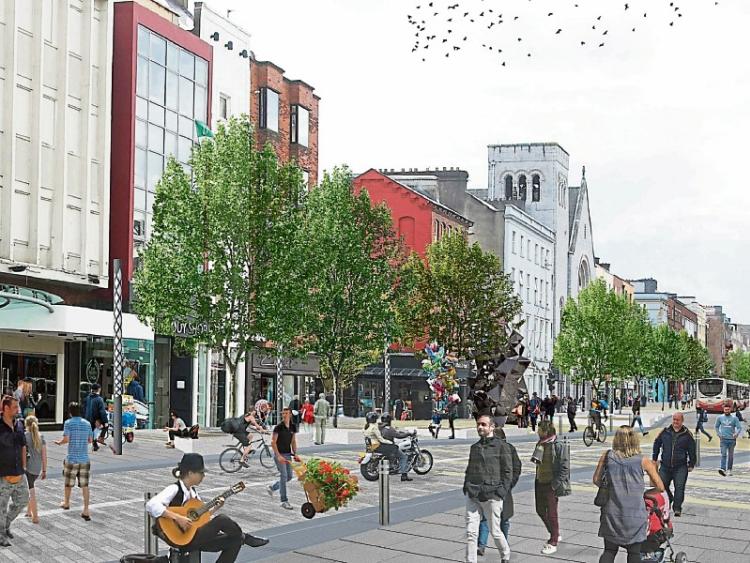 ARTISTS from all over are expected to compete for a permanent exhibition of their work in the heart of Limerick city centre, as part of the council’s plans to revitalise O’Connell Street.

The commissioning of a significant art installation comes just two weeks after Limerick City and County Council revealed plans and impressions of the main thoroughfare’s makeover.

Some proposals for the facelift, now on display at City Hall at Merchant’s Quay, show a reduction in the width of the two traffic lanes on the stretch between the Denmark and Cecil Street junction, with a resultant increase in footpath widths.

The proposals are currently going through a Part 8 planning process, which can take a number of months.

The council said that consideration must be given to the visual impact on the street and on the environment.

The commission must be no taller than the top of the adjacent building parapets, the council said.

A briefing meeting will be arranged for artists, curators and creative producers interested in the commission and will be held at Istabraq Hall, Corporate Headquarters, Limerick City and County Council, Merchant’s Quay, Limerick, at 4pm on August 19. The briefing session will be filmed and posted online.

Closing date for stage one of the submissions will be September 9 at 12pm, and a selection of the commission will be announced in December 2019, with an expected completion by the end of next year.

Maria Donoghue, who is the head of the design and delivery department at council said:

"We want citizens, businesses and groups to take advantage of the enhanced public realm we are offering – O’Connell Street will become a destination, not a thoroughfare. With the wider footpaths, high quality street furniture, reduced traffic volumes and enhanced landscaping, this will become a more comfortable environment for Limerick’s citizens and visitors to animate this new backdrop with the vibrancy we want it to facilitate, and participate in urban life such as on-street cafes and outdoor exhibitions or performances.”