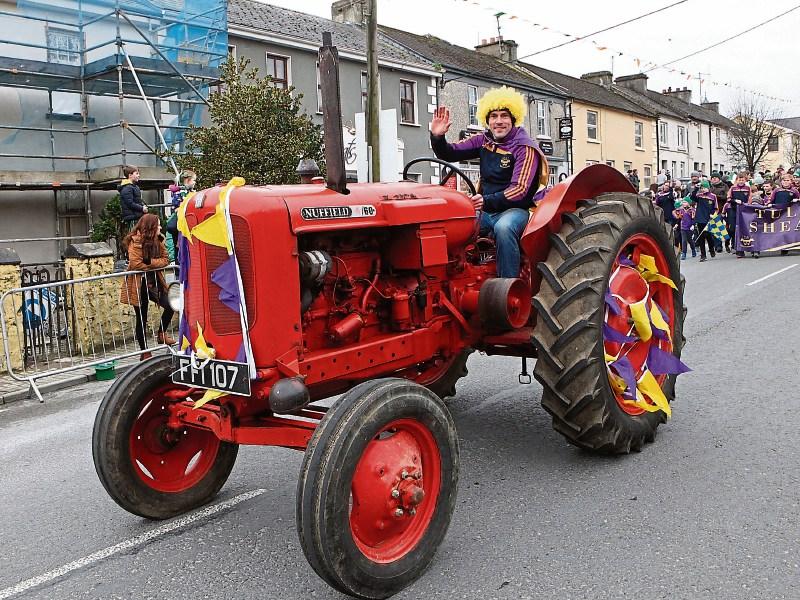 On a wig and a prayer: Castleconnell NS principal Richie Ryan on a tractor | PICTURE: Dave Gaynor

THE BITTERLY cold weather did not deter the spirits of those who flocked to Newport on Saturday morning for the first St Patrick Day parade of 2019.

It started at Centra on the outskirts of the village, passed the schools and church, before heading into the centre of the village. Such was the size of the crowd, once the parade turned the corner and looked down the hill, all they saw was a street lined with people as Newport Fire Brigade got festivities underway.

The parade was nearly cancelled in recent years due to lack of volunteers. However, Mike Coffey, one of the organisers, said locals rallied together to ensure the tradition would continue for the sake of children and adults.

Over 40 volunteers are now involved and their hard work paid off with the size of the turn-out watching and crowd marching.

“You won’t get the bands on St Patrick's weekend. In order to have a good parade you need bands,” said Mike. Attendees were treated to the CBS Pipe, Boherbuoy and City of Limerick Pipe Bands.

They were joined by over 30 floats. Theresa May even took a break from Brexit negotiations.

"We asked people to do as much novelty acts as they could to bring some entertainment to it. We had a lot of music and dancing this year as well. The Nicole Sweeney School of Dance from Castleconnell took part,” said Mike. Indeed, they took home the best group prize to Limerick while Birdhill Tidy Towns won best float.

The Castleconnell-based dance academy were the last act of the parade and they thrilled the crowd with a high paced dance routine. Such was their number, the entire street in front of O'Sullivan's bar looked to have been flooded by a sea of blue 'JoJo' bows.

The children’s performance was so well received they were asked by the MC to go down the street, turn around and come back for an encore! It may not have been St Patrick's Day, but it certainly felt like it.