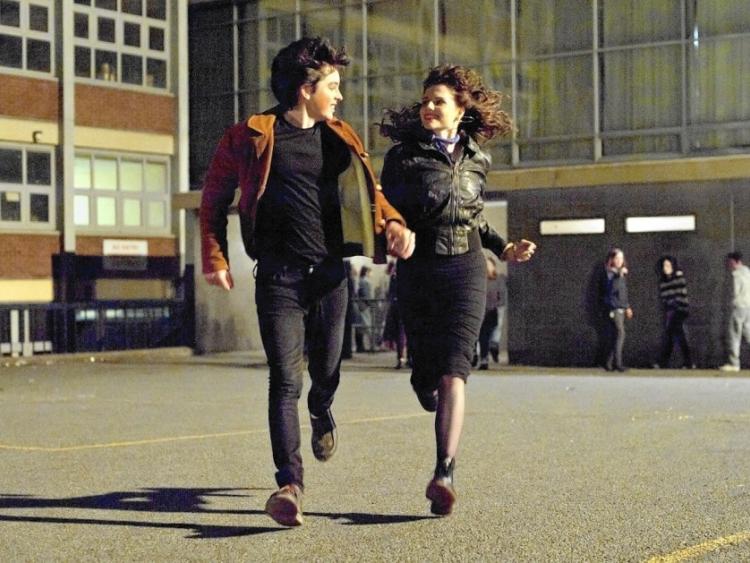 A teenage boy in 1980's Dublin struggling with both growing up and his relationship with his family, finds an escape when he forms a band with his schoolmates. The 80's were a tough time to be different though. A really lovely film, entertaining as hell and bursting with heart and energy. If you don't like this you are probably dead. A fine Irish cast lead by Ferdia Walsh-Peelo & Lucy Boynton is the icing on the cake.

Thunderbolt's a bank robber. Lightfoot's a drifter. They meet and get on like a house on fire. But two men after Thunderbolt's loot are intent on ruining their day. Michael Cimino's debut film has dated quite a bit in places but it's still an amusing watch and the main duo's antics and interactions will bring a grin to your face. Clint does his usual thing but Jeff Bridge's Lightfoot is a creation you'll fall for straight away.

Tragedy has made Iris decide to never love again. Stanley is a bloke who's never taken a chance with love. Can you see where this one is headed? A cliched plotline aside this is a nice, warm, gentle, intimate watch that doesn't condescend to it's audience or rely on mawkish drama. Jane Fonda and Robert De Niro are perfect as a pair of mismatching lovers tiptoeing around each other. Save this one for the long, dark nights ahead.

A woman, sick & tired of love finds herself mistaken for a blind date and decides to just go along with it to see what happens. A romcom but one that is likeable and not sickly, one about people you will actually care about and not want to see go up in flames. This is all down to the lovely Lake Bell and the hilarious Simon Pegg. Throw in a few big laughs and a few scenes you'll watch through your fingers and it's a grand way to spend 90 mins.

A man in the wrong place at the wrong time is mistaken for a government agent and goes on the run across America with a woman who helps him in his escape. Easily Alfred Hitchcock's most fun film, this is 2 hrs of pure escapism with Cary Grant at his most charming and likeable and Eva Marie Saint nails her part as a woman who may not be what she seems. Crackling chemistry between the leads make this a super watch.

Climate change has destroyed the planet. The only people left are those living on a perpetually moving train that circles the globe. Rich and poor are onboard and tensions are rising. Bong Joon Ho's 2013 action thriller is a blistering watch. Class warfare, social commentary, brutal violence & a touch of the surreal all add up to a rather unique story. Chris Evans leads a mighty cast including Tilda Swinton, Ed Harris, Jamie Bell & Alison Pill.

In the wake of the battle of Gallipoli a man travels to Turkey from Australia to locate his missing sons using the gift he has. This Russell Crowe led tale is an interesting and heartfelt watch about a part of World War 1 that is rarely talked about yet affected an entire continent. It's a fine history lesson too. Crowe as always is reliable and gets good back up from fellow oz actors like Jacqueline Mackenzie & Jai Courtney.

When a so called perfect bank robbery goes sideways, a cop, the robber and a power broker have to negotiate a way out of the problem to save lives. Spike Lee's twisty, turny thriller is an immensely enjoyable way to spend a couple of hours. Nothing is what it seems and if you haven't seen it before you won't have a clue how it will all end. Denzel Washington, Jodie Foster and Clive Owen all hit the spot.

When her father dies Alice returns to Yorkshire to claim the family farm for herself but it's been a long long time since she was last home and tensions are running high with the sibling she left behind. This is a tough film to recommend because like it's title, it's a dark watch that will be triggering for some but a couple of mighty turns from Ruth Wilson and Mark Stanley will keep you going through it. It's bleak, be wary.

Amy & David are stranded miles from civilisation. They take a room in the nearest place they can find and soon enough realise they are in the middle of the kind of nightmare that plays on our most intimate worries and basest fears. Kate Beckinsdale and Luke Wilson are both very believable in a well made chiller that goes from zero to 100 in rapid manner. Pull the curtains, turn off the lights and scare yourself silly.

An upmarket London drug dealer is called upon to search for a missing woman and finds himself drawn into all matter of dodginess. Some may scoff but i think this is the best British crime film since The Long Good Friday. It's exciting, stylish stuff that never lets you up for a breath. It's the film that got Daniel Craig the role as James Bond & he's a cold and calculating lead. Great support from Colm Meaney and Sienna Miller too.

What time is it? It's French film time. Nathalie is a busy lady, a philosophy teacher who flits between her job, her family and her elderly mother. Then a one-two whammy knocks her sideways. Most people wouldn't recover but Nathalie has the skills she's learned from work. The amazing Isabelle Hubert shines in this beautifully made 2016 drama. It's an upsetting but eventually powerfully uplifting piece of cinema.

A small family living in rural Northern Ireland find themselves looking to the supernatural when tragedy strikes their quiet little life. A modern folk horror film that is genuinely scary and unnerving. Shades of Stephen King and Hammer horror abound. Well written, well made and well acted by Eva Birthistle, Timothy Spall and a clutch of Irish actors including Aiden Gillen, Ruth McCabe and Brian Gleeson.

The Assassination Bureau prides itself on only killing those that deserve it and it lives by that credo until the day it's all called into question by a journalist who seeks to destroy it. Mostly forgotten these days, this is a film that deserves a new audience. It's stylish, funny, action packed, suspenseful and delightfully silly. A wild Oliver Reed and the recently deceased Diana Rigg are a very enjoyable pair of leads.

On the 30th of September 1955 James Dean's life was cut short in a car crash. The world mourned. Only 2 years before he was almost unknown, until a Life magazine did a story on him photographed by Dennis Stock. An interesting, very personal portrait of two men and how relationships can change when something is up for grabs. Dane DeHaan mightn't look that much like Dean but he plays the part well. The movie though, belongs to Robert Pattinson as the man with the camera.