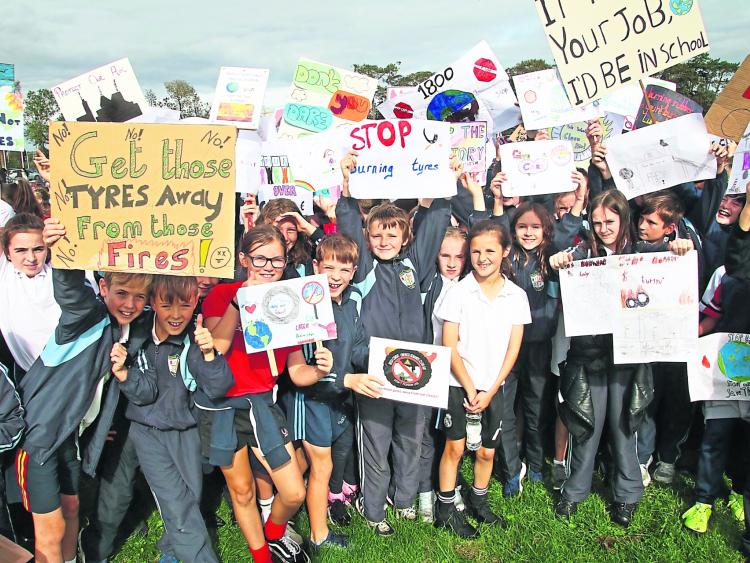 ‘WE ARE part of the local community too’ is the message from Irish Cement, who have released a statement in the wake of ongoing controversy after the granting by the Environmental Protection Agency (EPA) of a license to the firm to burn used tyres and solid recovered waste at its plant.

A number of protests have been staged in relation to Irish Cement's plans, with hundreds of pupils from four Mungret-based schools staging protests over the plant's €10m strategy.

The schools involved were Gaelscoil An Ráithín, Limerick Educate Together, Mungret Community College and St Nessan's National School which are all located close to the Irish Cement plant. Students, parents, and teachers from each come out to show they were not supportive of the EPA’s decision.

Cllr James Collins, Cathaoirleach of the Metropolitan District of Limerick, attended the demonstration on Wednesday to show his support to the young protesters.

“I am here to support Limerick school kids which are here, once again, showing the way with environmental issues here in Limerick.

“They have come out here to the park, in the shadow of the Irish Cement, to voice their concerns about the license the EPA have granted Irish Cement.

“We could have up to 2,000 pupils here every day, not far from the plant. What has been proposed to be incinerated in our community can not be allowed.”

As well as last Wednesday’s student demonstration, thousands are expected to take to the streets of Limerick this coming Saturday to protest Irish Cement’s €10m plans for Mungret.

The protests follow the Environmental Protection Agency (EPA)’s recent decision to grant a license to the firm to burn used tyres and solid recovered waste at its plant.

Well-known Limerick businessman, JP McManus will be taking part in the protest alongside his daughter Sue-Ann. When contacted this week, Mr McManus confirmed that he would be taking part in Saturday's protest and said he is “concerned" about the recent developments.

In response to the public demonstrations, Irish Cement released a statement.

“Irish Cement is aware of certain concerns relating to the recent decision by the Environment Protection Agency (EPA) to allow for the replacement of fossil fuels at its Mungret factory. The company wishes to allay these concerns and to address inaccurate information in the public domain.

“Importantly, and contrary to some public comment, there is no plan to construct an incinerator at Mungret. The license granted by the EPA simply permits the gradual replacement of fossil fuels in the existing cement kiln with alternative fuels.

“Using alternative fuels is safe and has been standard practice in cement factories throughout Europe for 30 years. Extensive evidence shows that when other factories have made the move to using these fuels, there was no change in the type or quantity of emissions.

“The use of alternative fuels instead of fossil fuels in Mungret will directly reduce CO2 emissions by up to 40,000 tonnes per year, the equivalent to taking over 12,000 cars off the road. It also fully supports the ongoing national policy to reduce Ireland’s dependence on imported fossil fuel, without negatively impacting air quality. Increasing the use of alternative fuels in Ireland's cement kilns is also a key target in the Government’s recent Climate Action Plan.

“As part of the EPA license, Irish Cement will establish a community liaison committee which will meet regularly to address concerns of residents. In addition, it will publish emissions data from the factory on its website. The license requires a new dust monitoring and control programme as well as new noise monitoring procedures.

“Irish Cement is committed to being a good neighbour and a valued part of the local community in Limerick. Commenting, Brian Gilmore, Communications Manager, Irish Cement said:

“We are part of the local community too. In fact, we are rooted in it. The factory at Mungret has provided employment for generations of local families. Our cement has helped build everything from the Limerick Tunnel to Shannon Airport, to Thomond Park, UL and countless homes across Limerick.

“We are committed to being open and transparent and working closely with our community and elected representatives to ensure that our neighbours concerns are addressed both now and into the future.”

“This initiative directly supports 105 full-time positions in the factory.”