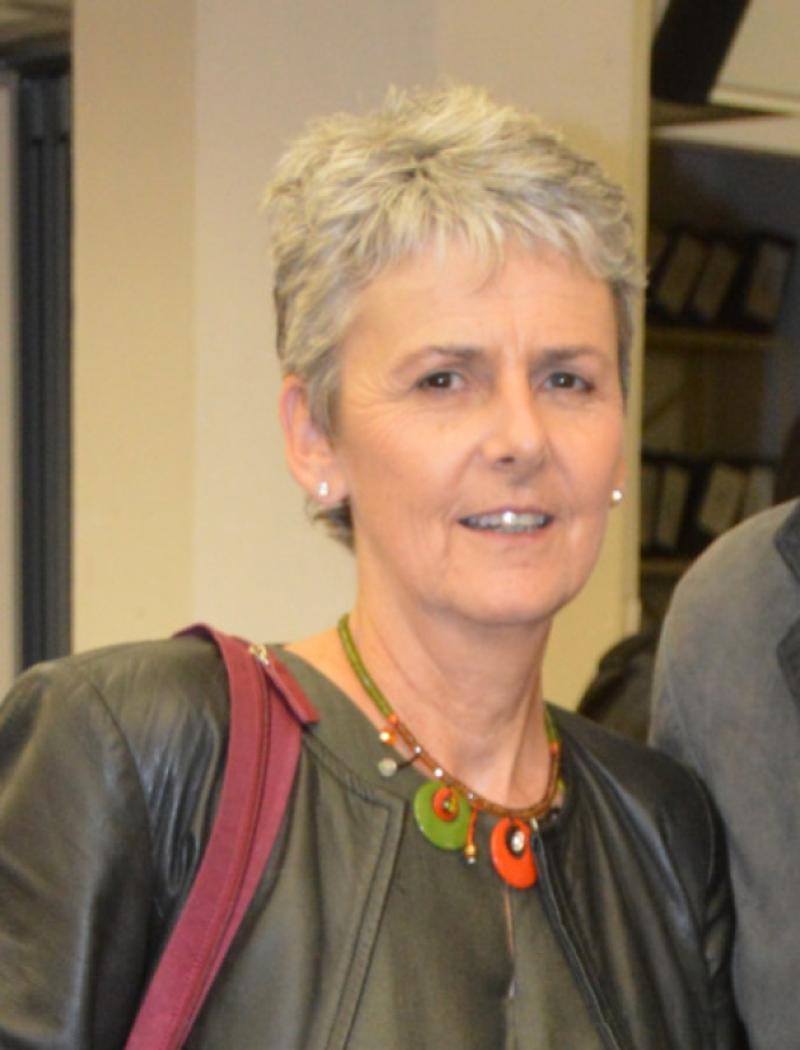 Born in Caherconlish, into a family of six girls, it will come as no surprise that women remain a recurrent theme of my work through the media of oil painting and photography.

I attended school in Caherelly, and then the Presentation Convent School, on Sexton St., Limerick. One of my earliest school memories is of the bus journey to and from school in Limerick. The journey ‘book-ended’ the start and finish of my school days over the years. Later, I attended ghe School of Commerce, Mulgrave St., Limerick. Afterwards, I worked in the Local Authority Service, firstly in South Tipperary Co. Council, then Wexford, Laois and finally Limerick Co. Councils.

After returning to live in Limerick and, while still employed by the Council, I applied for a career- break.

I returned to Mulgrave St., to the same building where I had previously studied, (now Limerick Senior College), to undertake a portfolio preparation course. I wanted to apply to Limerick School of Art and Design (LSAD) for a place in order to fulfil my ambition to study art. Subsequently, I was offered a place at LSAD and completed my BA in Fine Art Painting there, in 2006. Later, I returned to undertake a Master’s Degree in Fine Art, in 2011. My thesis was entitled ‘Concealed Revelations’ and dealt with the culture of 1950s Ireland as it related to women. Finally, I resigned from my job, when I realised that I had found ‘the job’ that I wanted to do from then on. That, of course, was painting.

While none of my family were artists, I came from a house full of books where reading and challenging one’s imagination was very influential. My father, Sean Breen, was a great reader, who also, wrote feature articles for the Evening Press every Friday, in addition to his day job. My mother, Mynie, trained as a hairdresser, and could turn her hand to any craft. In some of my recent exhibitions I have referenced patchwork quilts made by my mother, together with photographs and a home movie from the 1950s, taken by my father.

The aesthetic and culture of the 1950s has a strong visual resonance for me even today.

Indeed, my work relates almost exclusively to the role and representation of women in the 1950s. Found or family photographs provide the source material for much of my work. In fact, I have built-up an archive of photographs over the years based on this subject matter. The paintings I make address both the restrictions on women’s lives along with their strength and resilience. I find the friction that exists, between what is visible and what lies just beneath the surface to be fascinating. The challenge of my practice, as I see it, is to make artwork that contributes to a greater cultural understanding of how we live in the presence of the past. Our history plays a vital role in the stories we construct about ourselves and our lives.

Working mainly in oils, I like to make large paintings, some as large as 2 metres by 1.8 metres.

Several examples are currently on show in the foyer and arts corridor of Galway University Hospital. I really enjoy working on this scale, as I love the physical activity of moving backward and forwards in front of a painting constantly assessing the brush strokes to be applied. My paintings use many thin layers of paint which allows some of the light from the canvas to remain, suggestive of holding a photographic negative up to the light. Typically, the figures in my work appear in a ‘situation’, sometimes smothered by heavy skies. I intervene to bring colour, new scale, and new meaning to the black and white photographs, prioritising women and giving the original imagery an afterlife.

For the past nine years my practice has been based in Contact Studios in the grounds of St. Joseph’s Hospital, on Mulgrave Street, in Limerick.

This studio, which has been in existence for almost twenty years, provides studio spaces for fourteen artists, all working in various media. However, I am now due to begin using a custom built studio in Cappamore. When that space was first advertised, I felt that it was an opportunity, to begin a new body of work in a new place. I wanted to take that opportunity to re-focus my art practice allowing for a concentrated period of research and work. I, now, have three solo exhibitions scheduled over the coming eighteen months, so while I have a busy time ahead, I am, also, looking forward to the challenge presented. Recently, I have shown work in the ‘Personal Selection’ Exhibition, at LSAD, chosen by John Shinnors. My work was shown as part of the ‘idir group’ at the New York Foundations of the Arts, in NYC. Earlier this year, more work was shown, in the annual Royal Hibernian Academy (RHA) Exhibition, in Dublin.

Currently, Limerick has a very strong visual arts scene, and practicing as an artist, here, does have a positive feel at the moment.

Events like Culture Night have really helped to open-up this area to the public. Indeed, more and more galleries are taking the initiative to bring talks, seminars, readings, music and workshops, to their spaces while finding new ways to get audiences to engage with the arts, (which is a positive thing). Art and culture bring value to people’s lives, pushing the boundaries of how we see things, while allowing us look at the world in a fresh way!

The artist, Nuala O’Sullivan, has an exhibition opening in the Courthouse Gallery, Ennistymon, in January 2016. Later, next year, her work will, also, be on show in The Arthouse, in Stradbally, Co Laois, and at The Ballina Arts Centre, in Co Mayo. For more information please see: www.nualaosullivan.com and www.ormstonhouse.com