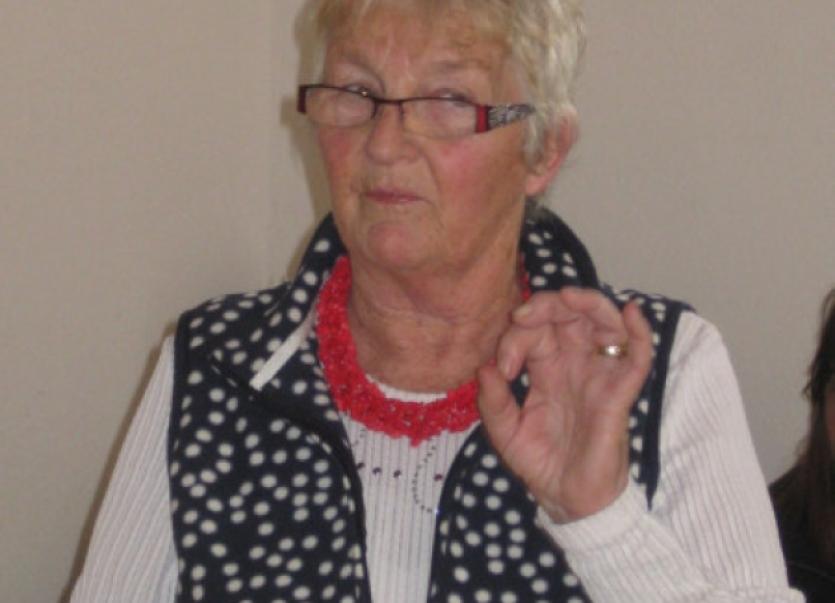 Born into ‘The Parish’ area of Limerick city, it was, and still is, a wonderful place to live.

However, today, I live in Co Kildare with my husband Joe (a former Limerick hurler). Our three children have scattered a bit though – one to The Curragh, another to Galway, and yet another to Berlin. Initially, I went to school at the Sisters of Mercy, and later, attended a Secretarial Course at the ‘Tech’, on O’Connell Avenue. The latter, was the best thing that I ever did, to further my literary career, as I acquired valuable skills in typing and shorthand. I was employed, then, for eight years by Limerick Corporation before getting married and moving to Kildare.

After almost drowning in the Abbey River, when I was seven years old, I was warned never to go near the water again without being supervised by adults.

The following summer, when I was eight years old, my father set about teaching me how to swim. On a little sandy beach, on St. Thomas’s Island, he tied a bundle of rushes together, put them under my arms, and got me kicking my feet. Gradually, I built up my confidence in the water by watching other swimmers and, in particular, Johnny Weissmuller in the Tarzan series of films. Next, I was taken into training with Shannon Swimming Club, at the Corbally Baths, with Frank and Mary Prendergast in charge. They did lifesaving courses, as well as training for competitive swimming, until I was ready to do my Swimming Teachers Examination. In fact, the teaching of swimming became my career in Co. Kildare and the mighty; Ruby Walsh was one of my pupils. When my swimming career took off, I even wrote the ‘Swimming Notes’, for the Limerick Leader newspaper.

It was not until my Leaving Certificate year that my teacher, Miss O’Flaherty, encouraged me to write whatever I wanted to.

After being published in a few magazines I decided to study at ‘The People’s College’, in Dublin. There, I studied Communications in radio, television and journalism. Subsequently, I wrote steadily for the features pages of the Evening Press until it closed down, before, writing short stories, which were broadcast on RTÉ Radio, and, also, published in ‘Ireland’s Own’. I, next, featured on RTÉ Radio One’s ‘Sunday Miscellany’, with my memoir pieces, which were mostly about growing up in Limerick, in the 1940s and 1950s.

My first commercial writing success came about as a result of reading an Evening Press advert asking: ‘Do You Have A Story To Tell?’

At that time, having spent some time in hospital, I wrote an article entitled: ‘Ill At Ease’, which was published a little later, in the same paper. At the start, I wrote stories in long hand because I didn’t have a typewriter, then, my husband, Joe, managed to find a good second-hand one for my birthday. The stories, poetry, and memoir pieces, have flowed-out freely, ever since.

People from all over the world listen to ‘Sunday Miscellany’ and I have had many letters from far flung places.

It is not just from Limerick people, but from those who just enjoy reading my stories. These letters come from such places as London, Turkey, California and Canada. Some listeners have even asked me to make a CD of my collected works, and I am hoping that this can be done in the near future. I have been published for years in ‘Ireland’s Own’ and more recently in ‘The Irish Times’. Poetry, also, comes naturally to me, and I have had the pleasure of doing a reading event at ‘The White House’, in Limerick, performing verse, with the audience even singing along with me, on what was a very enjoyable night. Last January saw the first stage performance of my One Woman Show called; ‘One Night Only with Mae Clancy-Leonard’. It was performed at the prestigious Moat Club, in Naas, which was a sell-out, ending with a standing ovation. The show was directed by Playwright, Neil Donnelly, who is insisting that it go to Limerick as well. To this end he has booked The Belltable for a date in November.

My latest book, ‘My Home Is There 3’, is a motley collection of stories.

It was published by The Limerick Writers Centre (LWC) and focuses on my many years in Limerick. The fact that no funding is available, through the Arts Department of Limerick Council, to support the publication of this book is lamentable. The LWC works so hard to encourage and support Limerick writers, yet it seems to be ignored by those who have the power to grant financial aid, for such a worthy operation. The opening story of my book involves a coming to terms with reaching the grand old age of seventy. It’s a tongue in cheek look at what happens when your hair is white and you are not very tall. You tend to get walked-into, become invisible and you need to develop an attitude. My love of history and travel is evident throughout the book, also, with the bulk of the material grounded in my years growing-up in Limerick, or at home, in Kildare. Readers may laugh at my tour of Kildare Town or my search in Prague, for the ‘Child of Prague’!

Mae’s book ‘My Home Is There 3’, will be launched by Minister for Education Jan O’Sullivan, on Sunday, September 13 at 3pm, in The Hunt Museum. Her ‘One Woman Show’, directed by Playwright, Neil Donnelly, will be coming to Limerick, in November. For further information please contact: Dominic Taylor, Community Literature Officer of The Limerick Writers’ Centre, at: 087-2996409 and email: limerickwriterscentre@gmail.com