Martin Kiely Column - One of the greatest club games ever 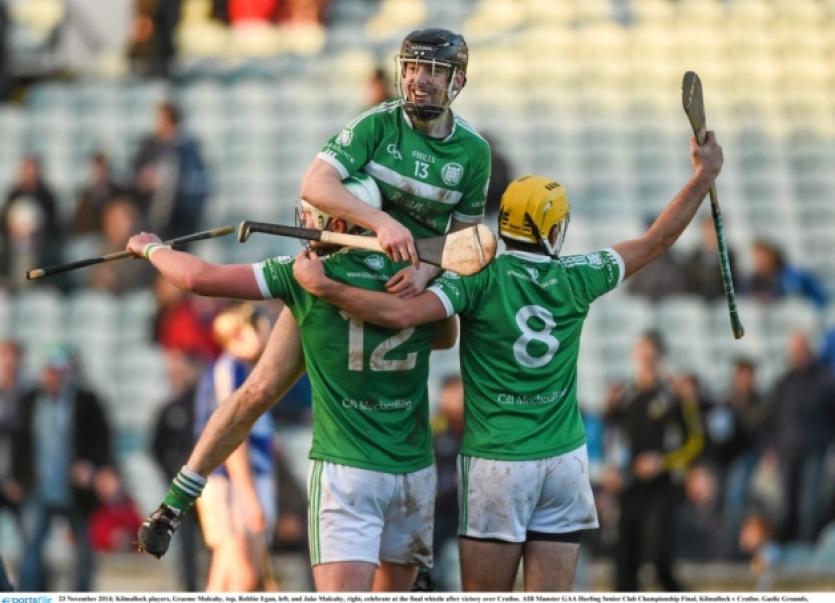 On the day the elements of winter stood still as Kilmallock produced a flawless performance to overcome a gallant Cratloe team to win what was a cracking Munster club hurling final.

This was a superb game of hurling and the crowd of just over six thousand witnessed hurling that would be well placed in the summer season such was its quality.

The conditions for hurling were ideal, no wind but a crisp bite in the air just to remind us that summer had actually passed. This for me was as good a game of club hurling that I have seen, both teams showed a great attitude and the quality of some of the scores matched anything I’ve witnessed before.

Kilmallock have won big games in the past but last Sunday they expressed qualities of a well organised and well coached team. They started this game on the back foot and by the tenth minute they were down 1-3 to 0-1. Other teams might well have reached for the panic button at that stage but not Kilmallock.

The Limerick champions needed every player to deliver to stay in this game and they did. Ger O’Loughlin has managed to develop a balance in the team that we have not seen before and that is a key reason for much of their success this year.

Kilmallock have shown steady improvement over the past few games and that is always a good indication but the nature of their win over a much fancied Cratloe will long live in the memory of those that have followed the famed South Limerick club. This was as complete a performance one could hope for.

As a team they showed coolness on the ball even when they were struggling, they soaked up what Cratloe dished up in the opening fifteen minutes and then they went about setting the foundation for victory. Cratloe scored only two points in the second quarter whereas Kilmallock landed nine. That was very impressive.

They took charge in key positions and with Graeme Mulcahy outstanding and leading by example up front. Graeme takes a lot of punishment but what a player, a man that must surely be in line to captain Limerick. Honesty and effort best describe Mulcahy. Bryan O’Sullivan played a major part in driving Kilmallock forward with four first half points and finishing the day with seven from play. O’Sullivan has good hands and this allows him to be very economical in small spaces.

O’Sullivan was badly treated by Donal O’Grady when he became manager and also John Allen.

I didn’t have to wait until last Sunday to know what Bryan O’Sullivan can do, the former Limerick captain in 2009 has never let Limerick down and if there is better on the panel at the moment then we haven’t seen them. Bryan O’Sullivan answered more than a few questions last Sunday and for me should have secured his place on the Limerick panel next year.

For Kilmallock to go in leading by three points at half time given the poor start that they had must have provided great hope when they entered the dressing room. Cratloe had opened them up on a few occasions and looked like scoring a bucket of goals.

Barry Hennessey has had a great season and he made some great saves at crucial times during the first half in particular. Will he get a chance between the posts for Limerick? I have said before that Nicky Quaid could offer Limerick more options in defence.

I think it’s time to hand him the number six jersey and it might also be time for Limerick to follow what Kilmallock have done and play Gavin O’Mahony centre forward. O’Mahony is playing his best hurling over the past couple of months with his club and the move to the forwards has given him a new lease of life.

This game required focus and that was just for the supporters because if you blinked you were sure to miss a score. Cratloe to their credit never stopped working and in Conor McGrath, Podge Collins and Conor Ryan they had players not willing to bend the knee. In the opening ten minutes of the second half Kilmallock were on top and should have scored more. McGrath flicked a ball to the net which saw Cratloe go ahead by one against the run of play.

That score really opened the game up. Cratloe would add two more points but I was very impressed by the work rate and patience of Kilmallock. They hit back with some points but when Jake Mulcahy found the net it secured a massive finish.

For that goal young substitute Robbie Hanley did most of the hard work. Jake Mulcahy had a super game and this lad has more to offer at a higher level. Hanley ran at Cratloe and his freshness and powerful legs made serious ground on many occasions.

As the game ticked towards full time it looked like Kilmallock had done enough despite a super goal from Conor McGrath. Two minutes into injury time and Martin Ogie Murphy scored the equalising point and extra time was required. In ways extra time was a cruel way to decide this game, both teams had given so much but Kilmallock were now in the driving seat.

Cratloe who were playing for the 15th Sunday out of 17 would have to suffer both mentally and physically and they did. There was only one team in the battle now and Kilmallock pushed on to win expressing themselves.

This was a super game of hurling and O’Loughlin deserves huge credit for the way he has got his charges to such heights in his opening year with them.

His vision and coaching along with his backroom team has seen Kilmallock become serious contenders now for All Ireland success. Kilmallock have often had lean years but they always produce hurlers and this latest win will continue to fan the flames that has produced so many hurlers in the long tradition of this famous club.

It would be remiss of me not to mention the quality of the Gaelic Grounds last Sunday. It was in excellent condition and that is a credit to many given the number of games and poor weather in the lead up to this game.