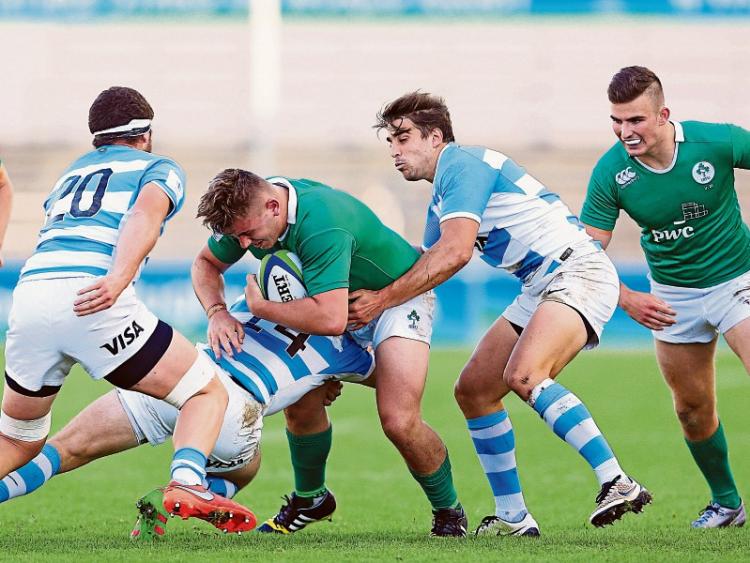 EIGHT Munster players have featured for the Irish U-20s side in the IRB Junior World Championship which is taking place in Manchester.

Ireland will appear in the final for the first time in their history when taking on previous winners England at the AJ Bell Stadium in Salford on Saturday, 7pm.

One unfortunate Munster player who has seen his involvement in the tournament cut short is Garryowen out-half Bill Johnston, Ireland’s first choice 10 at the start of the competition who has been laid low with a dislocated shoulder injury.

PROP Ben Betts, whose family live in Ballyhahill in West Limerick, got his first taste of rugby playing in the Community Games.

From there the highly regarded tighthead prop joined Estuary RFC in Shanagolden.

Because the club didn't have a senior team or an U-18s team, former Tarbert Comprehensive School student Betts moved to Young Munster.

Dynamic prop Betts has represented Munster at Youths, U-19 and U-20s level, while he has played for Ireland at U-18, U-19 and currently U-20 level.

Betts made his Irish U-20s debut off the bench in the 6 Nations clash with Italy in March.

Betts, who has impressed for Young Munster in the Ulster Bank League this season, turns 20 in August.

Dynamic ball-carrier Brown, a former Schools Cup star with Ardscoil Ris, has been capped at all provincial age-grade levels.

Joining the Munster sub-academy last year, Brown, who attended Scoil Ide in Corbally, has represented Ireland in U-19 Sevens and lined out for Munster A in interprovincial action.

Making three appearances in this year's U-20 6 Nations, 20-year-old Brown, who started out as a front row forward, crossed for a try in the campaign opener against Wales.

He started the Junior World Championship game with Georgia, and has made a significant impact off the bench in all of Ireland’s remaining fixtures.

Brown was a key member of Shannon’s 2015 Munster Junior Cup final winning side against Clonmel. It was the club’s first time to win the junior cup in 19 years.

CORK centre Daly played Schools Senior Cup rugby at PBC. Injury curtailed his earlier age-grade involvement with both province and country, only breaking through at U-20 level.

Now a sub-academy player at Munster, the Cork Con player bagged interprovincial honours with Munster U-20 and established himself as one of the form players in the U-20 6 Nations, starting every game and scoring two tries.

Daly, 20 in December, has impressed in the Irish midfield in their run to Saturday’s Junior World Championship final.

A Munster Schools Senior Cup winning captain with Rockwell College - when they beat Ardscoil Ris in the 2015 final - the second row is another to have represented both province and country from U-18 right through to U-20.

Following September's interprovincial success, the sub-academy player also lined out for Munster A in this season's B&I Cup. To date the Cashel RFC clubman, 20 in August, has made three Ireland U-20 appearances in the 6 Nations and three more in the Junior World Championships.

Munster sub-academy’s O’Brien has represented his province at all age grades and Ireland at U-19 as well as U-20 level.

Paul Kiernan previously captained Munster U-18 Schools and the Munster U-20 side which claimed interpro glory last autumn.

A current UCC player and student, the PBC graduate has been capped for Ireland Schools and Ireland U-19. Most recently, Kiernan featured in Ireland U-20s final two games of the 6 Nations and captained the side against Georgia in the Junior World Championship.

Former CBC lock Mintern represented Munster U-18 Schools before lining out for Munster U-20 this season. Now playing club rugby with Cork Con, started for Ireland’s group clash with Georgia and has been sprung from the bench in other fixtures.