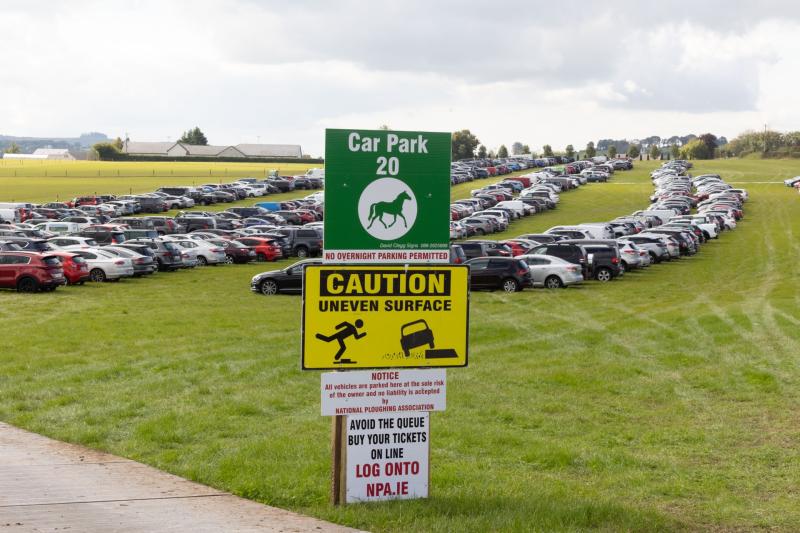 A car park at the ploughing championships in Ratheniska.

Traffic is completely backed up with people travelling to and from the Ploughing Championships according to a Portlaoise man who has been stuck in a field since 10am on Wednesday morning.

"We're still in the field. I'm here about an hour and a half, people have to collect kids and schools from creches and the guards are not able to give us a time to get out of here, they don't know when," said the man who did not wish to be named.

Pat said he was dropping two of his friends at the National and World Ploughing Championships on the second day of the event in Ratheniska when he got stuck.

"The guard at Stradbally told us where to go to drop the friends off and then we could get back to Portlaoise at Money Cross, we got 2km down the road and another guard told us you're stuck here now, there's no way out of here for ya.

"The two lanes of traffic coming from Stradbally down to Rathnieska going towards Money Cross and there's no way out and it's the same way coming back out the way," he said.

Pat said he told the gardaí that he had to collect the kids from school at 12pm, and that other travellers in the same position had been stuck in the heavy traffic since 9am.

"Parents, families and taxis are stuck in the field since 9 am, people are fighting with the guards and everything. There's about five or six guards on the road but none of them know what to do about it," he said.

A total of 91,000 attended the event on Tuesday with more than 100,000 expected on Wednesday. Upwards of 300,000 are due to attend over the three days. The National Ploughing Association say that 80,000 people are expected each day.

Gardaí have mounted a significant traffic plan for the event with some routes changing on Wednesday.