Country unites in grief during funeral of 'wonderful' Ashling Murphy 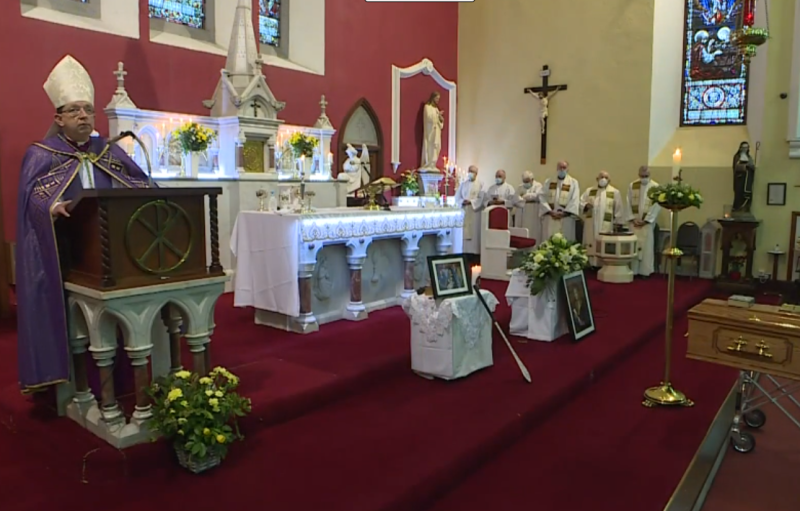 Country united in grief during funeral of 'wonderful' Ashling Murphy

The country united in grief for Ashling Murphy during her funeral mass on Tuesday morning. The 23-year-old Offaly woman was murdered last Wednesday, January 12. Her funeral took place on Tuesday morning at 11am at St Brigid's Church in Mountbolus, Co Offaly.

Crowds gathered outside the church to pay their respects and Ashling's students from Durrow National School each held a photograph of her as they formed a guard of honour for her funeral cortege.

During the mass, Bishop Tom Deenihan said "a depraved act of violence which deprived a kind, talented, loved and admired young woman of her life has since united the country in grief and support" as he addressed Ashling's family and the congregation at the church.

The funeral was attended by President Michael D Higgins and his wife Sabina, Taoiseach Micheal Martin and a number of representatives from the Government and An Garda Síochana.

He said: "Together we grieve, we pray, we hurt – this is the heavy price we pay for love – we gather as a family of faith, to be with, to support by our prayer and our presence, those whose darkness is deep, whose pain is raw and fierce. Kathleen and Ray, Cathal, Amy and her boyfriend, Ryan - you have been robbed of your most precious gift - a gift that gave only joy and love, fun and laughter to many beyond your family.

"Today we give thanks for the privilege of sharing in this most wonderful gift of Ashling Murphy, today we share our love, our grief, our faith and our comfort with the Murphy and Leonard families.

He added: "The issues raised in many ways and by many voices since this horrible act of violence invaded all our lives will, we pray, continue to evolve and bring the change we need so much, to simply give and show respect."

"Our Gospel story is our story, it is exactly what we all have been doing these last few days – the real challenge is to trust that God walks in our shoes too.

"We complete this journey with heavy hearts, we go as far as we can to a graveside and just as Jesus made a promise to his followers, his words are now Ashling’s words for Kathleen and Ray, for Amy, for Cathal, for her boyfriend Ryan and for us, ‘know that I am with you always, yes to the end of time’

A number of Ashling's cousin's delivered readings during the funeral mass while music was performed by members of Ballyboy Comhaltas Ceoltóirí Éireann, teaching colleagues and friends of Ashling.

One of the prayers of the faithful read by Ashling's cousin Rachel O'Shea said: "We pray that the many vigils that took place in memory of Ashling, mark the beginning of an end to violence against women.  May the candle light tributes bring an everlasting hope to all those who live in fear."

Before he delivered the Prayers of Commendation, Bishop Tom Deenihan, Bishop of Meath, spoke to offer "a few words of sympathy and support, on behalf of the people and priests of the Diocese of Meath, to Ashling’s family and friends."

He said: "The past few days have been a nightmare. A walk on a mild and sunny afternoon in January should be a happy event, promising the brighter and warmer days of spring and summer.  That, as we know, was not the case. A depraved act of violence which deprived a kind, talented, loved and admired young woman of her life has since united the country in grief and support.

"The crime has also asked questions of ourselves and of society.  It has questioned our attitudes and, particularly, our attitudes towards women and it has questioned our values and our morality.  Whether those questions will be addressed or passed over remains to be seen but we cannot allow such violence and disregard for both human life and bodily integrity take root in our time and culture. Pope Francis in his homily for New Year’s Day just two weeks ago said that  violence against women was an insult to God.

"We all know that no individual should die like Ashling and no family should suffer like Ashling’s. Respect is an old-fashioned word but it is an important one.  Respect was missing last Wednesday but it has re-emerged here all the stronger.  Let us respect each other."

The Bishop continued: "However, today is about Ashling and her family and friends.  I also think of Aisling’s pupils and the staff of Durrow National School who have lost a wonderful colleague and teacher. Their grief and their loss must be acknowledged and supported. As we return to our lives after today, their grief and loss remains.

"If there is a chink of light to last week’s darkness it must be the outpouring of support and sympathy that we have all seen.  It was manifested at the various vigils, it was manifested by those who assisted here, at the family home and in Durrow school over the past few days by those who quietly and discreetly provided refreshments, stewarding and whatever help that they could. Community is important and community works.  Community is needed to overcome evils such as this and community will be needed  here in the weeks ahead.

"Today, we bury Ashling as we must.  We bury a woman who lived the short years given to her to the full, who developed her talents, who reached out to others, who made a difference, who brought happiness and who was loved.

"At moments like this, our faith in Jesus Christ and in His Resurrection come to our aid. Death is not the end, the grave is not our final destiny. We must remember that.  We need to remember that.

"The Prayers of Commendation which we are about to begin talk of ‘dispersing in sorrow’ but with the hope of meeting again.  In the bitter reality of one let us not lose faith in the other.

"Saint Paul talks of the ‘Communion of Saints’, that union of those who lived good and holy lives, lives of generosity, lives that brought happiness.  One day, the prayers say, we shall see Ashling again and enjoy her company.   Until then, we commend her to God, consoling ourselves and each other with that other line from the ritual. ‘Blessed are they who die in the Lord, let them rest from their labours for their good deeds go with them’.

"May Ashling’s memory be a consolation and may she rise in glory."