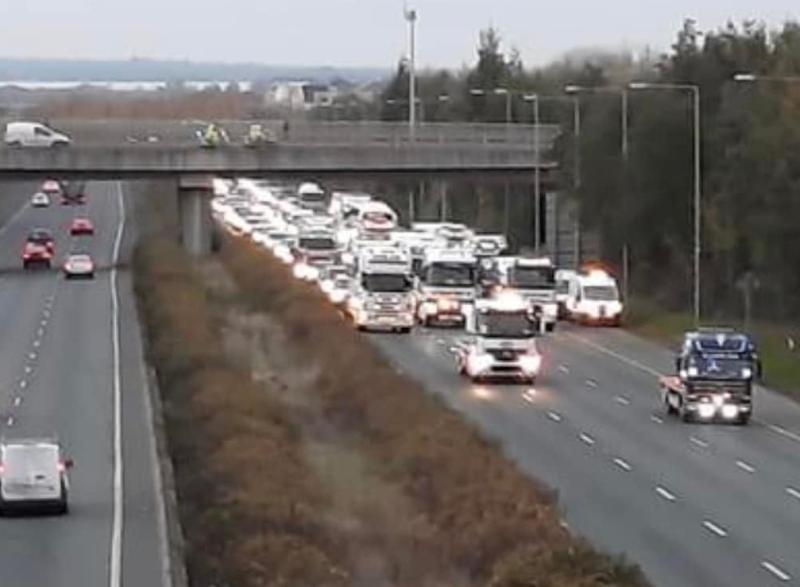 Heavy traffic is reported on some of the main motorways and approach routes to Dublin as truck drivers and hauliers take their protests about rising fuel prices to Dublin this morning.

This is the second protest staged by the Irish Truckers & Haulage Association Against Fuel Prices.

On social media posts, the group is urging lorry drivers to converge on Dublin Port, and once parked near there, not to move for 24 hours.

The group urges people to stay safe and keep emergency routes free. They also advise the protestors to let the Dublin Port staff come and go.

HGVs have reached the M50 from the M1 heading S'bound. Traffic is extremely heavy in this area. N'bound is also heaviest between J5 Finglas and M50/M1.

Over the weekend, Minister Simon Harris criticised the approach, saying the blockade was "not the way to do business".

The Further Education Minister hit out at groups including the Irish Truckers and Haulage Association Against Fuel Prices over plans for a day-long “blockade” of the city.

Retailers have condemned the plans, warning it will be the “difference between survival and closure” for many stores already badly hit by the Covid-19 pandemic.

A similar protest two weeks ago caused heavy disruption on motorways and in the city centre, and the demonstration which began this morning is expected to be even larger.

Minister Harris said the Government had engaged with the Irish Road Haulage Association, which opposes the protests, around measures to tackle fuel costs.

He said: “My colleagues Minister (Eamon) Ryan and Minister Hildegarde Naughton had a very good meeting with the Irish Road Haulage Association on Friday, where the IRHA did table a proposal in relation to an expanded rebate scheme.

“Both ministers have undertaken to very seriously consider that.

“That’s the way to do business though," Minister Harris said.

“What is not the way to do business is for splinter groups to blockade effectively our capital city tomorrow and cause other hard-pressed taxpayers very significant difficulty in going about their business and indeed people in accessing our health services and the likes,” he said.