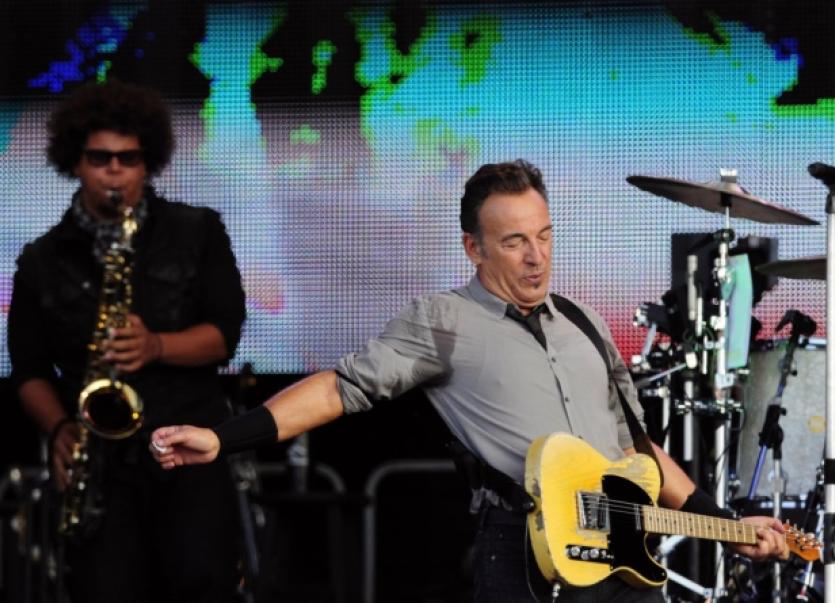 The Boss and his sax-player: Bruce Springsteen, with Jake Clemons over his right shoulder, during the Thomond Park show earlier this summer

BRUCE Springsteen’s sax-player Jake Clemons will play a second date in Limerick in December, it has been announced.

The versatile musician, plugging his debut solo album, will play on Tuesday, December 10 in the intimate Bourke’s Bar on Catherine Street in the city, which has established itself as a niche venue with strong pulling power in recent years.

The Seoda Shows gig follows the quick sale of the initially announced Monday, December 9 gig in the bar, which saw a queue form on Catherine Street last Friday as fans snapped up tickets.

The Limerick gigs are something of a coup for former Whelan’s booker John Hennessy, now based in Limerick and booking gig in Bourke’s for the past two years.

John said: “I am delighted to be doing it and working with somebody of that stature and calibre.”

Clemons, who plays the guitar, sax, piano, and drums, sings and “loves rock ‘n roll”, has worked with The Swell Season and Glen Hansard in the past and says he “continues to make a deep connection in the present by living life to its fullest through a musical journey”.

The American musician, nephew of deceased sax-player Clarence Clemons, one of Springsteen’s closest collaborators, stepped into his uncle’s footsteps on Springsteen’s Wrecking Ball tour in 2012 and has become a fixture in The Boss’ shows.

Clemons was a stand-out performer at the Thomond Park show during the summer, with Springsteen displaying noticeable affection for him throughout the gig, pushing him to the fore.

A versatile performer in his own right, Clemons will play a handful of gigs in Ireland with his band.

Tickets for the December 10 gig go on sale from Bourke’s at 1pm tomorrow, priced at €15.