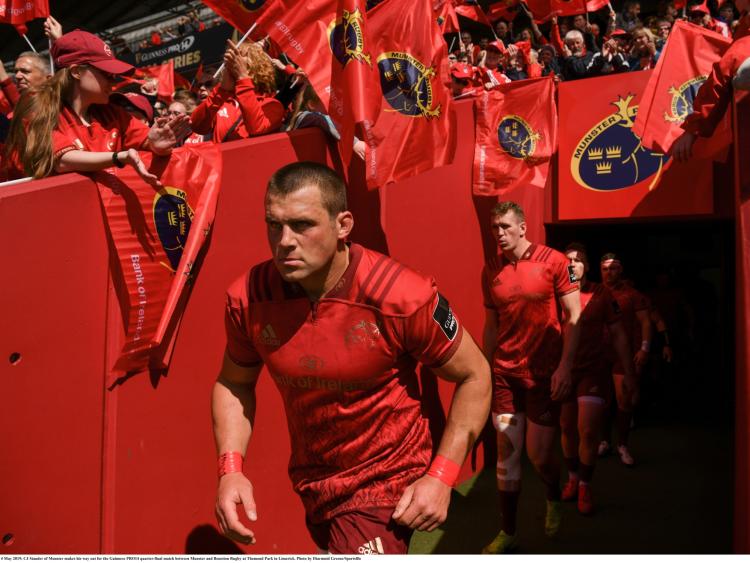 MUNSTER number eight CJ Stander says becoming a father in recent months has given him a new perspective.

The Ireland international and his wife Jean Marie are the proud parents of a four month old daughter, Everli.

Stander admitted that he had struggled in the past with taking rugby matters from his day job home with him in the evening.

CJ Stander said: “I’m a fresh dad, but just thinking of the World Cup, after the quarter-finals just trying to come back to get to the little one.

“It gives you perspective, getting home, even training, a bad day, just to go home and she’s four months old, she doesn’t have a clue what’s going on so she’s smiling.

“She makes everything enjoyable and she’s changed our lives completely. I wish it could have been sooner but there you go.

“I’m trying to be the best Dad I can be and a husband as well, so I’ve learned over the last few months that you can’t take stuff home from your job.

“If I look back I probably took too much rugby back home and made it tough for myself.

“Now it’s brought it back to me, enjoying the game more, enjoying training more and enjoying being here because Munster is a special place and the people and the coaches are building a special thing here and I’m really excited again in my eighth year to be here and to be part of this team and this group.”

However, Stander insists his focus ahead of this weekend's big Anglo-Irish showdown is on the the Premiership side's overall threat, rather than focusing on his own personal battle

“I have had many of them (battles with Billy Vunipola), he's a great player, he brings a massive ball carry to the team and his defence has been good the last few years.

“For me, we are going up against Saracens, I cannot be looking at individual battles any more, I tried to when I was younger, but I don't have the time any more.”

Having failed to win their opening home pool fixture against Racing 92, the pressure is on Munster to record a precious victory this weekend, especially given the teak tough nature of Pool 4.

Stander says Munster will have to match Sarries' physicality in this weekend's showdown.

“I'd say European weeks everyone is cranked up, it's the same level.

“I think the Racing game we had opportunities there where we could have let the game go and we came back and I think we fought unbelievably well to come back and get the draw.

“We are not saying we are happy with that draw, but to come back and fight like that but, look, this weekend is a European week for us, we are going up against the best so we want to go out there and play our game and make sure we do our stuff well during the first few days of the week and go out on the weekend and be physical and play a physical game because that is what they are going to bring, that is what they bring.”

The Lions back-rower says former Brumbies and Wallaby out-half has instilled a new sense of confidence into the playing squad.

“It's good. Stephen has given a lot of confidence, we train it, so then you can actually go out and try it on the pitch.

“I am probably the last guy to try and offload, I normally try and catch them from the lads, but he gives you the confidence and you look at it and sometimes in training it's not on, so they tell you what to do differently.

“We train a lot and again it just gives you that confidence in training so you can go out there in a game.

“If you have done 100 reps during the week, so it comes easier at the weekend.”

Stander is confident Munster have the leaders within the team that will be key to their chances of edging past Sarries' this weekend.

“I think that mental battle is going to be massive during the week. We have to make sure we train well and get our processes right and just go out there and when we get in those tough situations I think we’ve got very good leaders and the coaching staff, even at half-time, will just bring us back to what’s important for us as a team."

“With the leaders as well, we try to lead home and away, to bring calmness and confidence to the team so that’s going to be massive.”