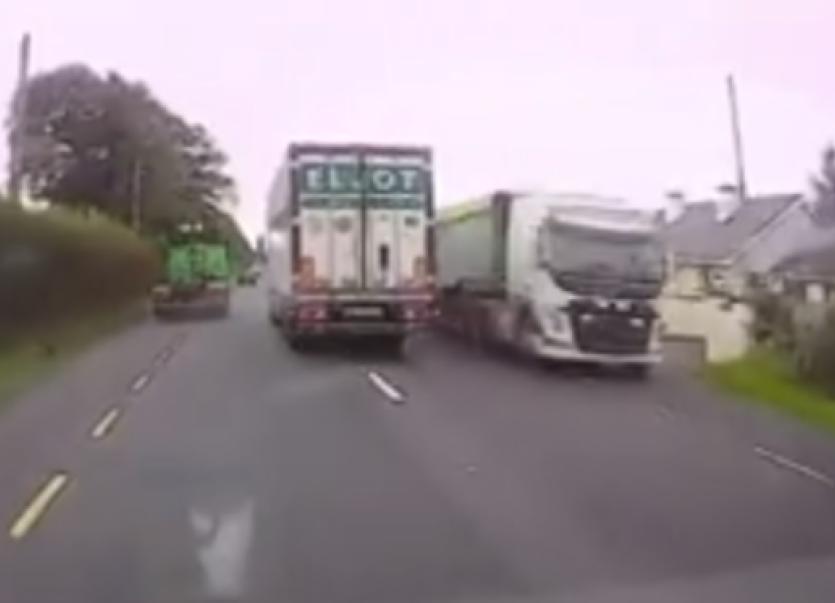 A MAN has been arrested and charged in connection with a terrifying incident on the main Limerick to Tipperary Road.

Video footage of the incident, which shows an articulated truck performing a dangerous overtaking manoeuvre on the outskirts of Limerick city, was posted on social media earlier this week.

The 45 second video, which was recorded on a dash-cam, shows an articulated truck and trailer crossing onto the incorrect side of the N24 as it overtakes a number of other vehicles including a van and a smaller lorry.

Several vehicles travelling in the opposite direction can be seen taking evasive action and pulling into the side of the road to avoid a potential collision.

One of those vehicles is another articulated truck which is travelling in the direction of Limerick city. At one point the footage depicts three trucks side-by-side on the road.

The incident happened near a number of homes and a short distance from Beary's Cross which is a known accident blackspot.

In response to a query from the Limerick Leader, a garda spokesperson confirmed a man is facing prosecution in relation to the incident.

"Gardaí have arrested and charged a man, 50s, in relation to a dangerous driving incident on the N24 between Limerick city and Pallasgreen on September 14, 2020. He was arrested on September 28 and detained at Roxboro Road Garda Station. He was later charged and is due to appear before Limerick City District Court on October 26 at 10.30am," he said.