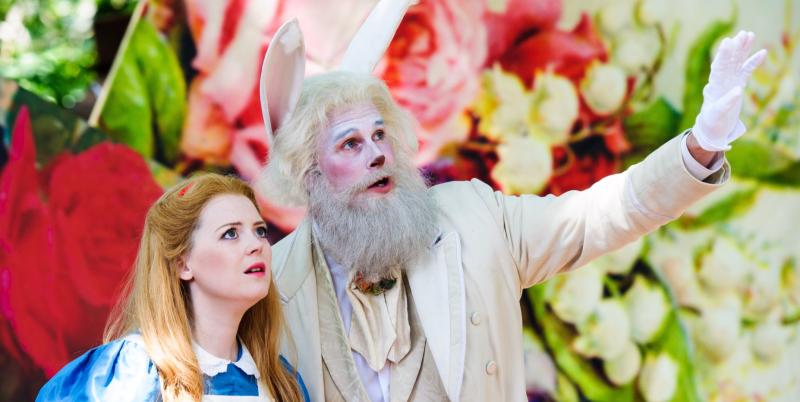 OPERA Collective Ireland will present the Irish premiere of Alice's Adventures in Wonderland, an opera for all the family based on Lewis Carroll’s beloved children’s book.
Composed by Will Todd with a libretto by Maggie Gottlieb, this fun and engaging opera opened to rave reviews at its Opera Holland Park premiere in 2013.
Directed by Caroline Chaneywith set and costume designs by Leslie Travers, Opera Collective Ireland’s touring production features a vibrant young Irish cast and the Irish Chamber Orchestra conducted by Stephen Barlow.
Eleven-year-old Alice is jolted out of her daydreams when she meets a talking Rabbit who insists she follow him to a mysterious Wonderland... In this fantastical place Alice comes across a number of peculiar characters, including a relaxed caterpillar, a happy cat, a depressive hare, a white knight, a romantic duchess, a mad hatter and a sleepy dormouse, and learns that all is not well in Wonderland…
From the familiar characters, blues-inspired music, and comic texts, this can be enjoyed by audiences young and old.
The perfect Easter treat and family day out. Alice's Adventures in Wonderland comes to the Lime Tree Theatre on Wednesday April 6. Tickets from €20 . More details @limetree.ie

Belters Only & Jazzy return with new single - “Don’t Stop Just Yet’
Breakout dance music supergroup Belters Only & Jazzy have unveiled new single ‘Don’t Stop Just Yet,’ out on March 25 on Polydor Records.
The second single released by Belters Only, the buzzworthy Dublin collective featuring famed Irish DJ and producers Bissett and RobbieG, it follows the viral ‘Make Me Feel Good’. It is currently sitting at #4 on the UK Singles chart and #1 in the Irish charts for the second consecutive week, also clocking up 15 million Spotify streams!
The track exploded on TikTok after being embraced by influencers and TikTok-ers alike. In total, the top five videos using this sound accumulated an impressive 2.5 million views, over 13,000 creations and more than 13 million global views within the past six days. Recent remixes featuring James Hype and Tion Wayne & Bru-C have clocked up an additional few hundred thousand Spotify streams.
The second dancefloor anthem in quick succession, ‘Don’t Stop Just Yet’ is poised to become another Belters Only hit... and a trusty addition to your summer playlist!

TO DO
A Gig For Ukraine Friday April 1 at Dolans.
A gig to gather much needed funds for Ukraine.
All proceeds will go to Medicines Sans Frontiers Ukraine.
Bands playing on the night will be T.A Narrative, Parliament Square, dREA and John Steele.

TO LISTEN
FYA FOX – HIT ME WHERE IT HURTS
FYA FOX marks her territory, emerging onto the scene being tipped as “Hot For 2022” by HotPress. Rest assured this alt-pop empress isn’t messing around when it comes to her first release of 2022! ’Hit Me Where It Hurts’ conveys a once vulnerable side to FOX, but does it end like all good fairy tales?

TO SEE
PAURIC O MEARA @DOLANS
THURSDAY 31ST MARCH @ 8PM
Tipp man Pauric has been described as “One of Ireland's most exciting young stars-in-the-making’. Don’t miss your chance to catch him live in Limerick this Thursday!
Tickets @Dolans.ie