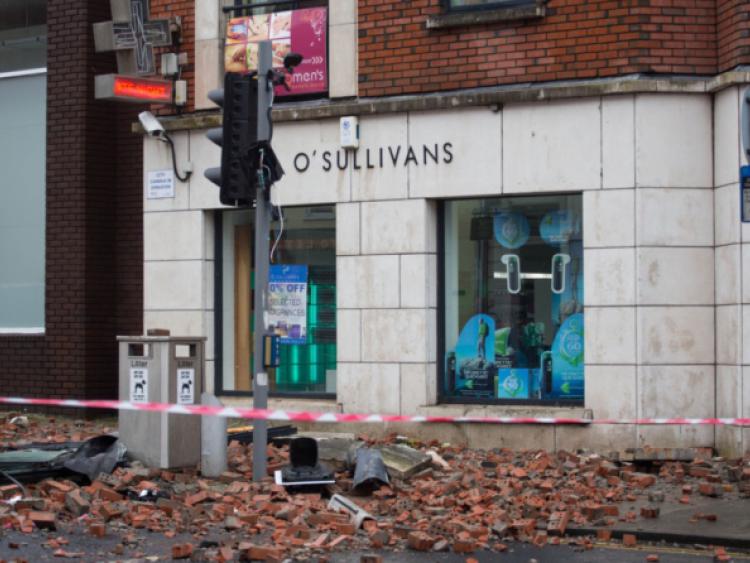 SARSFIELD Bridge was in the eye of the worst storm ever seen in Limerick city this Wednesday afternoon, after part of a building collapsed and the roof of the boat house was blown off by Storm Darwin.

A woman residing in the top floor above O’Sullivan’s pharmacy on Sarsfield Bridge was evacuated after part of the building collapsed, while others living in the building were reported to be on holiday at the time of the dramatic incident.

The pharmacy was closed, along with the beauty salon, also downstairs.

Sarsfield Bridge remained closed off from just after 2pm up until 9pm due to the fallen debris in that area, as well as the damage caused to the boat house of Limerick Boat Club.

The road was briefly opened for a few moments after a woman who was going into labour was rushed to the Maternity Hospital on the Ennis Road across the river.

One of the ornate decorative lamp-posts on the bridge was also bent in two such was the force of the gales.

James Hogan, of JP’s bar on Sarsfield Bridge, said it was just another quiet Wednesday afternoon until 2.10pm when he and his customers witnessed the building “coming down like Lego”.

“I was looking out the window, and it just fell down. A few of us ran out to make sure no one was injured. I was looking at it, but I didn’t think it was happening,” said Mr Hogan, who was later advised to close the building and evacuate in case there was further damage caused.

Emergency crews were at the scene, and were redirecting traffic, with many motorists reporting lengthy tailbacks as many roads were closed off for hours.

“There was one woman in the building at the time and she got the fright of her life. She’s making alternative arrangements for somewhere to stay for a night or two,” said one member of the emergency crew.

Dermot Moloney, president of Limerick Boat Club, was surveying the damage to the roof of the club’s boat house, which was torn off by near hurricane winds and swept into the River Shannon.

Mr Moloney said the ‘Belfast style’ roof had been in place since 1875 – some 139 years – and said many people are “shocked and aghast at the enormity of the destruction caused”.

“It stood in good stead for all those years. I doubt it’s salvageable now. Most of it is in the river. All the boats there are fine, bar one. Our first priority is to make the building is secure and safe. It’s very untimely with the boardwalk just being completed,” he told the Limerick Leader.

He said the boat club, which was previously used for night time events, is not currently active, even though it had been earmarked as a landmark destination for a €20m redevelopment by developer Michael Daly during the boom years. He said funds are not currently available to repair the roof, but added that it cannot be left in that state due to its gateway status to the city.

In the University of Limerick, the Clare side of the campus was completely without electricity for a time, while the main entrance to the campus was closed due to fallen trees.

Further destruction was caused at the People’s Park, after a tree fell, crashed through the railings and onto the road, which was also blocked off for a time.

One of the entrances to the North Circular Road was also closed off due to a fallen tree.

A tree fell on a van on the Knockalisheen Road, but no injuries were reported from this incident.

The Redemptorists at Mount St Alphonsus on the South Circular Road also witnessed tiles “flying off” the roof of the monastery and the church.

Fitness classes in ProZone in Thomond Park were also cancelled on Wednesday night, as people were advised to stay indoors if possible.

The University Arena was also closed until 7am this Thursday.