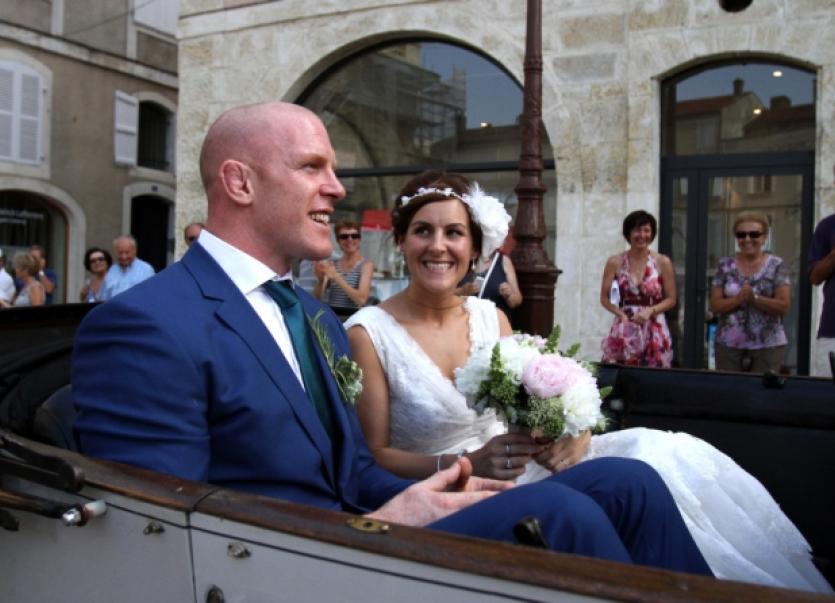 RUGBY legend Paul O’Connell enjoyed a different kind of victory in France at the weekend when he married his long time girlfriend Emily O’Leary.

RUGBY legend Paul O’Connell enjoyed a different kind of victory in France at the weekend when he married his long time girlfriend Emily O’Leary.

The couple, who met more than a decade ago, tied the knot at Sainte Marie Cathedral in the town of Auch - around an hour outside of the French rugby heartland of Toulouse.

Family and friends of the couple attended the wedding as did several well known rugby stars including Ronan O’Gara, Keith Wood, Alan Quinlan and Jerry Flannery.

Emily, who arrived fashionably late for the wedding in an old-syle Renault car, wore a flowing white chantilly lace dress with a draped back and a small trail.

She wore a headdress of flowers and feathers.

Her bridesmaids, who wore long dresses of mint floral print, were her two sisters, Stephanie and Danielle and her best friend Lorraine Murray.

His best man was his brother Marcus and his groomsmen were his brother Justin and Emily’s brother, Paul.

Paul and Emily’s son, Paddy(3) played an important role on Saturday as pageboy while Paul’s niece, Julie, was the flower girl.

Following the wedding, which took place in glorious sunshine, the wedding party took over the Chateau

The 18th century estate, which is set amongst rolling hills and fields of sunflowers has won several awards and, previously, it has been voted the Best Chateau for Special Celebrations’ by the London Times.

According to reports, wedding guests enjoyed a banquet of seasonal produce such canapes of local foie gras with fig chutney or pan-fried duck breast, starters such as prawn and fennel bisque, warm wild mushroom tartlets with a spit-roast as the centerpiece.

It is understood, the wedding cake was the traditional French croquembouche.

Paul - a Freeman of Limerick - is the youngest son of Michael and Shelagh O’Connell, of Drombanna. Emily is the daughter of Pat and Keave O’Leary, who live in Clarina.