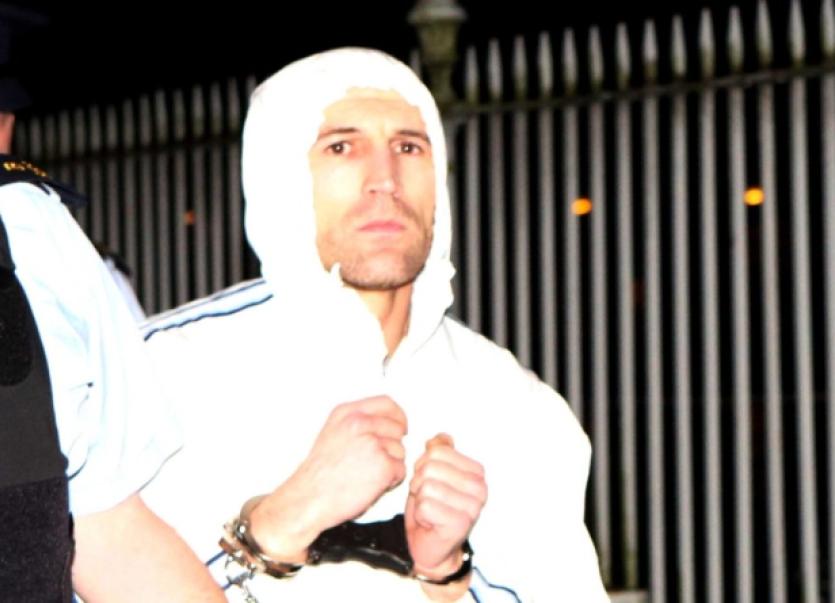 A VIOLENT criminal has been sentenced to ten years imprisonment for his role in a tiger kidnapping in the Castletroy area of the city.

A VIOLENT criminal has been sentenced to ten years imprisonment for his role in a tiger kidnapping in the Castletroy area of the city.

During a 13 day trial, which was heard at Limerick Circuit Court, the jury was told Mr Cusack and Mr Reddan were watching television in the house when a number of men entered the sitting room and threatened them with a knife and a handgun.

Both men were then gagged, tied up with cable-ties and placed in the back of Mr Cusack’s Toyota Dyna pick-up truck and driven to a derelict house in the Ballyclough area where Mr Reddan was released.

He was instructed not to contact the gardai and to inform Mr Cusack’s parents that he would be killed unless a ransom was paid.

The prosecution case was that the culprits demanded the payment of €500,000 as Mr Cusack’s mother ran Garryowen Post Office.

Mr Reddan then made his way to the Cusack family home in Garryowen but in the meantime, Stephen Cusack managed to escape and raise the alarm and no money was ever handed over.

17-year-old Jonathan Blackhall was previously sentenced to two years detention after he pleaded guilty to his role in the offence.

The third culprit has fled the jurisdiction and has yet to be apprehended by gardai.

Evidence was heard during Coughlan-Ryan’s trial that Mr Blackhall had identified him as one of the suspects.

DNA consistent with his was also found on a sock, which was used to gag Mr Cusack and the defendant was identified during a line-up at Henry Street garda station.

During a sentencing hearing Judge Carroll Moran was told Zachary Coughlan-Ryan has 22 previous convictions - a number of which relate to serious offences.

These include, escaping from lawful custody, possession of knives and assaulting prison officers.

He has also served a 15-year prison sentence in Great Britain for armed robbery.

However, he said he maintains his innocence. “He did not do this offence, he maintains he is absolutely innocent,” said Mr Nix who added that “nobody got hurt, no property was damaged and no money was handed over”.

Judge Moran said while the defendant was “entitled to protest his innocence” he, as a judge, had to act on the verdict of the jury.

He said there was a “fairly coercive” case against the defendant who has a “bad record”.

The judge noted prosecution evidence that the tiger kidnapping had been conducted in an amateurish way but, he said, that didn’t reduce his level of culpability.

He said the appropriate sentence in the case was ten years imprisonment but he reduced this to eight years and three months to take account of the time which Coughlan-Ryan has already served in custody.

The sentence, is to be served consecutively to a two year prison sentence, which was activated last week.

That sentence was imposed at Cork Circuit Court in November 2011 after Coughlan-Ryan was convicted of assaulting a number of prison officers.

The defendant, who sat with his legs crossed did not speak as the sentence was handed down.

Leave to appeal the conviction was granted by Judge Moran who granted free legal aid in the event of an appeal being lodged.

There was high security around Limerick Courthouse for the sentencing hearing with members of the armed Regional Support Unit (RSU) assisting uniformed gardai.