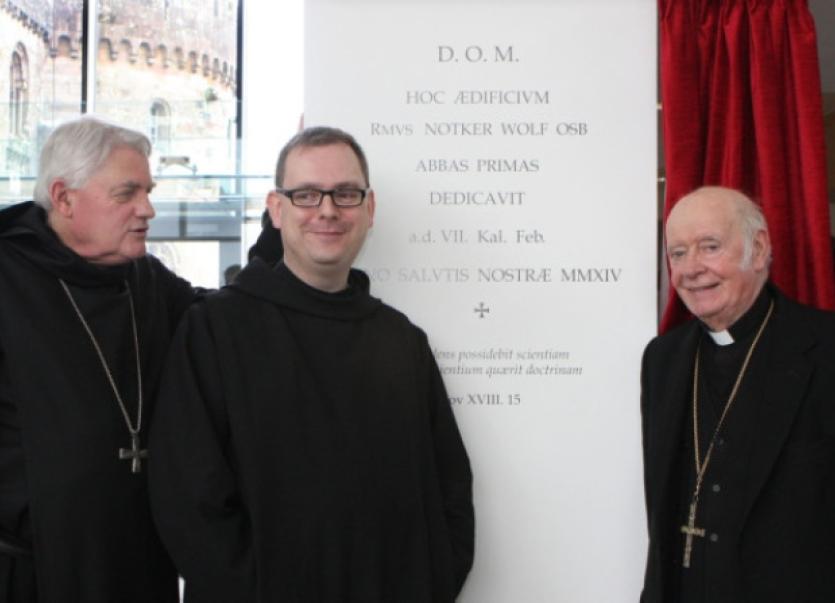 Right Reverend Dom Notker Wolf, Abbot Primate of the Benedictine Confederation, who flew in from Rome, said he was envious of Glenstal’s pupils.

“I would have loved to have come here. It is so beautiful, so bright, the whole atmosphere – I loved it when I saw it. Congratulations on this wonderful building,” said the Abbot Primate, who presided at morning Mass before doing the official opening. The academic block contains 18 classrooms, three science laboratories, study spaces and admin offices.

Br Martin Browne, principal, did the official blessing on the previous Friday. A large attendance of invited guests attended Sunday’s ceremony, which was held in the atrium of the new school building.

The subtle three-storey extension built against the castle – mostly glass facade – was designed by Limerick architects, Thompson’s and built by LM Keating.

Abbot of Glenstal, Fr Mark Patrick Hederman said they were able to marry the old and the new and to integrate the building seamlessly into the surrounding landscape.

“The magnificent indigenous sessile oak clinging to a rock outside these windows is testament to this delicate vision and respect for nature, as are the roots of sycamore and the spreading cherry-laurel tree, sprouting before us as we speak in this atrium,” said Abbot Hederman.

He told those assembled he attended the first school building committee meeting on Monday, March 5, 2012 at 4.30pm.

“I told them that we wanted a 280-seater academic block for our school by the beginning of September 2013. Greg Ashe [ICT manager] tells me I left the meeting at 4.31pm, a minute later!

“I knew that the committee we had in place would deliver and indeed they did. What we have here today is what St Benedict would call a ‘state of the art’ ‘instrument of good work’.

“We believe in education. We believe that real education is a miracle that happens when someone gives you the golden key, to open the door and walk out into this wonderful world, towards freedom and fulfilment. This miracle happens when there is personal contact, of the educational variety, between gifted people in a human-sized environment. Everyone of us is gifted, we just have to know how to release that gift,” said Abbot Hederman.

Their belief is the miracle of genuine education is more likely to happen in a small environment where one person can influence another in an intimate setting.

“Small is beautiful where genuine education is concerned. And it must be the concern of every parent and of every teacher to try to ensure that your child, and that as many of the next generation as possible, can enjoy this privilege.

“There are horses for courses and what suits one child may not suit another. It is up to us to find the right place for every child at the right time. And in education, as in every other domain of human life, one person’s food is another person’s poison.

“When we talk about privileged education we must understand that education, wherever it happens, is always a privilege. No one can force it; we can only try to coax it into existence for those who cross our path.

“We can provide here, and especially in this new building, genuine education for a certain number of people in the future,” he said.

But the new building, or indeed any building, isn’t the reason they can release the potential of their pupils, added the abbot.

“It is because of the community of people who are committed to this task, and I am talking about the larger Glenstal community of monks, parents, teachers, staff, carers, helpers and workers, who make up the magnificent family we are privileged to be part of,” said Abbot Hederman, who thanked individually all instrumental in the project.

He said he didn’t think they could ever have got such efficiency and value for money at any other time in the history of this country.

“Of course, the best time for building is also the worst time for fundraising. We had no really massive donors for this project, as always we relied on our parents and friends.

“In a time of recession your magnificent donations were the most valuable support and encouragement to us. But we had to invest a great deal of our own funds and borrow from the bank to the tune of €1.5m to reach our target of €6m, which we know to be great value for what we have got. However, if you win the lotto during the week, don’t hesitate to share the pickings,” he smiled.

The abbot paid a special tribute to the late Br John Matthew Corkery who was “looking down from heaven, making sure that all is in order”.

“Next Friday will be his second anniversary. He had dreamed of all this long before the rest of us.”