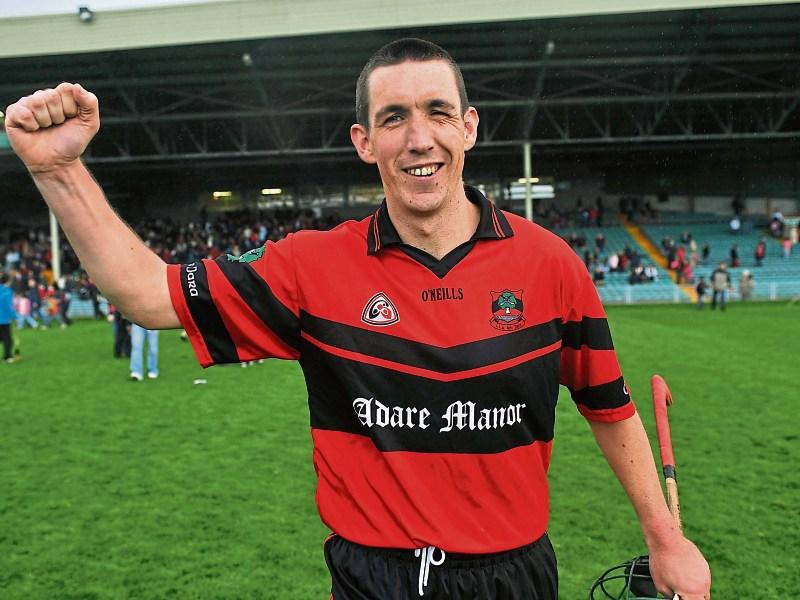 Brian Foley during his club hurling career with Adare

A winner of five county medals with Adare. Son to a Limerick Senior hurling selector and brother to two Limerick inter county stars, there was only ever going to be one sporting path for Brian Foley and that was into hurling management.

“When I did my degree in PE, coaching was very much at the front of my mind then. It was hard to start coaching really until I finished my playing days with Adare. It would be four years ago now that Mike O’Riordan rang me to get involved in the Limerick U/17’s and four years later here I am with this talented group of players” Foley admits.

The Lismore County Waterford based teacher recalls his early memories of being on a hurling sideline.

“My Dad (Vincent) was involved in the 1992 Limerick Senior team that won the league. He was a selector under Phil Bennis, alongside Pat O’Sullivan, Tom Bulfin and Michael Weekes.

Limerick were 13-3 down at half time and they won 14-13 I believe. Ray Sampson got the winning point in the lashing rain in the Gaelic Grounds. I would have been around 14 that year. I remember sitting in the dugout that day. It was immense”

The Foley household was a hurling nursery with analysis of games played by all four sons, a regular part of the week.

“Four boys growing up in the one house was always going to be about sport. Whether you were hurling with Adare or Limerick, it didn’t matter. You would all come home and assess a match. There would be no barking or shouting, we would just talk about where you have been good and where you could improve. I remember one night, Mark would have had two All Stars at this stage and we were chatting. I mentioned that Dan Shanahan had caught two balls over his head. Mark didn’t like it one bit. The next day he was much better under the high ball. He would be the same with me and I would have been with Jack too. We were only trying to make each other better”

The analysis of the game is something that Foley admits is necessary, but cannot be the be all and end all. The basics of the game remain the bed rocks for success.

“We were very successful in the 90’s and the 00’s but hurling has changed massively now in the analysis and appraisal of the game.

“Video analysis, individual analysis, lads get personal, one on one clips to look over. You can get bogged down in that, but the main thing is to keep the balance. At the end of the day, the principles of the game have not changed. You still have to go out and hurl”

Foley's teaching background gives him an advantage particularly working with players who have just left school.

“You just try to pass on what you know and maybe where they can improve on a small thing. It is all part of the game. There are no experts, we are all trying to improve and get the best for Limerick hurling. We have had a good campaign, four great games. Some lads have done really well on some days, others have performed on other days, you are just looking for 11-12 lads to perform to their best of any day and you could get away with that. The process is the thing. Performance comes from that.”

Foley has been part of Pat Donnelly's backroom team since they were in charge of the Minor side together in 2016. The Adare native is quick to remind Limerick GAA fans that the making of this team is all about the sacrifices made by the players, their coaches in schools and clubs and most importantly their parents.

“We are just lucky to be involved this year with these lads. We do not forget those who have come before us. People like Brian Ryan, Joe Quaid, Eamon Cregan, Stephen McDonogh and Jerry Wallace. They have put Limerick on the map again. Look at the work in the schools too like Ard Scoil Rís, Doon, Hospital as well as all the clubs too.

“The player's parents are the key factor for me. The sacrifices put in by them and the clubs is huge and the performance this weekend will be for them”

Ahead of the final clash, Foley maintains that the ‘Cats’ are more than a match for his side who enter the game as favourites.

“When you think Kilkenny, you think tradition. I have seen their games. They are a mixture of physicality and good hurlers, which I think might suit Limerick.

We don’t have a good record against Kilkenny as a county, but that matters for little this weekend. We won’t fear them and they won’t fear us. May the best team win on the day.