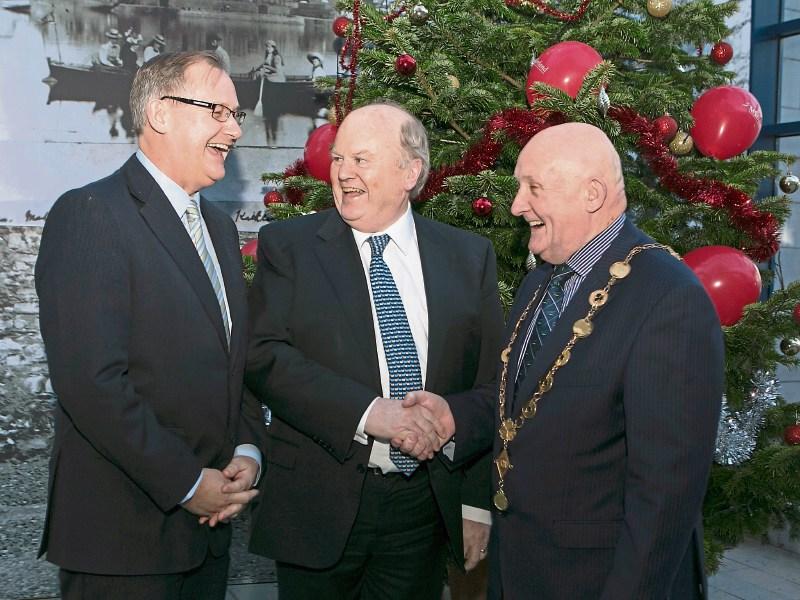 HE may not have topped the poll in Limerick in the last general election, but the tide always turns for Michael Noonan.

In council chambers in Merchants Quay, the Finance for Minister could only move like treacle, such were the number of well wishers and supporters of all political persuasions as he received a mayoral reception in honour of his career.

They were all there. Minister for Employment and Small Business, Pat Breen, from Clare, the head of the Limerick garda division, Chief Superintendent Dave Sheahan, University of Limerick president Don Barry, representatives of the arts community, and a coterie of councillors.

To top it all, it was a Fianna Fail Mayor - Cllr Kieran O'Hanlon - who presided over the ceremony.

His work might be in the cold world of finance, but here in City Hall there was a lot of warmth, affection and respect for the man who began his career in 1974.

He said it was a "unique kind of day for me", and in particular wished to remember his late wife Florence, and the late Richard Butler, father of councillor Daniel Butler.

He said his personal highlight of the year as 2016 draws to a close was forming a Government, which he said “looked like Mission Impossible” at one stage, followed by getting the Budget through.

“Limerick is in the middle of a rebirth," said Mayor O'Hanlon, "following a number of significant developments in recent years, including the National City of Culture, continued funding of the regeneration programme, jobs announcements, Limerick Twenty Thirty, investments in the University of Limerick, LIT and UL Hospitals Group.

"It’s true to say and few would argue that Michael’s guiding hand has been pushing these projects over the line for the people of Limerick and the mid west region.”

Newcastle West councillor John Sheahan paid tribute to him as "the glue that held this country together in its sorrowful time of need".

"It's great we're not here talking about international crises or bankruptcies," he said.

Having the Dooradoyle man at the helm of the nation's purse-strings, has also helped Limerick become "the envy of all other local authorities."

On a personal note, he said his wit is second to none, and he's the best company on a night out.

Leas Cathaoirleach of the Adare/Rathkeale area, Stephen Keary, said that the 954 jobs created in Limerick city and county this year has to be attributed to Michael's presence as the Minister for Finance.

"Limerick is on the way up," he added.

"You've never got an easy day since you went in there, and we still owe €8bn," said councillor Eddie Ryan.

Chief executive of Limerick City and County Council Conn Murray said that there has been "an aligning of stars" in Limerick in recent times, but said "these things don't happen by accident", noting the creation of 9,000 jobs in the region in the past three years.

He was presented with a piece of art by the well-known local artist Tom Greaney, fittingly entitled In the Spring.

Asked by this reporter if he was sick of being asked when he is going to retire, he laughed and said while he wasn’t sick of the question, his answer will remain the same – “not yet”.