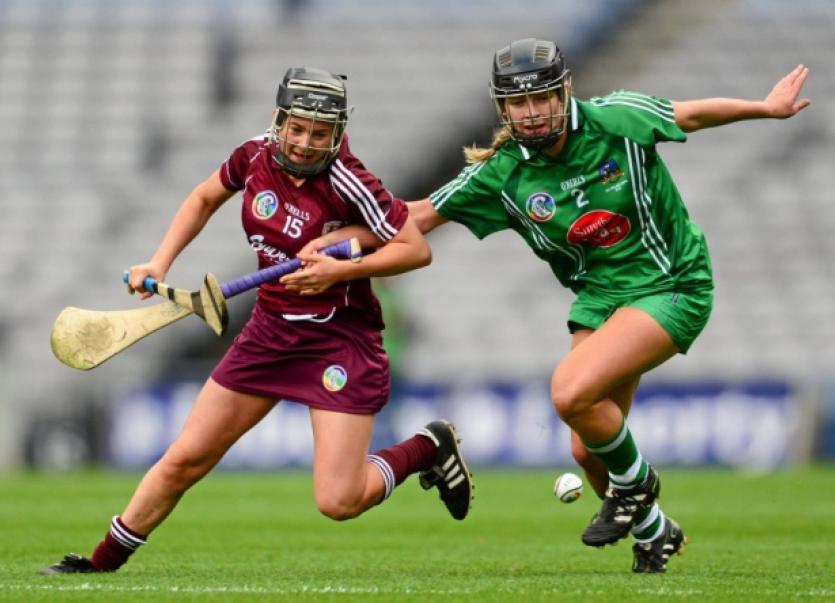 LIMERICK’s dreams of claiming the All-Ireland intermediate camogie title were shattered by Galway on a scoreline of 0-12 to 0-10 in Croke Park on Sunday.

LIMERICK’s dreams of claiming the All-Ireland intermediate camogie title were shattered by Galway on a scoreline of 0-12 to 0-10 in Croke Park on Sunday.

Galway’s greater experience at this level proved crucial in the end as the Connacht side edged the decider by two points.

Gritty Limerick remained bang in contention right to the final whistle, with Niamh Mulcahy’s pointed free in the 59th minute, drawing the Shannonsiders to within a point of their opponents, who were playing in the final for a second successive year.

However, a contentious awarded free to Galway in added time, pointed by Rebecca Hennelly, proved the match clinching score.

Although Limerick can feel justifiably proud of their performance against physically stronger opponents, the Joe Quaid-managed side will feel a degree of frustration too at never quite reaching the great heights of their previous championship outings this year.

This was a final Limerick might well have won, but a lack of scoring power and big-game experience perhaps more than anything else proved their undoing.

Yet this Limerick camogie side has come a long way in 2013 and hopes will be high that this talented bunch of players can land an All-Ireland intermediate title in 2014.

Division 2 League winners Limerick notched the first score of the game in the blustery conditions when busy wing forward Caoimhe Costello pointed the Shannonsiders in front inside two minutes.

Galway dominated the next 10 minutes as Limerick seemed to suffer from big match nerves in the rarified atmosphere of an All-Ireland final.

After Limerick’s Niamh Mulcahy and Galway’s Rebecca Hennelly had traded points from frees, the Connacht side outscored their opponents 0-4 to 0-1 over the next 10 minutes.

Limerick, who had beaten Galway in the League in April, struggled with their first touch on a slippery top surface as their opponents built a useful 0-6 to 0-3 lead.

To their great credit, Limerick hit back in the 10 minutes before half-time, however, with Dymphna O’Brien setting up Mulcahy for the Shannonsiders’ second point from play in the 22nd minute.

Indeed, Limerick will feel they might well have enjoyed a bigger reward from the move which led to the score as midfielder Katie Campbell appeared to be fouled as she cut in from the right.

With Rebecca Delee and Sarah Carey hugely influential in defence, before the latter moved to midfield in the final quarter, Limerick’s play improved.

Centre half-forward Mulcahy again showed her class just before half time when showing admirable composure to land two terrific frees from under the Hogan Stand.

Limerick switched Caoimhe Costello to midfield and Katie Campbell to wing forward for the start of the second half, while Na Piarsaigh’s Aoife Wilson was sprung from the substitutes’ bench.

Ahane’s Mulcahy pointed Limerick in front two minutes after the restart from another free.

Galway managed to get back on level terms in the 38th minute when full-forward Orlaith McGrath struck over her second point from play.

Indeed, that score seemed to provide a major psychological lift for the Connacht side who tacked on two fine points from play to build a 0-9 to 0-7 lead.

Limerick did manage a second point in the third quarter through Mary O’Callaghan, but Galway were finding their scores easier to come by.

Cheered on by the increasing level of support as throw-in time in the senior final grew nearer, Galway restored their two-point advantage in the 47th minute when Hennelly pointed superbly.

McGrath’s fourth point from play helped Galway into a three-point lead, 0-11 to 0-8, with 10 minutes remaining.

Two pointed frees from Mulcahy brought Limerick to within a point, but Hennelly’s late point sealed victory for Galway.