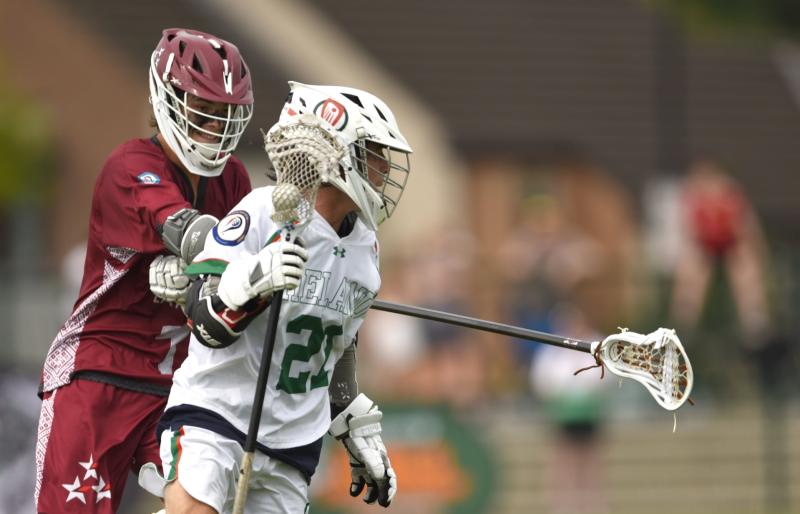 THE Ireland U21 Lacrosse team played their final group game in the 2022 World Lacrosse Men’s U21 World Championship at UL on Sunday afternoon when easing past Latvia 20-1.

After winning their opening games and sitting top of their group everything was looking good for the Irish team. This was the case as they beat Latvia as their ease.

It wasn’t until five minutes into the first quarter when Ireland broke the deadlock as Sean Horkan fired in his first of the tournament. After this early goal the young Irish team took control adding four more goals in the quarter.

The first came from Ronan Walsh before Fionn Kinsella added his name to the scorers. Horkan netted his second before Foley finished the scoring in the opening quarter.

The second quarter was much the same from this Irish team as they looked dangerous every time they drove forward. Foley goaled twice more with an assist from Dempsey to finish his hat-trick. Ben Collins then scored an outrageous behind-the-back goal.

The Irish midfield were controlling the game, this resulted in Kevin Somerville driving forward to finish the sides scoring in the first half. The third quarter of this tie was a complete Irish onslaught on the Latvia goal as they scored on nearly every attack, adding seven more goals.

Horkan doubled his tally with two more, as did Walsh. Aidan Dempsey came off the bench to finish a fine flowing move before Somerville added to his account. The last goal of the quarter came from the stick of Sean Loftus to give his side a seventeen goal lead.

The final quarter was a much tighter affair as Ireland only netted three more goals. Walsh was on fire as he netted after the whistle. Latvia managed one consolation goal with six minutes to go.

With three minutes left on the clock, Aidan Kearns came off the bench to net two more goals for his side.

Ireland will play the third place team in the other group which will be either Czech Republic or Israel with that game being played today, Monday.

SATURDAY afternoon saw the Irish U21 lacrosse team take to the field for the second game of the world championships which was played on home soil at Maguire's Field in the University of  Limerick.

Jamaica managed to gain early control winning the first face of the game. After a period of pressure on the home side’s goal they weren’t able to make the breakthrough as the Irish defence stood strong led by goalkeeper Joe Walsh.

With nearly five minutes gone in the quarter and against the run of play, the home side took the lead as Jack Songer managed to fire into the opposition net.

The Jamaicans kept the pressure on and they even managed to level the tie just before the whistle for quarter time. However, this goal was not allowed stand due to an illegal stick. With moments to go on the clock Aidan Dempsey doubled his side's lead.

The second quarter was a much more open affair as both sets of attackers were starting to get the better of their defensive opponents.

Within minutes of the resumption Dempsey added a third goal for his side as the Irish team were starting to control this tie. Ireland’s attack was looking dangerous, this time it was the stick of Conor Foley who finished into the net for a four-goal lead.

With five minutes left on the clock and against the run of play, Jamacia started to pressurise the Irish defence. This pressure paid off as they netted twice in the space of a few minutes and a comeback looked on the cards. Then in the last minute of the quarter, Ireland broke forward on the counter.

It was Foley again who netted right on the whistle to give his side a three goal lead at half time.

After the break Jamacia managed to narrow the gap again. With the quarter only meant to be fifteen minutes this one ended up running to nearly half an hour with all the stoppages. It was after one of these stoppages when Ireland were a man up that Dempsey managed to goal again.

Foley added another at the end of the quarter to further increase the pressure on Jamacia. Fionn Kinsella broke through the defence after a great pass from Jack Doherty to goal.

The final goal for the home side was from the stick of Sean Loftus after an assist from Sean Horkan. Jamaica managed to pull back two consolation goals to leave four between the sides at the full time whistle.

HISTORY was made on the fields in UL on Wednesday evening as it hosted the U21 world lacrosse championship.

With 23 teams competing, it is an exciting 10 days of competition in Limerick.

For anyone new to the sport of lacrosse, the game is played in four quarters with substitutes rolling on and off all game.

After the opening ceremony, the Irish team got there campaign up and running with a game against Germany and won on a score line of 12 goals to 5. The Irish team, made up of players from England and the USA, had only trained together on a handful of occasions before the tournament.

The Irish team flew out of the blocks and with a minute on the clock, Liam Horkan controlled a pass before firing into the net to give his side a dream start to the tie and tournament.

Ireland kept the attacks and pressure on Germany, but their net minder was in fine form managing to keep out any goal bound efforts.

The Germans managed to level the tie against the run of play ten minutes into the tie. With a minute left in the quarter, the Germans took the lead as they were threatening on the counterattack.

After a nervy opening quarter from both sides, the second quarter was much more open as goals were flying in from both sides. Similar to the first quarter, Ireland took control and levelled the tie with a goal from Jack Doherty who drove forward from midfield. Moments later the Germans managed to take the lead again as both sides were shooting on every occasion.

Both keepers were on top for the next ten minutes of play. This was until Doherty finished well after some great work from Aidan Dempsey. This looked like the tie would be level going into the half-time break.

This wasn’t the case as the Germans managed to break through to score on the whistle to give themselves the lead.

The third quarter also known as the moving quarter in other sports was a full on Irish onslaught. The home side levelled the tie when Conor Foley cut back against the defence before sliding the ball past the German net minder.

The Irish team were flying at this point firing in the next four goals. Jack Galvin burst forward to feed his teammate to give his side a well-deserved lead. Horkan burst through for his second, before the ever dangerous Dempsey netted two more before the end of the quarter.

The final quarter was much more of the same from the Irish team as that man Galvin was flying up and down the field at every opportunity. His run this time ended up with another Conlan finish.

Conor Foley was on fire in the Irish attack as he added two more goals to his tally. It was Dempsey who finished the
scoring for his side. The Germans fired a late consolation before the final whistle.