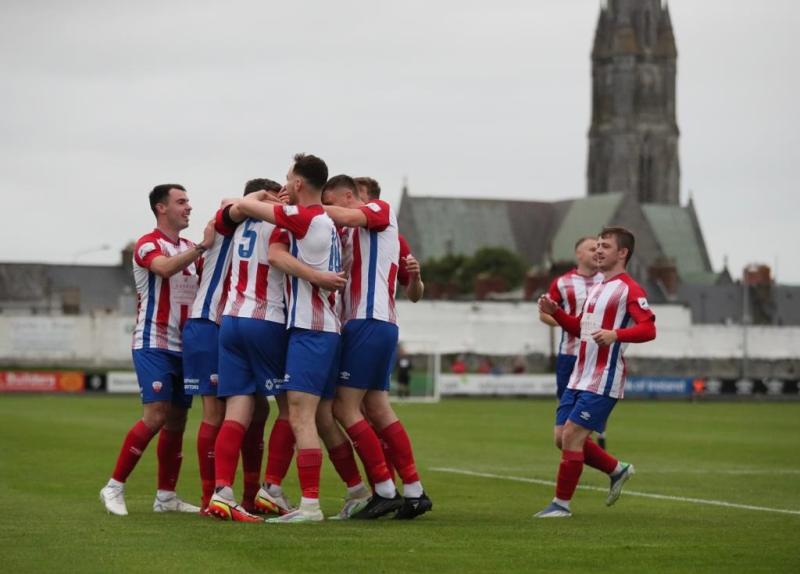 Treaty Utd celebrate during their 5-0 win over Usher Celtic in the Markets Field. PIC: Keith Wiseman

Sean Guerins had Treaty ahead at the interval. Two strikes from Dean George as well as efforts from subs Enda Curran and Success Edogun left the home fans happy with their nights work.

Marc Ludden provided two assists for the first two as Tommy Barrett made some changes to his XI.

Before a sparsely populated Markets Field, Barrett’s side secured their first-ever victory in the competition after falling to Dundalk at the first hurdle last season.

Despite a sluggish start, the hosts hit the front after six minutes with their first attack. Marc Ludden delivered a wonderful corner, which Guerins powered in off the bar for his first United goal.

The Treaty goal was under more pressure than some would have predicted. Gareth Kilkenny had a huge opening on 21 minutes, but was wayward with his second effort after an initial save at close range from Conor Winn.

The Leinster Senior League side only start their season in the coming weeks, played some good football and caused an-experimental home side some issues.

But once George finished low on 48, Treaty were dominant. He repeated the trick soon after before Enda Curran added to his growing tally.

There was time for summer signing Success Edogun to open his tally. The pacy attacker drilled home from 20-yards with the final act of the contest, as Usher begged for some mercy from the Limerick outfit.

Treaty return to action when they entertain Waterford FC on Friday August 5.